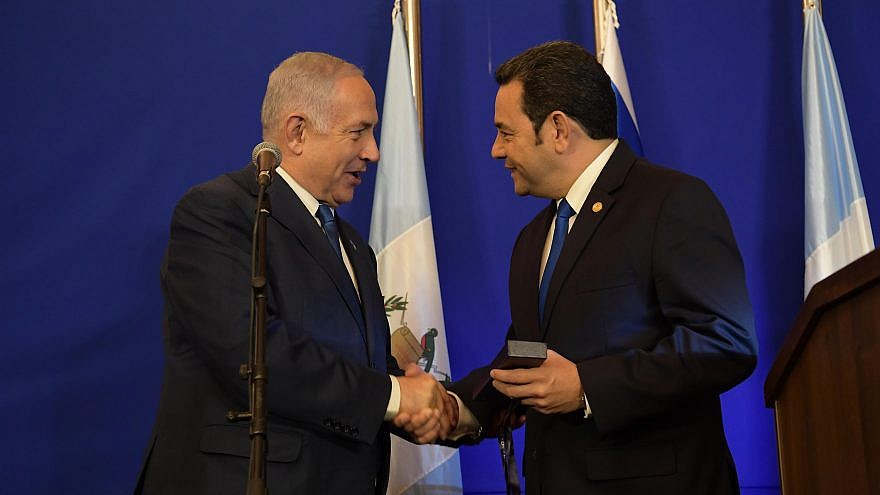 (May 16, 2018 / JNS) Just two days after the United States opened its embassy in Jerusalem to much fanfare, Guatemala made its move to open its embassy in the Israeli capital.

Guatemala’s President Jimmy Morales said: “With the opening of our embassy in the city of Jerusalem, Guatemala takes a courageous decision, a step forward in favor of union and friendship. This decision will be a legacy that will bring great benefits to everyone.”

Israeli Prime Minister Benjamin Netanyahu called the opening “a great day” for both Israel and Guatemala.

“I welcome my friend President Jimmy Morales,” he said. “Guatemala was with us at the beginning and Guatemala is with us today, and we welcome the opening of the embassy in Jerusalem.”

Despite being a small and largely impoverished Central American country, Guatemala has long represented an important partner for Israel. In 1947, it became one of the first countries to voice support for the creation of the Jewish state; in 1956, it became one of the first Latin American countries to open an embassy in Jerusalem, although it later relocated the mission in 1978 to the Tel Aviv suburb of Herzliya.

Today, as Israel is attempting to build nontraditional allies around the world, Guatemala has expressed an interest in bolstering agriculture, science, technology and security ties with the Israelis.

Following Guatemala and the United States, Paraguay plans to move its embassy by the end of the month, while leaders in Romania, Czech Republic and Honduras are also contemplating a move.