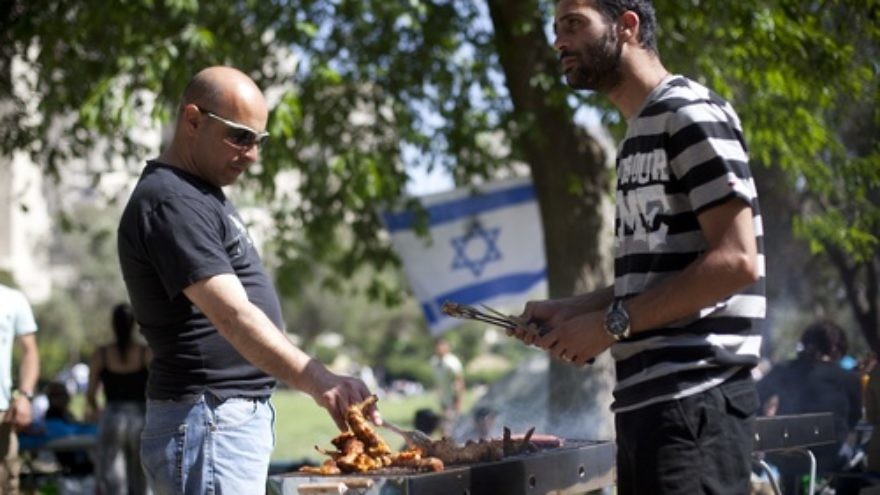 (April 2, 2014 / JNS) For one day in the spring, the humble falafel is all but forgotten as Israelis fire up their grills for some serious meat-eating. In that way, Yom Ha’atzmaut (Israel Independence Day), which falls on the fifth day of the Hebrew-calendar month Iyar, is not all that different from its American counterpart, the Fourth of July.

On this holiday, marking Prime Minister David Ben-Gurion’s announcement of Israel’s independence at the stroke of midnight on May 14, 1948, you’ll find musical and theatrical performances on street corners; Israeli dancing and sing-alongs, speeches, and classic Israeli movies shown on TV and radio; and Israeli flags fluttering from windows and balconies and car antennae. Sheet cakes are decorated with the blue and white colors of Israel’s flag, and the air is filled with the smoke of barbecue grills.

New olim (immigrants) are celebrating not only Israel’s freedom to exist as an independent Jewish state, but also their own transformation into Israeli citizens, with those from the U.S. trading in their July 4 Hebrew National hot dog for a Fifth of Iyar all-Israeli kabob.

“The first time a new citizen celebrates Yom Ha’atzmaut, they are exhilarated that only a year earlier they were dreaming of making Israel their home and now they are a full part of their Jewish homeland,” says Rachel Berger, who heads up the Post-Aliyah Department of Nefesh B’Nefesh, which brings thousands of new olim to Israel each year.

Not everyone will be lighting a personal grill on the holiday. Business is booming for Israeli restaurants on Yom Ha’atzmaut, with families taking advantage of the return of spring. Many workers use the day off to go on tiyulim, or day trips. In Zichron Yaakov, at the Italian restaurant Adama Bistro, manager Dganit Azolai expects the usually popular pasta specialties to be largely ignored in favor of meats of every kind, especially beef on the grill or other barbecue items.

As a variation on the meat theme, the kosher Chinese restaurant Chon Lee in Ashdod finds its annual Yom Ha’atzmaut favorite to be crispy Chinese duck, says owner Jung Lee, who has now added the Hebrew and English languages to his native Mandarin.

Boaz Fisafasavich, whose Beit HaStek in Haifa attracts an international crowd hailing from France, the U.S., and the former Soviet Union (FSU), says the immigrants demonstrate at least as much enthusiasm for Israel Independence Day—and for the traditional steak—as do his Israeli customers. “They’re new here,” says Fisafasavich. “But, no matter where they come from, they read the newspapers too, so they know what is going on and how lucky we are to be here.”

That is the case for Yehudah Zaragoza, who arrived in Israel last year from Iran with his wife and two small sons. This year is the first time Zaragoza has the chance to celebrate the existence of his new home country. Living in the immigrant absorption center in Ra’anana, he plans to toast the Jewish state with the other newly minted Israelis from Spain, Brazil, India, France, the U.S., and the FSU.

Mati (Matthew) Katz, from New York, happened to be visiting a daughter in Israel last Yom Ha’atzmaut before he made aliyah this winter. “The irony is, I made aliyah this year but this is my second Yom Ha’atzmaut,” says Katz, who is now living in Maaleh Adumim and waiting for his wife to sell the family home and join him there.

“It was wonderful last year with my wife and all three of our daughters here, but I know it will be something very different this year now that I am a citizen,” Katz says. “I had visited here many times, but there was something very powerful about having a one-way ticket to Israel. This year for the first time, I am celebrating as an Israel citizen.”

Israelis are determined to celebrate their hard-earned freedom—even in the country’s south, where alarms go off with frightening frequency. This is Massachusetts native Bracha Vaknin’s fifth year in Israel, and she says she’s still enjoying the “miracle of being surrounded by other Jews.” But living in Netivot, a 10-minute ride from Sderot, she and her family have gotten used to the alarm going off on her iPhone, signaling a siren anywhere in southern Israel. Vaknin and her husband and children spent nearly two weeks in a shelter two years ago, and this March she was waiting for her daughter’s ballet class to end when they were all sent to shelters in Netivot’s community center. “We’re hoping for a quieter year,” she says.

The level of alert doesn’t detract from the celebration of Israel on Yom Ha’atzmaut, says Vaknin, who is looking forward to her father’s kin’s annual “ritual family barbecue,” where she will enjoy the holiday with uncles and aunts and cousins.

Yet not everyone is happy with at least one aspect of Yom Ha’atzmaut. Over at the Village Green Restaurant—located near Ben Yehuda Street and the countless Yom Ha’atzmaut bands, performances, and parties that will color the Fifth of Iyar in that area—the fact that Barry Sibul’s establishment is vegetarian takes the edge off business on Independence Day, he says.

“There is an amazing quantity of meat consumed on that day in Israel,” he says with a sigh. But not to be outdone, Sibul is making sure to stock up on plenty of veggie burgers.

“That way,” he says, “even vegetarians can have something that at least looks a bit like meat.”