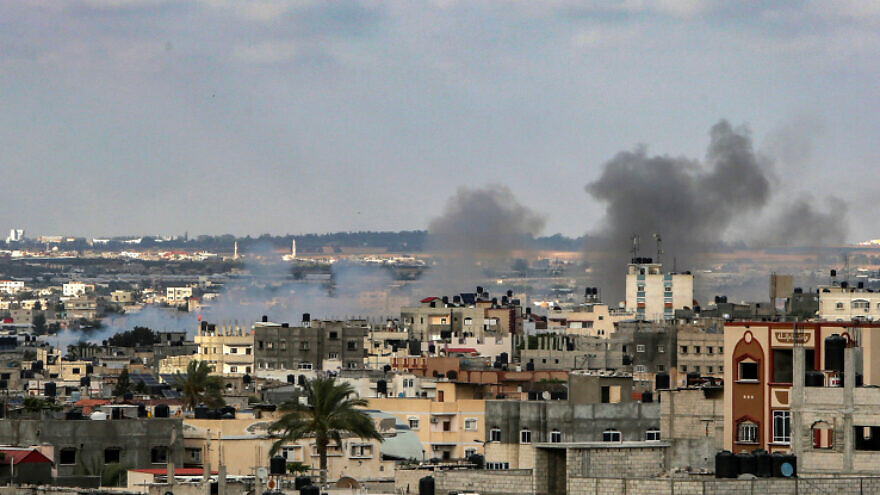 An Israeli air strike on a target in Rafah, in the southern Gaza Strip, on May 20, 2021. Photo by Abed Rahim Khatib/Flash90.
Spread the word.
Help JNS grow!
Share now:

An Israeli civilian working on the security fence near the northern Gaza Strip sustained minor injuries at noon, apparently due to Palestinian sniper fire, the IDF Spokesperson’s Unit said.

Palestinian media reported that the Israeli military responded to the shooting with artillery fire towards a number of Hamas sites in the Strip.

The incident comes amid a series of lone-wolf terrorist attacks in Judea and Samaria and Jerusalem, as well as several security incidents involving Palestinian prisoners jailed in Israel, as well as threats of escalation by the Gaza-based terrorist groups.

The Defense Ministry said that the victim “is an employee of a civilian company contracted by the ministry, who carried out routine maintenance work on the security fence. He sustained minor injuries to his leg and was treated on-site before being evacuated to the Brazilian Medical Center in Ashkelon.”

Hamas, the terrorist group controlling the Gaza Strip, and the Palestinian Islamic Jihad are frustrated by the impasse in the ceasefire talks with Israel and have increased their threats of escalation over the past few days.

Palestinian media reported that the maneuvers “seek to convey political and military messages to Israel and the other mediators” that Hamas and the other groups in Gaza are growing impatient with the sluggish attempts to broker a long-term ceasefire between the Jewish state and the Islamist terrorist group.