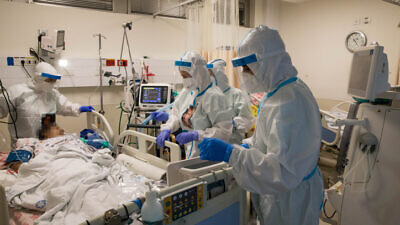 news
US points to Iranian belligerence as justification for sanctions snapback
Israel KasnettJNS
The Trump administration, along with many foreign-policy experts and Mideast leaders, believes Tehran has not adhered to the letter of the nuclear deal, nor has it acted in good faith.
briefUS sanctions Iranian officials, including judges and court
“The actions taken by the United States expose Iran’s revolutionary courts and their judges for what they really are: tools designed to enforce the Iranian regime’s brutal ideology and suppress dissent,” said U.S. Secretary of State Mike Pompeo.
briefUS reimposes UN sanctions, adds new measures on Iran
Moreover, emphasizes U.S. Secretary of State Mike Pompeo, the United States expects “all U.N. member-states to fully comply with their obligations to implement these measures.”
briefFrench president dismisses US ‘maximum pressure’ campaign against Iran
Iranian President Hassan Rouhani told the U.N. General Assembly that “Iran is not a bargaining chip in U.S. elections and domestic policy.”
Scroll to view more
Republish this article
731 WORDS
Spread the word.
Help JNS grow!
Share now:

(November 8, 2018 / JNS) Typically, declarations of war are issued by an aggressor. In this case, we are issuing a declaration of war in response to a war declared against our people hundreds of years ago yet denied by so many of my co-religionists.

As the founder and president of the Legion self-defense and counter-terrorism training program I keep getting calls and emails asking me what I think about what happened in Pittsburgh. Don’t ask me what I think. Don’t ask me for my thoughts. My actions provide your answer.

While the rest of Jewish leadership has discussions, wine-tastings and suggestions for the rest of us, we have built an army of America’s new Jews.

As you form committees to decide if there is anti-Semitism we train to take down an active shooter.

As you create graphics to share online, we are trained in combat first aid.

As you form committees to honor each other, we train young men and women to take a punch, smile and destroy their enemy.

You have lived among the “other” for three generations, yet many of you still don’t understand them. Nor do they understand you.

Strength and weakness is all that the world understands. The Israeli Jews were forced to figure this out by necessity.  But even they forget sometimes.

Early American Jews figured it out quickly. But then, a more comfortable, naïve version of Jewish leadership took over after a safe place was established for us. Overplaying our hand and losing sight of the dangers from our past. Attaching ourselves to art galleries and fundraisers for Africa, thinking this would defend us against being seen as outsiders.

We must remember that we are the people of the book and the sword. We need both. However, I will undoubtedly be seen as a savage by many of you. But before you cast judgement, ask yourself if your ivory tower is high enough to escape the reach of the mob? Will your doorman lay down his life for you and your family? And as the mob approaches, will your instinct be to pick up the phone or pick up your fists?

I am a Jew who is free from fear. But your fear incites the mob. It invites aggression against the rest of us. I will face my enemies with my teeth showing and my adrenaline high. And should I meet my maker that day, I will do so on my feet, I will take some of them with me, and I will drink in Valhalla with my fellow warriors of all kinds.

And I bet you are still trying to figure out my angle. Our angle. We have none.

We don’t need your support.

We don’t need your money.

We don’t need your ideas.

We don’t need your blessing.

You and your children need us to train you. We are writing this letter for those in your ranks who seek another way.

We are not scared. We are ready.

So who are we declaring war against? Anyone who tries to hurt us. Let this be our official notice. We will exercise our right to defend ourselves if you try to attack us. We will use proportionate force that a reasonable person would use to defend their family.

What does that mean? Well, in typical American Jewish parlance that would mean we would pen a strongly worded email of outrage. But to the rest of Americans—and to our band of brothers and sisters—it means if you try to kill us or our families, you will die trying. Whether you are a foreign or domestic enemy, your fate will be the same. And we will have fulfilled one of G-d’s commandments and the American dream all at the same time. G-d helps those who help themselves, and America loves an underdog who fights back.

After all, we live in the land of the free and home of the brave. I’m quite sure that the members of our army live free. Free of fear. Free of having to rely on others for our protection. As for being brave, we believe that we are brave. We shall see.

Jon Loew is the founder and chairman emeritus of Fuel For Truth (2001) now a part of the ZOA, and founder and president of the Legion self-defense and counter-terrorism training program (2014).