(July 27, 2022 / JNS) A new documentary, “The Devil’s Confessions: The Lost Eichmann Tapes,” will allow viewers to hear Adolf Eichmann speak about his role in the Final Solution. The recordings were made during interviews in Argentina conducted by Dutch journalist Willem Sassen in 1957. The public never heard them, but Life magazine published some transcripts in 1960. Probably few people outside of Holocaust scholars have ever read the articles (the film itself is in Hebrew and German, with English subtitles).

Here are some of the lowlights of what Eichmann admitted.

“I was merely a little cog in the machinery that carried out the directives and orders of the German Reich. I am neither a murderer nor a mass murderer. I am a man of average character, with good qualities and many faults. … Where I was implicated in the physical annihilation of the Jews, I admit my participation freely and without pressure. After all, I was the one who transported the Jews to the camps. If I had not transported them, they would not have been delivered to the butcher.”

Could he have disobeyed his orders?

“If I had sabotaged the order of the one-time Führer of the German Reich, Adolf Hitler, I would have been not only scoundrel but a despicable pig, like those who broke their military oath to join the ranks of the anti-Hitler criminals in the conspiracy of July 20, 1944.”

Eichmann said he was encouraged by his boss, Reinhard Heydrich, to study the theology of Judaism, and he spent more than two years learning to speak Hebrew but was not proficient. He visited Palestine in 1937 to find out when a Jewish state would be established and was “impressed by the way the Jewish colonists were building up their land. I admired their desperate will to live, the more so since I was myself an idealist.” He added that if he were a Jew, he would have been a “fanatical Zionist.”

The purpose of the yellow star, said Eichmann, was “to control the natural tendency of our German people to come to the aid of someone in trouble. The marking was intended to hinder any such assistance to Jews who were being harassed. We wanted Germans to feel embarrassed, to feel afraid of having any contact with Jews.”

Even in the candid interview, Eichmann told some whoppers, such as claiming he and his SS comrades opposed “the crude devices of burning temples, robbing Jewish stores and maltreating Jews on the streets. We wanted no violence.”

Eichmann said that Hitler ordered the physical annihilation of the Jews in 1941. “What made him take this step, I do not know.” Shortly thereafter, Eichmann learned that Heinrich Himmler had ordered the end of all Jewish emigration. Eichmann and his men would not have anything to do with the “physical liquidation”; their job was to round up the Jews.

“By this time, the formula ‘Final Solution for the Jewish Question’ had taken on a new meaning: liquidation.” This was discussed at the Wannsee Conference, which Eichmann made sound like a festive party where participants drank cognac, smoked cigars, jumped on the tables and sang songs.

The order to annihilate the Jews was never put in writing, according to Eichmann. Instructions were given orally. He was in charge of managing the deportations. “My interest here was only in the number of transport trains I had to provide. Whether they were bank directors or mental cases, the people who were loaded on these trains meant nothing to me. It was really none of my business.”

“I am no anti-Semite. I was politically opposed to Jews because they were stealing the breath of life from us,” said Eichmann. By contrast, the Romanians “astonishingly” liquidated thousands of their own Jews and Slovakian officials “offered their Jews to us like someone throwing away sour beer.”

Eichmann said that in the latter part of 1941, he saw the initial preparations for the extermination of the Jews. He visited Maidanek and saw the gas chambers. He also was sent to Minsk where, for the first time, he witnessed the execution of Jews:

They walked the last 100 or 200 yards—they were not driven—then they jumped into the pit. It was impressive to see them all jumping into the pit without offering any resistance whatsoever. Then the men of the squad banged away into the pit with their rifles and machine pistols. 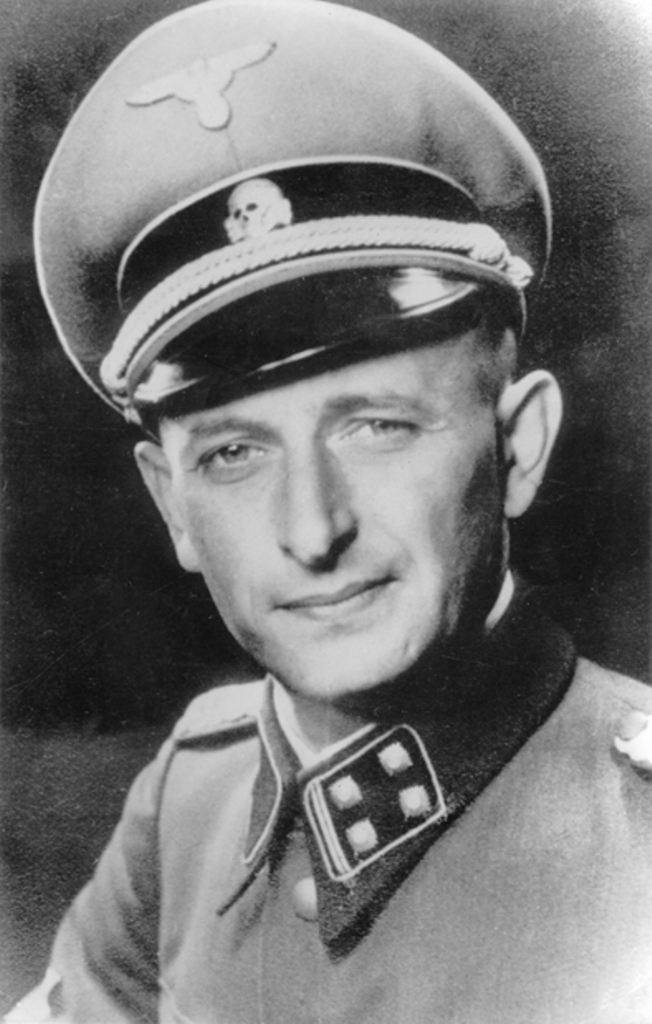 Why did that scene linger so long in my memory? Perhaps because I had children myself. And there were children in that pit. I saw a woman hold a child of a year or two into the air, pleading. At that moment all I wanted to say was, “Don’t shoot, hand over the child … .” Then the child was hit. It was so close that later I found bits of brains splattered on my long leather coat. My driver helped me remove them. Then we returned to Berlin.

Eichmann also went to an area near Lodz where he watched Jews loaded on buses flooded with carbon monoxide from the exhaust. When the bus stopped near a pit, he said, “the doors opened. Some Poles who stood there jumped into the buses and threw the corpses into the pit. I was badly shaken by what I then saw. Another Pole with a pair of pliers in his hand jumped into the pit. He went through the corpses, opening their mouths. Whenever he saw a gold tooth, he pulled it out and dumped it into a small bag he was carrying.”

“If I had known then the horrors that would later happen to Germans,” he said, “it would have been easier for me to watch the Jewish executions. At heart, I am a very sensitive man. I simply can’t look at any suffering without trembling myself.”

Eichmann visited Auschwitz several times. “It had an unpleasant smell,” he said but denied knowing anything about how the gassings were done. He said he learned after the war that two-and-a-half million Jews were killed but found the figure “incredible.” He insisted many Jews had been sent on work details and survived. “After the war, the Auschwitzers sprouted like mushrooms out of the forest floor after a rain. Hundreds of thousands of them are today in the best of health.”

Eichmann stated, “The father of the ghetto system was the Orthodox Jew who wanted to remain by himself.” After invading Poland, “we merely regulated those, sealed them off with walls and barbed wire, and included even more Jews than were already dwelling in them.”

He said that “the assimilated Jew was of course very unhappy about being moved to a ghetto. But the Orthodox were pleased with the arrangement, as were the Zionists. The latter found ghettos a wonderful device for accustoming Jews to community living. Dr. Epstein from Berlin once said to me the Jewry was grateful for the chance I gave it to learn community life at the ghetto I founded at Theresienstadt. … He said it made an excellent school for the future in Israel.”

The Warsaw Ghetto Uprising surprised Eichmann. “I could not believe, seeing the pictures, that men in a ghetto could fight like that.” Afterward, he was sent to Hungary to ensure there would not be another revolt. “We could and did use the Warsaw example like a traveling salesman who sells an article all the more easily by showing a special advertising attraction.”

Eichmann estimated that 350,000 Hungarian Jews were deported to Auschwitz in four months. His men were “shocked by the inhumanity of the Hungarian police,” but he admitted some of the Germans “were guilty of roughness here and there.” He said, “I once saw a soldier beat a frail old Jew over the head with a rubber club. I spoke to the soldier, reported him to his commander, and demanded he be punished and demoted. Himmler would not stand for that kind of thing. That is sadism.”

He contrasted the treatment of Jews with the deportations conducted by the Allies after the war. “The operation was not carried out the way we did it, with Prussian exactness about provisions and transportation.” When the Germans were in charge, said Eichmann, guards could ensure “fresh water was provided and the slop buckets emptied” because they were “supposed to bring the material to the concentration camp ready to start work, not sickly and exhausted.”

Eichmann contended that Auschwitz could not have been a death camp. If the intent was to kill the Jews, the commandant wouldn’t have complained about finding corpses in the trains. Having said that, Eichmann admits to seeing a grave full of gassed Jews and watching them set on fire. He was unmoved. “When I see your corpses,” he said, “I think of those charred German bodies in the air-raid shelters in Berlin.”

According to Eichmann, most Hungarian Jews were put to work in munitions plants. “That is why there are thousands of Jews happily alive today who are included in the statistical totals of the ‘liquidated.’ ”

Escaping was “child’s play,” he said, as a Jew could reach “relative safety in Romania” if he could pay for a train ticket or car ride to the border.

Eichmann acknowledged the atrocities but still said, “It is clear from the statistics, then, that our operation was not a battle fought with knives, pistols, carbines or poison gas. We used spiritual methods to reach our goal. Let us keep the distinction clear because physical liquidation is a vulgar, coarse action.”