The contrast between the two societies would make for an interesting story in The New York Times, or a segment on, say, “60 Minutes.” Don’t count on either of them—or any other major secular Western news-media outlet—taking an interest in the story any time soon. It’s as if trying to ignite Israel (figuratively and now literally) is the new norm, and thus not newsworthy. 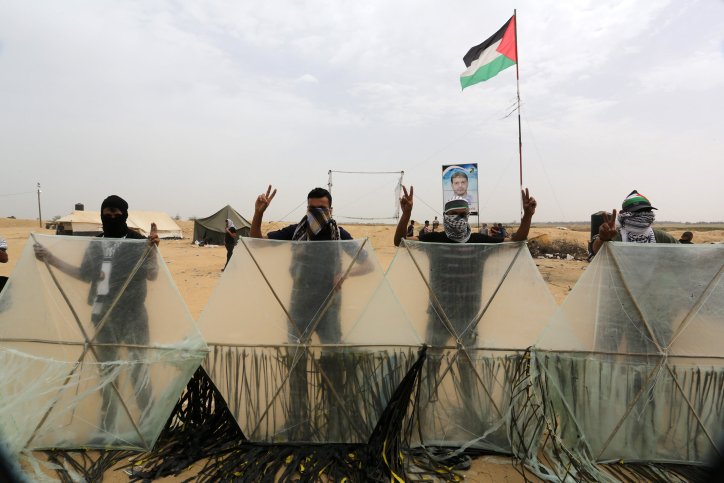 Gazans send ignited kites over the border with Israel as part of the weekly Friday protests at the southern border on May 4, 2018. Photo by Abed Rahim Khatib/ Flash90

For news of the latest attacks, turn to the Israeli news media. There, we learn that Palestinian Arabs in Gaza launched a wave of helium-filled balloons, with flaming Molotov cocktails attached to them, on Monday to fly across the southern border with Israel. Seven of the balloons made it, causing “great damage” (as Ynet put it).

One of the balloon bombs set off a huge fire in the wheat fields of Kibbutz Mefalsim. The destruction, estimated at “hundreds of thousands of shekels,” was especially extensive because harvest time is fast approaching. That’s a devastating amount for a small kibbutz (total population: approximately 1,000).

Like all secular Israeli kibbutzim, Mefalsim is not exactly a bastion of right-wingers. Nor are they “settlers.” The kibbutz was established in 1949, which is to say that it is situated within the post-1948 armistice lines. Remember when Jewish doves used to claim that the Palestinians are opposed only to “settlers” and not to all Israelis? Try telling that to the residents of Kibbutz Mefalsim.

Israel’s finance minister, Moshe Kahlon, visited the area and announced that the government will provide financial compensation to farmers whose fields are being damaged. I’m happy for the farmers, but troubled by the thought that Israeli taxpayers have to pay for damage caused by the Gaza arsonists. Wouldn’t justice be better served if the farmers were compensated with a portion of the various goods on the hundreds of trucks that Israel permits into Gaza each day?

The response of the international community to the kite-and-balloon attacks is also troubling for a number of reasons. The refusal of the news media to take the issue seriously is, of course, appalling. Equally unsettling is the silence of the hypocritical Jewish “peace” groups and misnamed human-rights groups, whose real interest is not peace or human rights, but simply advancing the Palestinian agenda.

Perhaps the most troubling aspect of all this is the way in which Palestinian violence is accepted as a kind of a new norm. I’ve written in the past about the way Palestinian Arabs seem to be treated according to what former presidential speechwriter Michael Gerson called “the soft bigotry of low expectations.”

Treating attempts to burn down Israel as unremarkable—as not even worthy of news coverage—is akin to saying that we should expect Palestinians to behave that way. It’s saying that they are inherently incapable of being rational, reasonable and peaceful.

Imagine the outcry if such a thing was said about any other ethnic, religious or racial group. And the outcry would be completely justified, of course.

Branding all Palestinians as inherently violent is not only racist, it’s downright dangerous. It tries to convince the International community that trying to light Israel on fire is perfectly acceptable because “that’s just how they are.” And if that becomes the new conventional wisdom, the excuses for Palestinian violence won’t stop at flaming kites.