JNS Promo+
Featured Webinars
JNS is partnering with pro-Israel organizations to promote relevant Webinars and recorded lectures on current events during the Coronavirus crisis.
JNS Promo+Erdogan and the former Ottoman territories, including Jerusalem
Thursday, May 21, 2020 at 12 p.m. Eastern — How does Turkey see its role in the former Ottoman territories? Find out how President Erdogan’s Turkish nationalism mixes potently with Islamism on Thursday’s conference call.
JNS Promo+Lecture: Understanding and Analyzing Israel’s Reopening Plan Together
Thursday, May 21, 2020 | 11AM EDT - Understanding and Analyzing Israel’s Reopening Plan Together – Everything You Need to Know About How Israel is Bringing Its Economy Back Online After COVID-19, presented by UJA’s Israel Engagement.
Scroll to view more
Republish this article
623 WORDS
Spread the word.
Help JNS grow!
Share now:

Rep. Rashida Tlaib (D-Mich.) does not hide her feelings of disdain for Jews and Israel. She lumps Jews as “not good” and normally is supported by quasi-Jews who share her hatred for Israel.

On May 15, 2020, Tlaib made a despicable remark, in a tweet, saying, “Today, Palestinians around the world commemorate the Nakba (النكبة), Arabic for “catastrophe” recognizing the ethnic cleansing of indigenous Palestine. 530 Palestinian neighborhoods were uprooted + destroyed +750,000 Palestinians became refugees.”

“Since the establishment of the State of Israel, 70 years ago, the Arab population in the Land of Israel has multiplied six-fold! Muslim Arabs, within the Israeli territory, have better access to modern amenities than in most places in the Arab world.

“As the invasion by surrounding Arab states began in 1948, the Israeli government asked its Arab population not to leave. It promised them protection and citizenship; nonetheless, at the request of the Arab leaders, the attackers who said it would be easier for them to perform their attacks on the Jews if their Arab brothers were absent from the area, many packed and left. Those who left did so of their own free will and with the hope that the Jews would be ethnically cleansed and they will be able to return and resume life in the land from where they left it.

“The fact is that the ethnic cleansing that happened after the establishment of the State of Israel was done to the Jews living in the Arab lands in North Africa and in the Middle East. Muslim countries threatened their Jewish population and expelled them. The 850,000 Jews who, for over 1,000 years, had lived in and contributed to these countries were expelled and ethnically cleansed almost to the very last Jew.

“The ethnic cleansing going on today in the Middle East and northern Africa is being done mostly by Arab-Muslim leaders and jihadists who are systematically purging these areas of age-old Christian communities, indigenous tribes, and remnants of the few Jews remaining in these areas.” 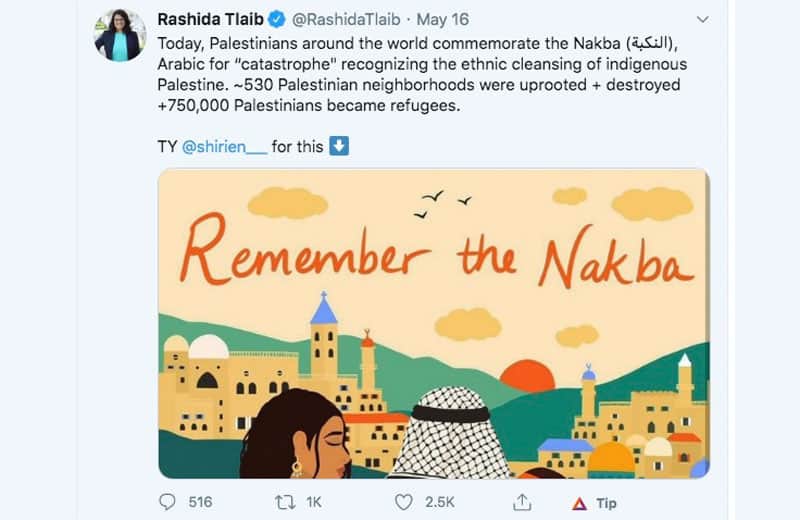 In Tlaib’s words: “The existence of the State of Israel is an ‘ethnic cleansing’ of Muslim Arabs.” This is a lie, often used by Israel’s detractors. And these detractors will use all lies available to them and make new ones as they go along to shine negative light on the Jewish state, Israel.

The nakba is a carefully crafted 72-year-old lie designed to usurp the documented facts in order to deny Israel its legitimacy. The ultimate goal, of course, is to destroy the world’s only Jewish state.

Tlaib is a sitting congressional representative regularly engaged in anti-Jews blood libel and historical revisionism similar to the ones coming from the Holocaust denier.

The Democrat Party will ignore Tlaib’s nakba tweet. After all they wouldn’t/couldn’t pass a House resolution against anti-Semitism. Most major Jewish organizations have failed to protect Jewish interests and to represent well Jewish issues. Therefore, they will not step up because they are afraid they will not be welcome to the interfaith-diversity big tent.

The sha-shtil galut* (*Jews in exile) mentality in action is so very typical and embedded in the Jewish DNA.

Rabbi Aryeh Spero is spokesman for the Conference of Jewish Affairs; author of “Push Back: Reclaiming Our American Judeo-Christian Spirit”; president of Caucus for America; and a frequent commentator on Fox News.