(June 12, 2020 / JNS) As long as we’re tearing down monuments and statues to alleged racists, why not trash the anti-Semites while we’re at it?

That’s the attitude of some Jews to the rerun of China’s Cultural Revolution currently playing on our televisions screens in which woke protesters are seeking to erase all evidence of alleged evil racists on display in the public squares of the world. The reaction to the callous murder of George Floyd at the hands of a Minneapolis policeman has provoked a necessary debate about police brutality and racism, even though many of those who are seeking to guide that discussion are operating under some misconceptions about the facts about police killings.

The problems with the protests go beyond such distortions, or even the fact that in some cases, rioting and looting followed. What we are now faced with is a surge of revisionism, moral preening and virtue signaling about racism that is seeking to retrospectively erase or “cancel”—to use the language of social media—much in our history, art and literature that is alleged to represent its racist past.

A fair-minded observer might respond to this spasm of iconoclasm by suggesting that we not stop with statues of those who owned or traded slaves, fought for the Confederacy, sought to have American slaves returned to Africa (Abraham Lincoln) or was a defender of British imperialism (Winston Churchill), despite their heroism and essential roles in defending the right. We could then go on to include prominent anti-Semites on the list of those to be toppled from their famous perches.

If we were to do that, rampaging Jews could join the anarchists in the streets and start by decapitating most busts or statues of leaders of the Roman empire for their atrocities against the Jewish people—a task that would include dynamiting the Arch of Titus, which depicts the enslavement of Jews and the looting of the Second Temple, and renaming Hadrian’s Wall in northern England (named for the emperor who built the amazing structure that stretches across the entire island of Britain, but who also laid waste to Judea murdering countless Jews during the Bar Kochba revolt).

We could go on to knock down statues of all medieval and early modern European monarchs who discriminated against or persecuted and murdered Jews (it would be easier to list the ones who didn’t attack the Jews than the ones who did), as well as some, but not all, of the popes. The list of anti-Semitic modern statesman, in addition to thinkers and writers is equally lengthy.

And since a recent feature on NPR suggested that people reject their white privilege, as well as atone for racist thoughts and actions (whether or not they are personally guilty of such behavior) by “decolonizing your bookshelf” through discarding all books that are tainted by racism or merely white privilege, we could also insist that anti-Semitic authors be canceled. That means goodbye William Shakespeare (“Merchant of Venice”), as well as just about everyone in the Western canon in the medieval and early modern period, and even seemingly enlightened writers like Voltaire. Throw out your copies of Charles Dickens (Oliver Twist), Anthony Trollope (The Way We Live Now), T.S. Eliot, Ezra Pound, Evelyn Waugh, Graham Greene and lots of others.

As for music, you could demand that opera companies adopt Israel’s ban on the music of Richard Wagner, and that just about all of the European composers of the 17th, 18th as well as many in the 19th and early 20th centuries be canceled for their anti-Semitism.

As for art, troubling depictions of Jews in Christian religious art abound, so museums should be compelled (by their generous Jewish donors) to toss them or at least send them to storage. As for the modern era, there are lots of troubling examples, but let’s insist that we see no more of the great paintings of Edgar Degas, Pierre-August Renoir and Paul Cézanne because of their anti-Semitism, which manifested itself in support for the false charges against French Jewish Capt. Alfred Dreyfus.

If you feel like defacing national monuments, you could spray paint something nasty about Franklin Roosevelt on the one in his honor for his refusal to rescue Jews during the Holocaust. Or you could visit Grant’s Tomb in New York City and remind the few who visit that shrine to the man who won the Civil War that at one point he tried to throw Jews out of Tennessee and Kentucky.

And if you’re in the mood to delete films from streaming service catalogues, such as the way “Gone With the Wind” is being axed, you could demand that they toss out Martin Scorsese’s “Last Temptation of Christ” or Mel Gibson’s “The Passion of the Christ” for the way Jews were depicted in them or the way they reinforced deicide myths (even though most Christians just think they’re stories about Jesus and generally ignore the troubling parts about Jews).

That’s a lot of canceling on our list, and I’ve barely scratched the surface of all we could do.

But we shouldn’t do any of that. 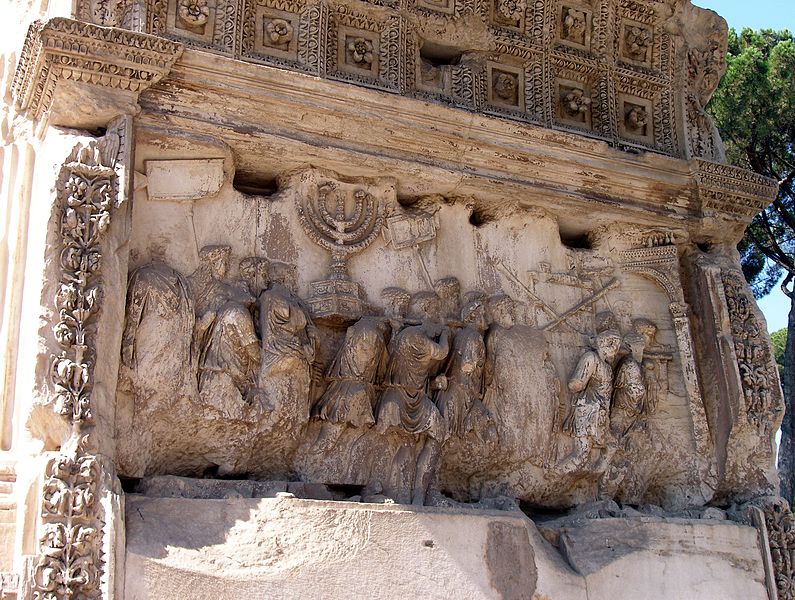 The south inner panel of the Arch of Titus in Rome, a close-up relief showing spoils from the fall of Jerusalem. Credit: Dnalor 01 via Wikimedia Commons.

The world, including the Jews, would be diminished by the erasure of the great works of Western civilization that can be linked to anti-Semitism. We should seek to provide context and to speak out about the commonplace hatred for Jews that was so much a part of the last two millennia. But we should not join those seeking to vandalize, hide away or delete those things that are linked to troubling ideas or actions of the past.

As with our justified Jewish grievances, one can make a case for removing reminders of the Confederacy, which was both racist and treasonous or of anything else linked to slavery.

But what’s going on isn’t really about slavery, the Civil War or even America’s horrifying century of Jim Crow discrimination and segregation. Nor are the efforts to “defund the police” or to eliminate positive portrayals of the police (like the children’s cartoon “Paw Patrol” that some especially foolish people want thrown off the air) about confronting police brutality and modern-day racism.

The same is true for those who want to prevent the views of conservatives like Sen. Tom Cotton (R-Ark.) from a hearing in mainstream media, or for those who are seeking to purge contemporary art and theater of all vestiges of that catch all term of white privilege. It also applies to those who are trying to claim that words like “riots” and “looting” are inherently racist, even if this is utter nonsense.

What is going on is an effort to essentially challenge the foundation of Western civilization. It is illiberal in that while posing as opposition to hate, it seeks to eliminate freedom of speech and thought. It prizes “safety”—ensuring that no one is confronted not only by hateful things but by any thought or idea that contradicts their personal assumptions and biases—over liberty and freedom.

And it is expressed in a latter-day McCarthyism in which all those who don’t conform to the fashion of the day are hounded, shunned and silenced. Those who challenge the assumptions of the Black Lives Matter movement, even if they are outspoken against racism, are branded as racists. Even those who stay silent and refuse to recite the current catechism of guilt are now being canceled; hence, the rush of individuals, organizations and companies to insincerely virtual signal and genuflect to the BLM idol.

They may be currently taking down statues of people you don’t like, or tossing out books and films you think are bad, but the Bolshevik spirit of this movement will never apply to anti-Semitism. In fact, eventually it will be applied to the perennial Jewish scapegoat and Zionism, which is falsely linked to white privilege and colonialism.

That’s why the only thing for principled persons to do now is stand up against this impulse. Though so much of contemporary culture is pushing us towards compliance with cancel culture, we must summon up the courage to resist all outrage mobs, and to refuse to virtue signal or denounce those who fall afoul of the self-appointed arbiters of wokeness. We should defend Western civilization—warts and all—against those who wish to consign it to the dustbin of history. The alternative is not only a catastrophe for the West, but also for the Jews.