(June 16, 2021 / JNS) Regular readers of my column know that I like to bring some historical perspective to current affairs that is missing from most reporting and analysis. I happened upon some interesting tidbits that may help us understand the recent fighting between Israel and Palestinian terrorists in Gaza, and the real reason peace is unlikely, if not impossible.

Israel has been complaining since the signing of the Oslo Accords (and before) about Palestinian incitement to violence against Israeli Jews. The Israelis and various outside analysts have repeatedly highlighted that young Palestinians are indoctrinated to hate Israelis through textbooks, maps and the media, and warned year after year that it would create future generations of Palestinians uninterested in peace who would perpetuate a culture of violence.

It is not difficult to prove that critics of the Palestinians were correct. There remains no peace movement among Palestinians, no indication that any leader has the will or ability to negotiate any compromise (let alone the mythical two-state solution), and no desire to give up terrorism as the means to liberate Palestine from the river to the sea.

Consider this historical footnote. In 2006, Avi Issacharoff wrote for Haaretz from Gaza about how nearly every Palestinian child aged 6 and up received a toy gun as a gift during Ramadan. Some resembled the Israeli Uzi (complete with mock laser site and a cartridge full of plastic bullets), and others the terrorist weapon of choice, the Kalashnikov assault rifle.

In their version of the now politically incorrect American children’s game of “Cowboys and Indians,” Palestinian kids play-act fighting with Israelis. It’s actually an inversion of the American conception when you think about it. The Palestinians consider themselves the good guys (America’s cowboys) and the Israelis the bad guys (Indians in the American game). In their propaganda, however, the Palestinians portray themselves as good “Indians” (the “indigenous people”) and the Israelis as bad “cowboys” (the colonists). While American kids were acting out what they saw on TV and in the movies recognizing that was make-believe, Palestinians are being groomed to be real killers like the “martyrs” they see celebrated in their schools and on TV.

How strong is the indoctrination?

Issacharoff said a Palestinian journalist was reluctant to buy his 10-year-old son a toy gun for Ramadan but gave the child money to buy what he wanted. He chose a model M-16 rifle. The father told Issacharoff, “[I]n another 20 years, you will find here a generation that know nothing but war.” 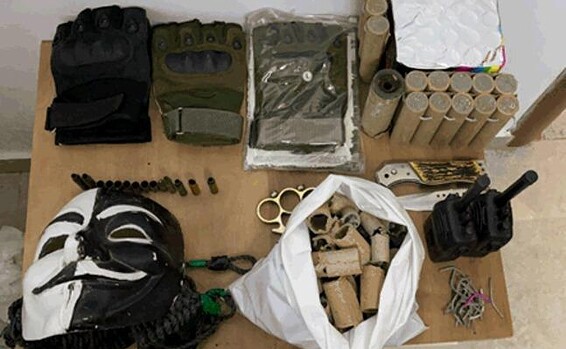 Some of the weapons found in the possession of West Bank Palestinian minors reportedly recruited by Hamas to carry out terror attacks in Israel. Credit: Israel Security Agency.

It didn’t take a generation. Do the math. Those children ages 6 to 10 in 2006 are now in their 20s. How many are now members of Hamas and Palestinian Islamic Jihad?

I ran across some other interesting facts from that time period. The world, aided by inaccurate media reporting, has been in a lather over the number of civilians Israel allegedly killed in “Operation Guardian of the Walls.” As I wrote last week, every civilian death is a tragedy, but there is no such thing as an antiseptic war where no one dies. The more time passes and additional information comes out, however, the more we are learning just how phony the Hamas Health Ministry claims were about the number of civilian casualties.

The U.N. Office for the Coordination of Humanitarian Affairs (OCHA) reported 128 civilians were killed in the recent conflict, not 248 as claimed by Hamas. The same office released information about the Palestinian civil war that followed Israel’s evacuation from Gaza. Instead of taking advantage of the end of the “occupation” to build the infrastructure of a state, Palestinians turned on each other. In just the first two months of 2007, 86 Palestinians, including 11 children, were killed “due to internal violence.”

OCHA said most Gazans were too frightened to leave their houses; masked militants set up checkpoints to check residents’ papers. OCHA said that 3,000 books were destroyed in the Islamic University in Gaza City library and that Al Quds Open University offices were damaged in arson attacks.

And does this sound familiar?

OCHA said, “The violence is also increasing pressure on the supplies of essential medicines and consumables.”

In just one week of fighting between Fatah and Hamas in Gaza in June 2007, The Jerusalem Post’s Khaled Abut Toameh reported that “at least 160 Palestinians were killed and 796 wounded.” That’s more than died in 11 days of fighting and more than 1,500 Israeli airstrikes in May 2021.

Even before that bloody week, a Palestinian human-rights group issued a report that said an estimated 616 Palestinians were killed in factional fighting since Hamas defeated Fatah in the last election held in the Palestinian Authority in 2006. This is more than double the phony number Hamas put out about casualties caused by Israel after the Gaza conflict.

This is the Palestinian version of democracy and what can be expected of a Palestinian state. The probability of a similar outcome undoubtedly played a role in convincing Mahmoud Abbas to cancel the elections he scheduled this spring. Also, contrast the post-election reaction in the P.A. to what happened after Israel formed its government. There was plenty of harsh rhetoric, but the factions did not start killing each other.

I used to believe that when the founding generation of the PLO died, a new generation that grew up in “Palestine” and was not committed to Cold War-era, anti-Western Communist dogma and fantasies about a state from the river to the sea would emerge. Instead of revolutionary prattle, they would see—having lived under Israeli rule—that the best interests of their people required making compromises and agreeing to live in peace with their Israeli neighbors. Alas, the old guard must have anticipated such a possibility and devoted their lives to ensuring their successors would remain loyal to their delusions.

The current generation is lost. The only remote hope is that the international community and, more important, the Palestinians themselves, recognize the need to create an educational system and social environment that promotes tolerance rather than hate, statesmanship rather than terrorism, and peace rather than martyrdom.