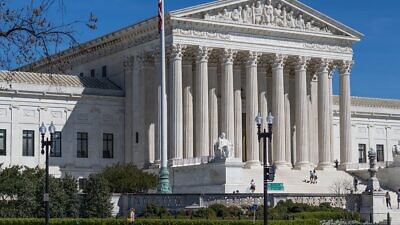 news
‘Day of Rage’ replaces Al-Quds Day as Toronto’s primary anti-Israel, anti-Jewish hate fest
TheJ.ca
Black allies of the pro-Palestinian camp spoke of how “the black and Palestinian struggles for freedom stand together against structural racism.”
news‘Day of Rage’ protesters in Boston chant anti-Israel, pro-Hamas slogans, call for intifada
Jackson Richman
“This wasn’t about changing American police policies, but about coarsening and brutalizing the discourse around Israel and Jews through the exploitation of black suffering,” said Dexter Van Zile, an analyst at CAMERA.
newsAnti-Semitic, anti-Israel groups to hold ‘Day of Rage’ rallies in US, worldwide
Jackson Richman
The demonstrations are being organized by groups such as Al-Awda, American Muslims for Palestine and Jewish Voice for Peace.
Scroll to view more
Republish this article
356 WORDS
Spread the word.
Help JNS grow!
Share now:

(May 28, 2020 / JNS) My colleague, Nave Dromi, disagrees with my negative view of Israel’s annexing some parts of the West Bank.

My six-part argument, as spelled out here, boils down to dismissing annexation as too-expensive symbolism. It brings no rewards but creates problems everywhere one looks. Therefore, I conclude, annexation obstructs her and my goal of an Israel Victory and Palestinian defeat.

Nave’s six-part argument, as presented here, holds that annexation advances that same goal: It puts territorial pressure on Palestinians. It guarantees security to all. It gives Israel the initiative. It seizes the moment. It has President Donald Trump’s reliable backing. It enjoys wide support within Israel.

I accept most of these points, other than two: those about guaranteeing security (nothing on the ground changes) and about Trump (his volatile views cannot be predicted). But, for the sake of argument, I’ll even grant the one about Trump.

Even so, annexation’s benefits remain symbolic while the potential impact is entirely negative. The West Bank and its Jewish towns become yet more contentious. Palestinians may explode. International outrage—from the U.S. Democratic Party to Israeli leftists to Arab governments—costs Israel. Israel gains additional Muslim citizens who reject its very existence.

In all, it boosts the Palestinians’ cause against Israel … in return for roughly nothing.

Nave compares this moment to Israeli founding father and first prime minister David Ben-Gurion’s leading the drive to declare Israel’s independence in 1948. Not so: Declaring independence was not a hollow legalistic gesture like this, but an epochal event—one that, by the way, had the endorsement by the United Nations, and the backing of the Soviet and U.S. governments. The comparison does not hold.

But turn it around: Ben-Gurion was a seasoned and canny political operator who, despite grave reservations, took practical steps such as accepting the U.N. partition plan of 1947. What if he were now Israel’s prime minister? He would reject paying a probably massive price for self-indulgent symbolism. He would say no to annexing any part of the West Bank.