We didn’t need the publication of a new book filled with behind-the-scenes gossip to know that Donald Trump is an unconventional and, at times, inappropriate president. His use of Twitter provides many examples of this fact.

But amid another flurry of questionable tweets on Jan. 4, Trump also talked about threatening aid cuts to the Palestinian Authority (PA). Most of the mainstream media treated that idea as being as loopy as the latest exchange of insults with North Korea’s dictator. But while it’s easy to mock Trump’s social media habits, this one made sense and showed that, not for the first time, the president’s instinctual distrust of experts and the foreign policy establishment may have served him well. 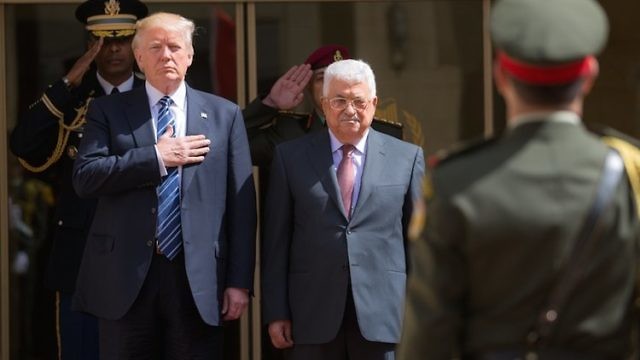 The minuscule amount of the national budget that goes to foreign nations generally serves American interests. In the case of Israel, which is the largest recipient, almost all of the money it gets is spent in the U.S. It’s also part of a strategic alliance in which America receives a great deal back in terms of intelligence and technology.

But not all foreign aid serves U.S. interests. The money sent to the Palestinians illustrates this painfully obvious conclusion. Yet despite the abundant proof that keeping it flowing is counterproductive, the so-called experts seeking to restrain Trump can’t seem to grasp this fact.

Aid to the PA is seen as necessary to prop up the only available interlocutor for peace with Israel. We’re also told that funding the PA is a necessary part of its security cooperation with Israel.

There are elements of truth to these assertions. If the PA were to collapse, that would likely lead to Israel having to reassert direct control of the West Bank rather than the current situation in which the overwhelming majority of Palestinians are governed by the corrupt Fatah party led by PA leader Mahmoud Abbas. But the PA’s need for cash to prop up its kleptocracy is exactly why the U.S. should be using its financial leverage to make it clear to Abbas that a quarter century of his organization holding the U.S. hostage in this manner can’t continue. Abbas’s threats of dissolving the PA are bluffs that should have been called long ago.

The same is true of security cooperation. Abbas relies on Israel to ensure his survival against the plots of his Islamist rivals as much, if not more, than the Israelis rely on the PA to help keep terror under control in the West Bank.

The PA also uses the hundreds of millions of dollars it gets from the U.S. to provide salaries and pensions to terrorists and their families. Congressional efforts to hinge U.S. aid to ending the PA’s subsidies via the Taylor Force Act deserve the president’s support.

The same is true about the massive American contributions to UNRWA, the United Nations refugee agency that is solely devoted to the Palestinians. While UNRWA is credited with feeding and educating Palestinians, its main role is in maintaining the Arab refugees as a stateless people to perpetuate an ongoing threat to Israel’s existence. An equal number of Jews were forced to flee their homes in Arab and Muslim countries after 1948, but they were absorbed in Israel and the West. Yet UNRWA has been part of the effort to prevent Palestinian Arabs from being absorbed elsewhere, thereby allowing them to cling to their dream of destroying the Jewish state.

UNRWA’s schools have courses and books that promote hatred of Israel and Jews. Just as outrageous is the fact that UNRWA employees are often involved with Palestinian terror organizations, and its schools and other facilities have been used to store Hamas weapons where they would presumably be safe from Israeli retaliation.

American governments have tolerated this situation because they felt there was no alternative. But whether or not it is because he isn’t so versed in policy, and therefore is not burdened with the conventional wisdom that has made destructive programs seem reasonable, Trump appears to be unwilling to keep throwing good money after bad.

You don’t have to be supporter of Trump or Prime Minister Benjamin Netanyahu’s government to understand that he is right to demand that if the Palestinians want U.S. money they must, at the very least, come back to the negotiating table and cease funding and fomenting terror.

It isn’t so much a case of “America First” to demand that recipients of U.S. largesse cooperate with U.S. policy, as it is one of common sense. Whatever his other faults, Trump’s insistence on this is neither foolish nor proof of his being unfit for office.