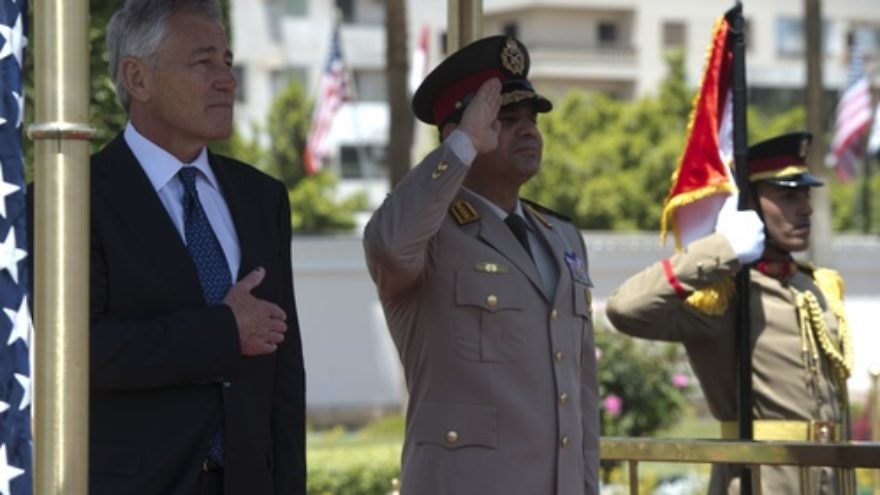 (May 23, 2014 / JNS) Since the 2011 revolution that ousted longtime Egyptian president Hosni Mubarak, the Arab world’s most populous country has faced an uncertain future. Briefly ruled by the long-repressed Islamist Muslim Brotherhood, Egypt was retaken by its dominant military after widespread dissatisfaction with the rule of president Mohamed Morsi, a Brotherhood member.

Hailed as a hero in Egypt for his role in Morsi’s ouster, former defense minister and military commander Abdel Fattah El-Sisi easily won the country’s presidential election with more than 90 percent of the vote, according to results revealed Thursday. But despite the popular support, El-Sisi will preside over a diminished Egypt that is beset by religious persecution, economic malaise, and ongoing security threats from Islamic terrorists.

El-Sisi has promised Egypt a better future, but will he be able to deliver?

“I believe El-Sisi is sincere, but I don’t really know whether he will accomplish what he promises. The country has mounting problems in every aspect,” Halim Meawad—the Egyptian-born co-founder of Coptic Solidarity, a U.S.-based international Coptic Christian human rights organization—told JNS.org.

According to the Pew Research Center, a strong majority of Egyptians share in Meawad’s pessimism of the direction in which their country is headed. Overall, 72 percent of Egyptians are dissatisfied with their country’s direction, which is ironically on par with pre-revolution levels of dissatisfaction.

El-Sisi still garners favorable ratings from his people, with 54 percent of Egyptians supporting him. Nevertheless, the numbers from Pew indicate that El-Sisi is actually much less popular than how he is portrayed by the Egyptian media and his supporters.

Some have commented on a growing “cult of personality” being formed around El-Sisi on the streets of Egypt, with the sale of El-Sisi-themed merchandise such as t-shirts, jewelry, perfume, chocolates, and even sandwiches proudly sporting the image or name of the former military leader.

“He became popular in part because people can read anything they wish into him; he also represents one of the few functioning institutions in Egypt—the army—and it is a structure that promises order and security, which the country lacks,” Dr. Nathan Brown, professor of political science and international affairs at George Washington University (GW), told JNS.org.

Little is known about what an Egypt led by El-Sisi would look like.

“It is unclear what his program is. He has been very vague. It is not even clear who his key advisors are. He has communicated patriotism, a paternalistic sense of responsibility, and an insistence that Egyptians work harder and protest less,” Brown said.

One thing that is clear, however, is that the crackdown on the Muslim Brotherhood will continue. In a pre-election interview aired on Egyptian satellite television networks, El-Sisi said the 90-year-old Islamist movement would be “finished” under his watch.

After briefly dominating Egypt’s parliament and controlling the presidency, the Muslim Brotherhood has seen its fortunes decline precipitously since Morsi was ousted in July 2013.

Since then, Morsi as well as dozens of other top Muslim Brotherhood leaders have been arrested and are awaiting trial on charges of inciting violence and supporting foreign terrorist organizations, such as Hamas.

In an unprecedented move in March, an Egyptian judge sentenced an additional 529 Muslim Brotherhood supporters to death for the killing of a police officer during pro-Brotherhood protests in August 2013.

These moves are part of a larger crackdown that has seen more than 3,000 Egyptians killed and 17,000 Egyptians arrested since July 2013, according to the Carnegie Endowment for International Peace.

While the Muslim Brotherhood remains defiant, still calling for Morsi to be restored as president and for El-Sisi to be executed as a traitor, it has clearly been dealt a serious blow.

“The Muslim Brotherhood is formally banned and treated as a terrorist organization. Tens of thousands of supporters have been arrested. It can still organize some demonstrations, but it may have lost some of its discipline and coherence,” Brown told JNS.org.

At the same time, nearly 300 Egyptians have been killed in terrorist attacks since last July, including hundreds of police officers and soldiers, with many of the attacks coming at the hands of al-Qaeda-affiliated groups and others in the lawless Sinai Peninsula.

For Egypt’s Coptic Christian minority, which makes up about 10 percent of the country’s population of 80 million, this wave of Islamist violence has been deeply troubling, and many Copts welcome the security El-Sisi promises to bring.

“El-Sisi is a hero in [the Copts’] eyes as he risked his own life and successfully removed the Brotherhood nightmare,” Coptic Solidarity’s Meawad told JNS.org.

In a wave of violence last August, the Muslim Brotherhood and its supporters attacked more than 200 churches, Christian businesses, and private homes, leaving at least seven Christians killed and hundreds injured.

Egyptian Christians have also faced an increase in kidnappings, either for ransom or forced conversion to Islam.

“In only one province (El-Minia), its Coptic bishop recently revealed that between June 30 and the present time, he recorded 90 kidnap cases of Copts, some of whom have been killed even after their families paid the demanded ransom,” Meawad said.

At the same time, Egypt’s controversial “blasphemy law” has disproportionately targeted Christians. According to the U.S. State Department, nearly 40 percent of the defendants in blasphemy cases are Christians, despite constituting about only 10 percent of the population.

Yet Meawad said he is “cautiously optimistic” that El-Sisi will follow through on promises to restore and protect Egypt’s beleaguered Christian community.

“El-Sisi is promising equality of all citizens and promised that all 80 churches destroyed or damaged by the Brotherhood will be repaired or reconstructed by, and at the cost of, the Armed Forces,” he said. “The process is very slow and, to date, about 10 churches have been worked on, which still is a good sign.”

Meanwhile, the upheaval of the past few years has strained Egypt’s relations with the U.S.

“The U.S. is split. There are parts of the U.S. government (such as the military) that have good working relationships with their Egyptian counterparts. There are others that are very worried about the political trajectory in the country and convinced that El-Sisi is leading it in the wrong direction,” GW’s Brown said.

For Egypt’s neighbor Israel, security and stability are the top concerns. In pre-election statements, El-Sisi said he would honor the 1979 Israeli-Egyptian peace treaty as president.

“I respect all international accords, including the treaty with Israel,” he said.

Israel and Egypt have a shared interest in cracking down on Islamic terror groups in the Sinai and in targeting the Palestinian terrorist group Hamas, which is an offshoot of the Muslim Brotherhood.

“Abdel Fattah El-Sisi is Egypt’s strong man right now and has been fighting against radical Islam and against the Muslim Brothers. This is very positive both for Egypt, but also for Israel and the entire Middle East,” former Israeli Ambassador to Egypt Zvi Mazel told JNS.org in January.

“We shouldn’t go out on the roofs and cry out in favor of El-Sisi. But what is going on in Egypt is positive for Israel, and you cannot deny it,” he added.

Meawad explained that it might be the way in which Egyptian society tends to glorify its leaders, rather than policy choices, that leads an El-Sisi presidency down the wrong path.

“The ‘individual cult’ is still very strong in the Egyptian culture and gives the ruling regimes a sense of immunity against any accountability,” Meawad said. “I consider this mentality of the masses as responsible, in the first place, for corrupting the past totalitarian regimes.”