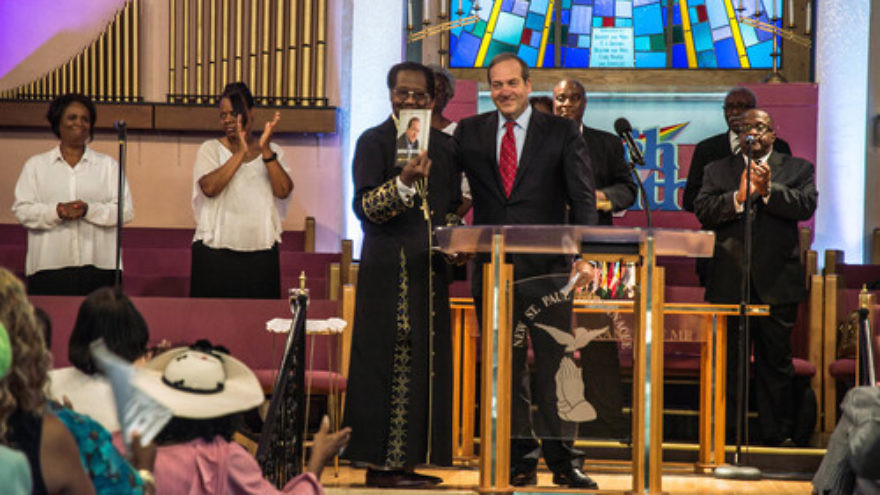 Black History Month is marked annually in February, but reaching out to the African-American community and other minority populations has become a year-round endeavor for pro-Israel and interfaith-minded organizations.

Over the course of the last year, there have been a rising number of delegations of black Christians, particularly clergy members, making pilgrimages to Israel. These groups are increasingly coming from traditional black churches in America. More than 20 high-ranking ministers from the Church of God in Christ (COGIC)—the largest black Pentecostal denomination and fourth-largest Protestant group in America, with 12,000 member churches—made headlines when they went on the first COGIC-affiliated trip to Israel in August 2015. The tour was led by Rabbi Yechiel Eckstein, founder and president of the International Fellowship of Christians and Jews (The Fellowship).

“The pastors reminded us that the Jewish people and the State of Israel do not stand alone. Today, we envision a new era in bridge building between the African-American Christian community, Israel, and the Jewish people,” Eckstein said at the time.

Pastors from other well-known denominations and groups from the black community that have already visited Israel, or are expected to visit soon, include the Progressive National Baptist Convention, the Global United Fellowship, and other historically black congregations.

In a show of solidarity with the Israeli government, a group of prominent black clergy members last year publicly denounced the decision by the Congressional Black Caucus to boycott Prime Minister Benjamin Netanyahu’s address to Congress about the Iranian nuclear threat.

While the incident ostensibly involved political disagreement rather than a racial dispute–over former House Speaker John Boehner’s not having consulted President Barack Obama before inviting Netanyahu–the public discourse about the prime minister’s speech took on racial overtones, in part because of the Black Caucus’s decision to boycott the speech. At a press conference organized by Star Parker, president of the Center for Urban Renewal and Education think tank, the black clergy members made clear that the Black Caucus does not represent all black Christians and that they stand with Israel.

Other organizations such as Christians United for Israel (CUFI) have been working behind the scenes for the past five years in outreach to the black community. They host programs in black churches to motivate black Christians to support Israel and have taken dozens of clergy on tours to the Holy Land. In fact, CUFI started such efforts with an African-American outreach coordinator, Pastor Michael Stevens of Charlotte, N.C., and has since expanded outreach efforts to other minority sectors.

“It has never been CUFI’s intention to focus on only one denomination of black Christians,” Pastor Dumisani Washington, CUFI’s diversity outreach coordinator, told JNS.org.

“Our African-American members are COGIC, Baptist, Pentecostal, non-denominational, and more,” said Washington, who is also the director of the Institute for Black Solidarity with Israel. “Our former African-American outreach coordinator, Dr. Michael Stevens, is a member of the COGIC and did a great job bringing CUFI’s message to his colleagues. We have sought to continue Dr. Stevens’s efforts, while reaching out to all Christians regardless of affiliation or ethnic background. This is why our diversity outreach team includes African, Asian, Hispanic, and [soon] Native American coordinators.”

“Black Christians tend to be pro-Israel, if only in the biblical and spiritual sense. In-depth knowledge about modern-day Israel or Middle East politics is not common in the black church,” just like it is not common in most churches, Washington said.

Many point to the Zionist beliefs of Dr. Martin Luther King, Jr. the basis for why black Christians should support Israel, typically quoting King’s speech at the annual convention of the Rabbinical Assembly in 1968—10 days before he was killed.

King affirmed that historically, there was little anti-Semitism in the black community, although he also acknowledged Jewish-black tensions in northern U.S. communities, such as between Jewish landowners and black tenants.

Despite efforts by some groups in the black community to argue that King would today espouse a more pro-Palestinian position, King was staunchly pro-Israel and had very close friendships with Jewish leaders, who worked tirelessly with him to fight against civil rights injustices. Rabbi Abraham Joshua Heschel is famously pictured near King during the 1965 civil rights march from Selma to Montgomery in Alabama.

Even former Black Panther leader Eldridge Cleaver ended up defending Zionism, in response to the United Nations resolution of 1975 (which was later revoked in 1991) that defined Zionism as racism. On that issue, Cleaver referred to his associations with Arab families in Algeria that still owned slaves, and how he held sympathy for Palestinians but would not support “repugnant” resolutions.

“The Jews have not only suffered particularly from racist persecution, they have done more than any other people to expose and condemn racism,” Cleaver wrote from a jail cell in 1976. “Generations of Jewish social scientists and scholars have labored long and hard in every field of knowledge, from anthropology to psychology, to lay bare and refute all claims of racial inferiority and superiority. To condemn the Jewish survival doctrine of Zionism as racism is a travesty upon the truth.”

Today, it is clear why pro-Israel organizations spend millions of dollars reaching out to minority groups like the black community in order to educate them about the Israeli-Palestinian conflict.

“Recently, I’ve seen increasing efforts from anti-Israel organizations to court members of minority communities to support the pro-Palestinian narrative,” CUFI’s national campus coordinator, David Walker, told JNS.org. “These organizations prey on the ignorance [regarding the Israeli-Palestinian conflict] of the minority communities by offering one side of the story that often showcases Israel dishonestly, and thus in the poorest light. Supporters of BDS (the Boycott, Divestment and Sanctions movement) try to export the anti-Israel reasoning to minority associations by appropriating the successful struggle against real apartheid in South Africa.”

Asked whether he sees a significant rise in the black community’s support for Israel, CUFI’s Washington cited media bias as a rallying point.

“Over the past year, I have had multiple black pastors request more information about how their congregations can stand with Israel,” he said. “This is due in large part to the unfair treatment Israel receives in the media, and a desire to do something to help.”