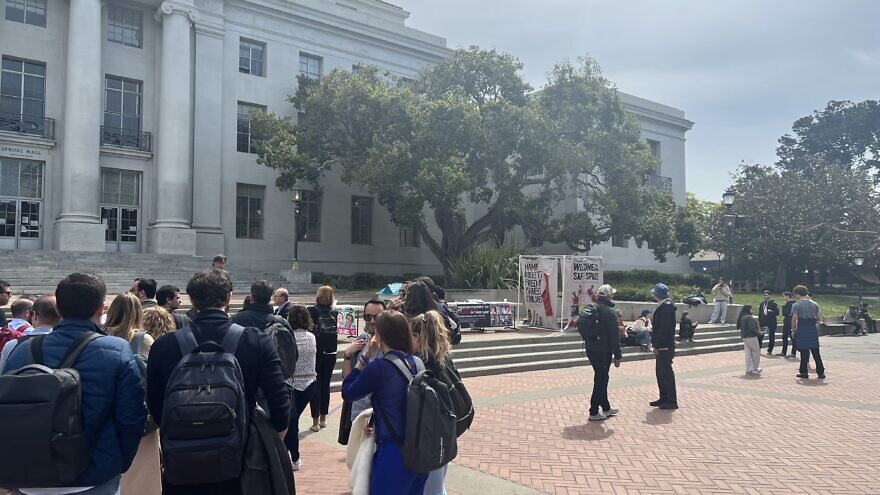 (April 6, 2022 / JNS) A pro-Israel student group is going on the offensive by tabling at multiple campuses across the United States, highlighting systemic discrimination against Jews in Palestinian-controlled territories such as the West Bank and Gaza Strip for the first time ever in what the group is calling Palestinian Apartheid Week.

Issues like salaries paid to the families of Palestinian terrorists for killing Jews as part of a policy called “pay for slay”; the Palestinian Authority making it illegal to sell property to Jews; Jews not being able to openly pray at holy sites in the Palestinian territory unless accompanied by security; erasing the existence of Jews from Palestinian textbooks and maps; as well as Hamas’s charter calling for the killing of all Jews.

“Those policies—if someone wants to discuss true apartheid and discrimination and separation from people—this is it,” said Ilan Sinelnikov, president and founder of SSI. “This is maybe not even true apartheid because nothing is the same as South Africa, but this is the closest that can possibly be that shows signs of apartheid like that.”

The first week of the campaign coincided with Israel Apartheid Week. 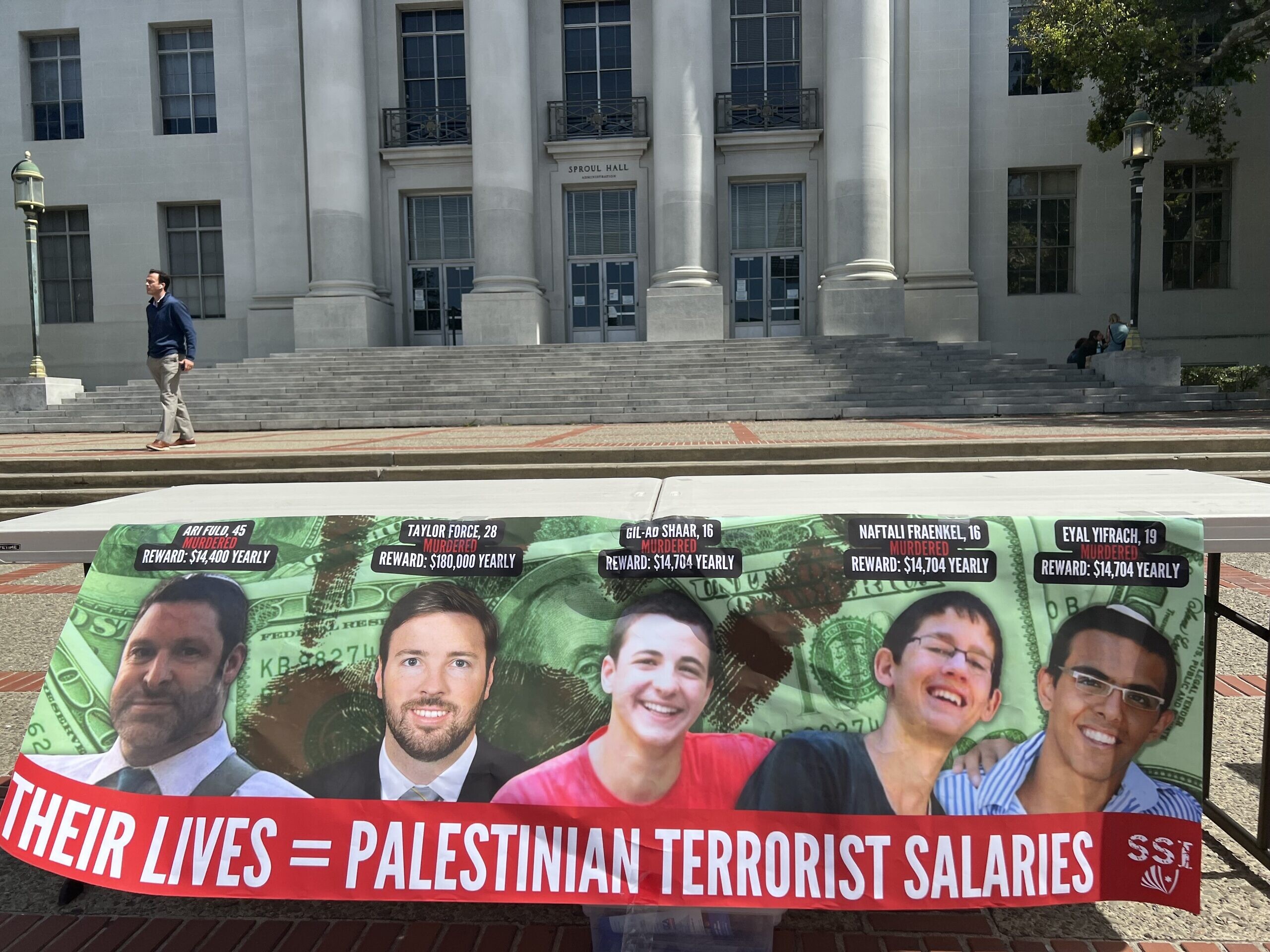 Issues like salaries paid to the families of Palestinian terrorists for killing Jews as part of a policy called “pay for slay” were on display. Credit: Courtesy.

Sinelnikov said that for 10 years, Jewish students at college campuses across North America had been put on the defensive every year during a week when Student for Justice In Palestine (SJP) demonstrate at college campuses around the world to accuse Israel of war crimes and apartheid. One commonly used gimmick for Israel Apartheid Week is to put up a large wall, modeled after the Israeli West Bank barrier, decorated in anti-Israel messages.

From the perspective of Jewish and Zionist students who walk past that wall on campus, with its messages and students spreading misinformation, it “makes you feel horrible, makes you feel you have nothing to respond to it,” he said.

Organizations often respond to it by hosting pro-Israel speakers at events that are usually indoors or by passing out fliers, which don’t get nearly the same amount of attention.

“We want to move from defense to offense. We want to be the organization that controls the narrative and controls the conversation,” said Sinelnikov.

‘Let’s discuss them for once’

They set up in high-traffic areas, such as in front of student unions or, as at UC Berkeley, in a staircase by the entrance with multiple tables featuring different banners. Some of the banners include portraits of victims of Palestinian terrorists in Israel, such as Taylor Force, a 28-year-old American graduate student; Ari Fuld, a 45-year-old father of four; and three teenage boys kidnapped in June 2014. The signs also included the amounts the P.A. pays their families each year. 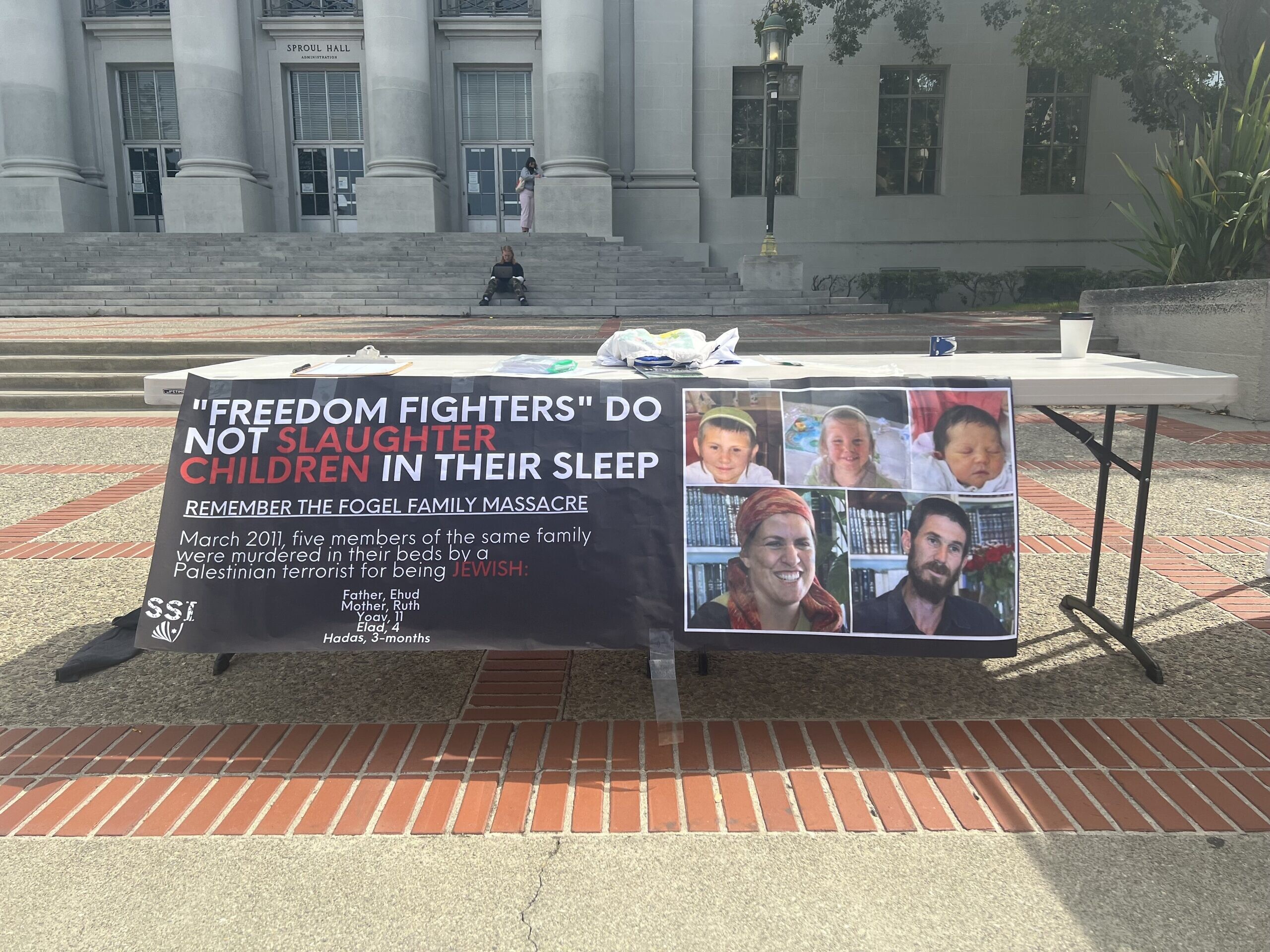 Some of the banners include portraits of victims of Palestinian terrorists in Israel such as the Fogel family. Credit: Courtesy.

Other banners include a quote from Hamas’s charter or anti-Semitic statements from Palestinian leader Mahmoud Abbas.

Nearby, the group put up an improvised tent made to look like a bomb shelter they called a “Safe Space” and painted on it the many threats faced by Israelis from Palestinian terrorist attacks. They also erected a plastic children’s playhouse. On the house there is a “For Sale” sign, stating that under Palestinian law, selling a house to a Jew is considered high treason, punishable by either a life sentence or death.

Nowhere in the display are there any Israeli flags or pro-Israel messages or T-shirts from their organization. This is done so that the event focused only on Palestinian policies, rather than always bringing the issue back to Israel.

Throughout the approximately five hours a day the tables are set up on campus, except for at the University of Minnesota, where the cold only allowed them to stay for a couple hours a day, Sinelnikov said that he could see the effect the campaign is making.

The people who he could tell were really anti-Israel didn’t know how to react. Some said it wasn’t true; a few yelled obscenities or flipped them off. At every university, members of the school’s SJP would stand across from them and take photos, but rarely say anything because they didn’t know what to do.

Even at Berkeley, nothing crazy happened, as some people would have predicted, he said. 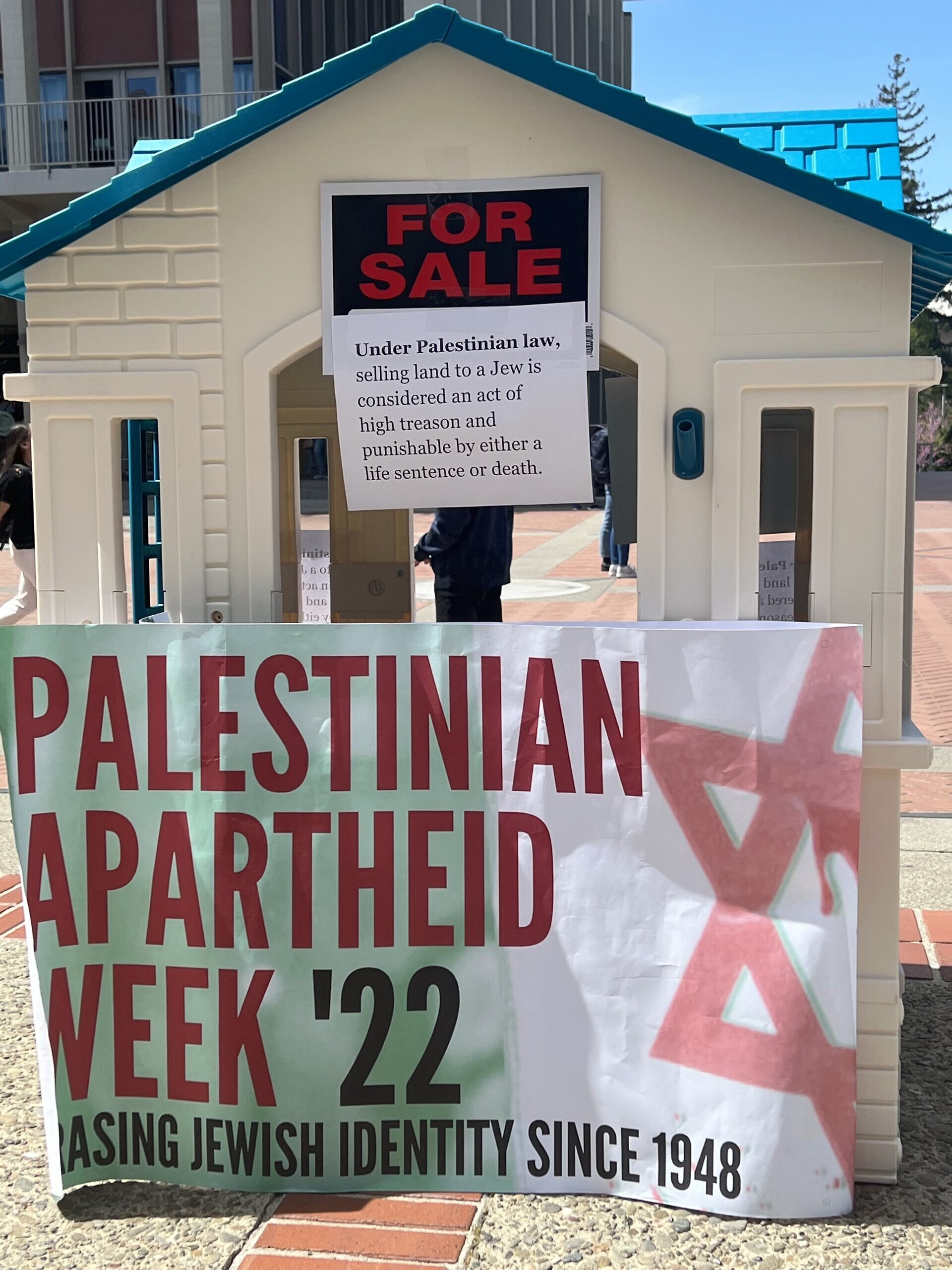 SSI also erected a plastic children’s playhouse. On the house there is a “For Sale” sign, stating that under Palestinian law, selling a house to a Jew is considered high treason, punishable by either a life sentence or death. Credit: Courtesy.

“Most people think it’s going to burn the campus down—this campaign—but the fact of the matter is, I think we’re educating people really nicely in a really good way, and we’re controlling the narrative in the conversation,” he said after the group’s first day at UC Berkeley, one of the country’s most activist left-wing universities.

Meanwhile, he could also see a change in Jewish and pro-Israel students who were coming up to them the whole day, happy and proud to see that for the first time there was a group that was proactive against Palestinian disinformation on campus.

“Their feeling has changed, and now the Jewish students and the Zionist students in Berkeley and Urbana-Champaign feel empowered and like we’re controlling the narrative and the students that are strongly anti-Israel, they’re the ones that need to respond to us,” said Sinelnikov.

The only thing that happened during the trip so far that shocked Sinelnikov took place at Urbana-Champaign. A young Palestinian student came up to them and argued for a while. At first, he said, it appeared that they had even found common ground. Then, her friends from SJP who were watching the event the entire day and taking pictures came up to her and said something in Arabic. The student then broke down, and started crying and screaming at SSI and the Jewish students at the tables, saying, “You stole our lands, we have nothing to lose, and we will fight you until the day we can’t.”

According to Sinelnikov, the group plans to appear at other universities every semester, though they have not yet decided which ones they will visit in the fall. The goal is to build Palestinian Apartheid Week to the point where individual campus SSI or similar pro-Israel groups can host their own Palestinian Apartheid Weeks in the future without the help of the national team.

“Quite literally erasing the Jewish existence, lives, community and history from the map of the Middle East is what apartheid looks like,” SSI stated in a news release. “If any college student can justify the Palestinian apartheid policies above, the problem was never Israel, the problem is those who cannot come to terms with the fact that the Jewish people rebuilt their home and have their own independent state. Now is the time to discuss Palestinian apartheid. For too long, the despicable practices of the Palestinian government against Jews have gone unnoticed by the international community. For the first time ever, activists at SSI will be exposing these shameful practices.”