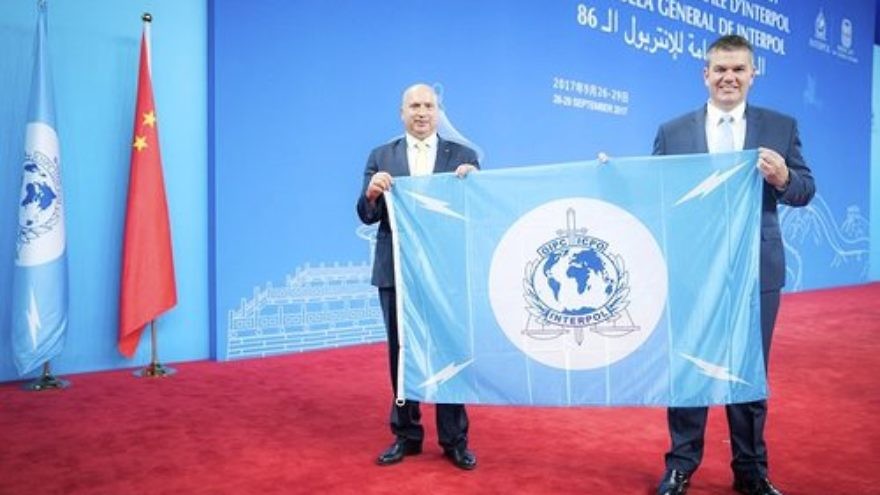 In the absence of peace negotiations, the Palestinian Authority (PA) has sought unilateral recognition of statehood from different entities in recent years. Marking the latest diplomatic setback for Israel on that front, the police agency Interpol—the world’s second-largest international organization after the United Nations—this week voted to accept Palestinian membership.

Israel had campaigned against the move, arguing the PA’s support for terrorism would undermine Interpol’s efforts. The U.S. also opposed Palestinian membership in Interpol and assisted Israel with challenging Ramallah’s bid.

PA Foreign Minister Riyad al-Maliki hailed the vote as a “victory” for Palestinians.

“The State of Palestine considers this membership and the responsibilities that it entails as an integral part of its responsibility towards the Palestinian people and a moral commitment to the citizens of the world,” he said.

Israel has expressed concern that the Palestinians might abuse their membership and use Interpol as a platform for undermining the Jewish state, including demanding the extradition of Israeli officials or pursuing other legal action against them, based on the Palestinian claim that Israel’s settlement enterprise is a “crime.”

Prof. Eugene Kontorovich, head of the international law department at the Kohelet Policy Forum in Jerusalem, said Palestinian acceptance into Interpol will weaken prospects for future peace negotiations with Israel.

“Palestinian membership will only solidify their goal of seeking the trappings of statehood without negotiations and concessions,” he told JNS.org. “It will strengthen their conviction that they can violate agreements like [the] Oslo [Accords] with impunity.”

According to a statement from the Prime Minister’s Office, Netanyahu told Greenblatt “the actions of the Palestinian leadership in recent days severely impairs the chances of achieving peace and added that the Palestinian diplomatic warfare would not go unanswered.”

According to former Israeli Ambassador to Canada Alan Baker—who heads the Institute for Contemporary Affairs at the Jerusalem Center for Public Affairs, as well as the Global Law Forum—Interpol’s vote to admit the Palestinians is “indicative of the total insensitivity of the international community, which out of political correctness and an incomprehensible eagerness to coddle the Palestinian leadership, fails to realize that in so doing they are giving the Palestinians a green light and license to incite and to reward terror.

At the organization’s annual General Assembly that convened this year in Beijing, the Palestinian membership bid was approved with 75 countries voting in favor, 24 voting against and 34 abstaining.

While Interpol does not have any police powers itself, it is an international association of governments with the mission of assisting and coordinating law enforcement across its member states. Based in Lyon, France, with the additions of the Palestinians and the Solomon Islands, France-based Interpol now has 192 member states.

Interpol says its job is to help police forces in different countries work together to solve crimes that cross borders.

“Every member country has their own Interpol office, called a National Central Bureau (NCB), which connects that country’s police force with the other members,” Interpol’s website says. “They share information with each other and have access to a variety of high-tech tools and resources.”

Kontorovich believes the Palestinians could use Interpol for aggressive behavior against Israel, but that ultimately, Palestinian membership will not have any real legal repercussions for the Jewish state.

“They can use it to issue harassing ‘red notices’—arrest requests—which have no binding legal obligation, but will be vexatious and distracting,” he said.

“It is unconscionable that the Palestinian Authority, only a day after a major terrorist attack in Israel, is being rewarded by being welcomed into an organization whose whole raison d’être is to fight international crime and terror,” Dr. Moshe Kantor, president of the European Jewish Congress, said in a statement.

“The Palestinian Authority must meet standardize criteria before even approaching Interpol membership, and at the moment it falls well short in this regard,” he said.

Similarly, the Anti-Defamation League (ADL) called Palestinian acceptance “premature” and said the move hurts chances for an Israeli-Palestinian peace deal. The Interpol vote “must be seen as the latest step in the ongoing Palestinian campaign to seek international recognition as a state outside the context of bilateral negotiations with Israel,” said Sharon Nazarian, ADL’s senior vice president for international affairs.

Kontorovich said unilateral moves will not help the Palestinians attain actual statehood, but at the same time, developments like the Interpol episode illustrate the strategic failure of Israel’s current approach to Palestinian statehood campaigns.

“Israel has to win every time, the Palestinians only need to win once,” he said. “Israel’s diplomatic defeat shows the weakness of its purely reactive, defensive diplomatic posture. Unless it is willing to pursue aggressive strategies that would put the PA government on the defensive, losses like this one are inevitable.”