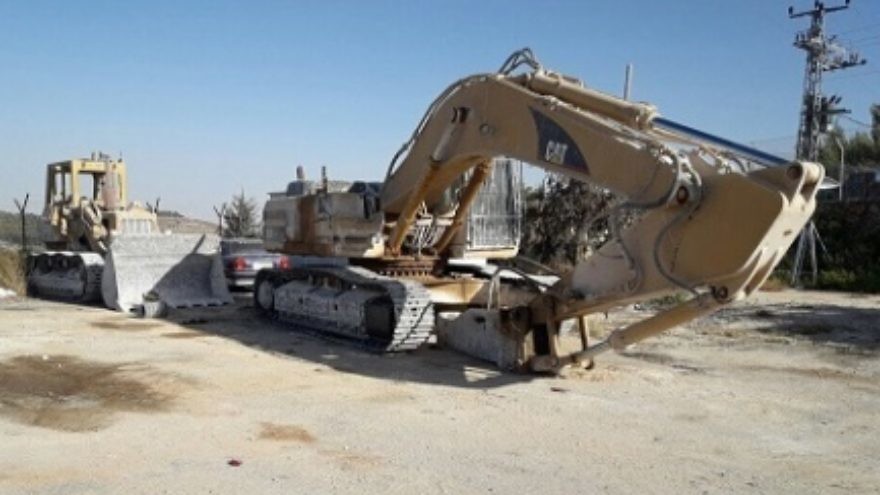 The Israeli authorities last week confiscated two tractors, a hydraulic excavator and other equipment used by Palestinians to carry out illegal quarrying that has been damaging a rare nature reserve in the Judean Desert.

I say “if,” because there’s really not much chance The New York Times or Washington Post would ever cover a story that reflects badly on the Palestinian cause. That would undermine their drive to promote the creation of a Palestinian state.

“The Palestinians have been carrying out quarrying activities in the area for several years, and have significantly increased the quarrying over the past few months, especially in the upper part of Darga ravine, a seasonal stream that runs from the Judean Desert to the Dead Sea,” Israel Hayom reported. “The extensive quarrying has been systematically destroying the ecosystem in the rare nature reserve…”

According to Marco Ben-Shabbat, head of the Israeli Civil Administration’s inspection unit, the Palestinians “simply go from one place to the next in search of places to dig up. It’s unthinkable that a place that has been uninterrupted for 2,000 years was harmed in this way in a matter of a month.” Ben-Shabbat said he “had contacted the Palestinian Authority in an effort to have it prevent the damage to the nature reserve without Israeli intervention, but to no avail.”

All this illegal quarrying also happens to be a blatant violation of the Oslo accords, which forbid any such activity without Israeli consent. But since the news media and the  international community routinely ignore the many other Palestinian violations of the accords, why would they speak up about this one?

Last October, Ha’aretz correspondent Zafrir Rinat revealed that “sewage from West Bank areas administered by the Palestinian Authority has been polluting streams inside Israel for years…Last week the problem led for the first time to a beach being closed in the Netanya area, near the mouth of the Alexander River.”

And the Beit Yannai beach was not the only victim of the sewage from the Nablus-area olive oil factories, according to Rinat: “The Nature Authority says this sewage kills off a lot of animal life, and rehabilitation work done in the area goes down the drain. The authority has warned about this problem multiple times in the past.”

American and European newspapers often quote Ha’aretz when it publishes articles that reflect badly on Israel. They praise Ha’aretz as “The New York Times of Israel” and present it as an authoritative source of information about Israel and the Palestinians. But on the rare occasion when Ha’aretz prints something that reflects badly on the Palestinian Authority, the major U.S. dailies lose interest.

Recall the international news media last year turned a blind eye when the Israeli authorities shut down a charcoal factory in the Palestinian Authority-ruled city of Ya’bad that was causing serious air pollution in the region. Israel repeatedly warned the PA about the problem, but the PA refused to act—even though local Palestinian villages were suffering a disproportionately high rate of respiratory problems because of the smoke from the factory.

The implications of Palestinian pollution are significant for the issue of whether or not to create a Palestinian state. Any attempt by Israel to act against pollution emanating from “Palestine” would constitute a violation of another country’s national sovereignty. The Israelis would be condemned and perhaps even face international sanctions. Toxic smoke would fill Israel’s air and deadly sewage would flow into its rivers, and Israel would be unable to stop it.

That’s why Palestinian advocates in the news media and “peace” groups never talk about the charcoal factory in Ya’bad, or the olive oil factories in Nablus, or the quarrying in the Judean Desert. They know that the dirty little secret of Palestinian environmental destruction would raise serious questions about the cause of Palestinian statehood—questions they would prefer not to answer.
Stephen M. Flatow, an attorney in New Jersey, is the father of Alisa Flatow, who was murdered in a Palestinian terrorist attack in 1995.