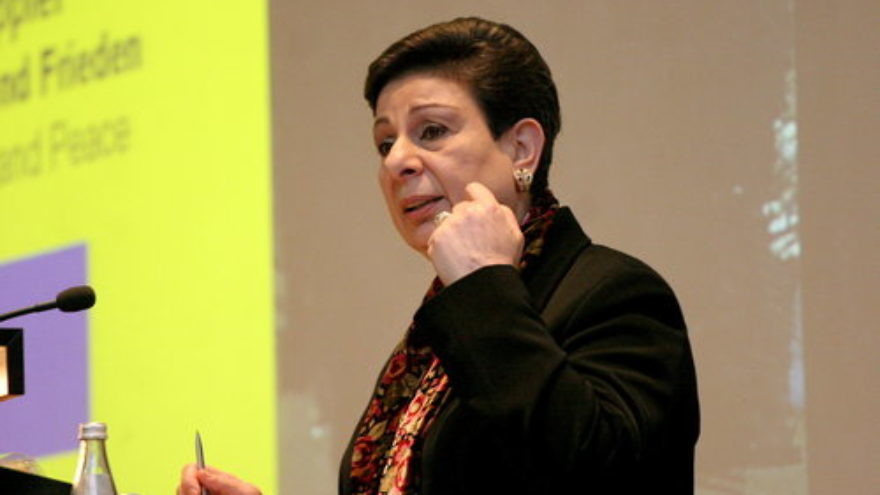 Hanan Ashrawi has served as a spokesperson for the Palestinian Authority and the Palestine Liberation Organization to American audiences for more than two decades. Credit: Carsten Sohn via Wikimedia Commons.
Republish this article
927 WORDS
Spread the word.
Help JNS grow!
Share now:

(January 3, 2017 / JNS) WASHINGTON—A leading Palestinian spokesperson is telling American television audiences that she rejects the concept of Islamic countries—but an investigation by JNS.org has found that the largest donors to the organization she heads are self-described Islamic countries.

The controversy began with a Dec. 27 CNN appearance by Dr. Hanan Ashrawi, who has served as a spokesperson for the Palestinian Authority (PA) and the Palestine Liberation Organization to American audiences for more than two decades.

CNN anchor Don Lemon asked Ashrawi whether the Palestinians are willing “to recognize Israel as a Jewish state.” Ashrawi replied, “If you want to give religion to states, that is against our principles. I don’t recognize Islamic states, Christian states, Jewish states. A state is a state for all its citizens.”

Ashrawi’s statement appears to conflict with the wording of the PA’s own “Constitution of Palestine,” adopted in 2003. Article 4(1) states, “Islam is the official religion in Palestine,” and article 4(2) states, “The principles of Islamic sharia shall be the main source of legislation.”

In response to a request by JNS.org for clarification, Ashrawi responded that Islam was made the official religion of “Palestine” only “for technical reasons—holidays, contractual issues, etc.” She also asserted that the PA constitution “states that Islam is the official religion IN Palestine, which is quite different from saying that Palestine is an Islamic state.” Ashrawi added that while Islamic sharia law is “the main source” of legislation for the PA, it is “not THE source of legislation.”

Ashrawi’s primary public identification is as founder and chairperson of “Miftah: The Palestinian Initiative for the Promotion of Global Dialogue and Democracy,” a Ramallah-based organization that promotes greater civic participation among Palestinians, especially women. Last year, Miftah sponsored a women’s unity conference, at which women representing Hamas, Islamic Jihad and Fatah discussed how to implement the slogan, “One Country, One People, One Flag.”

According to financial documents examined by JNS.org, one of the largest donors to Miftah since 2008 has been the Arab Fund for Economic and Social Development, which is an arm of the Arab League. It gave Miftah $172,276 during 2008-2010 and $173,431 during 2013-2015. The Arab Fund was Miftah’s third-largest donor in 2009, and fourth-largest in 2014. Last year, the Arab Fund pledged an additional $264,446, which was the second-largest pledge after that of the government of Norway.

Twenty-one of the 22 member states of the Arab League declare in their constitutions that Islam is the official religion of their country. The exception is Lebanon, which had a Christian majority when its constitution was adopted in 1926.

Asked by JNS.org how Miftah can accept funds from self-described Islamic states if she rejects the concept of an Islamic state, Ashrawi replied, “If Arab states declare an official religion it doesn’t mean that they set up religious states or exclusive systems.”

Ashrawi added that JNS.org’s questions about her CNN remarks are “missing the real point”—that Israel has a “mentality of absolutist ideology” and “discriminates against the indigenous Palestinians,” who she said have a “narrative, history and culture that have existed for thousands of years in historical Palestine.” That apparently was a reference to the notion that the Palestinian Arabs are descendants of the biblical Canaanites, a claim that is rejected by mainstream archaeologists and anthropologists.

Dexter Van Zile, a media analyst for the Committee for Accuracy in Middle East Reporting in America (CAMERA), told JNS.org he believes Ashrawi is guilty of “hypocrisy” when she “condemns Israel for being a Jewish state while shilling for the establishment of yet another Islamic state.” According to Van Zile, the PA’s track record and the provisions of its constitution ensure that “a future state of Palestine will be another sharia-compliant Islamic state that oppresses non-Muslims, women and would-be reformers.”

As for the Arab League’s funding for Ashrawi’s Miftah organization, Van Zile said that “Miftah’s reliance on funds from Islamic apartheid states reveals the organization’s true nature—it uses the language of development and human rights to delegitimize Israel on behalf of Islamist regimes in the Middle East.”

Van Zile also urged CNN to do a follow-up interview with Ashrawi to ask her about these issues. “CNN has an obligation to challenge Ashrawi about the sources of her funding and its impact on her message,” he said.

Ashrawi has stirred controversy on many previous occasions. In 2012, American Jewish Committee CEO David Harris authored a Huffington Post op-ed titled “Hanan Ashrawi is to Truth What Smoking is to Health.” He wrote that Ashrawi deserved “a gold medal for historical revisionism” for an article she wrote, in Arabic, asserting that Jews were not expelled from Arab countries but actually emigrated voluntarily as part of a Zionist plot.

Miftah has been at the center of controversies over some of the articles on its website. In 2013, the blogger “Elder of Ziyon” reported that Miftah’s Arabic-language website contained an essay asserting that “the Jews used the blood of Christians in the Jewish Passover.” Miftah at first accused the blogger of a “smear attack,” but after two weeks removed the article and apologized in the website’s English edition. Last month, Elder of Ziyon found an article on the Miftah website authored by a neo-Nazi group, National Vanguard, declaring that “Jewish media control” is “poisoning the minds and souls of our children.” The article was subsequently removed.

The watchdog organization NGO Monitor in 2006 criticized Miftah for publishing an article, authored by Miftah staff member Joharah Baker, that praised Palestinian women suicide bombers for “participating in the resistance” by “sacrificing their lives for the cause.”