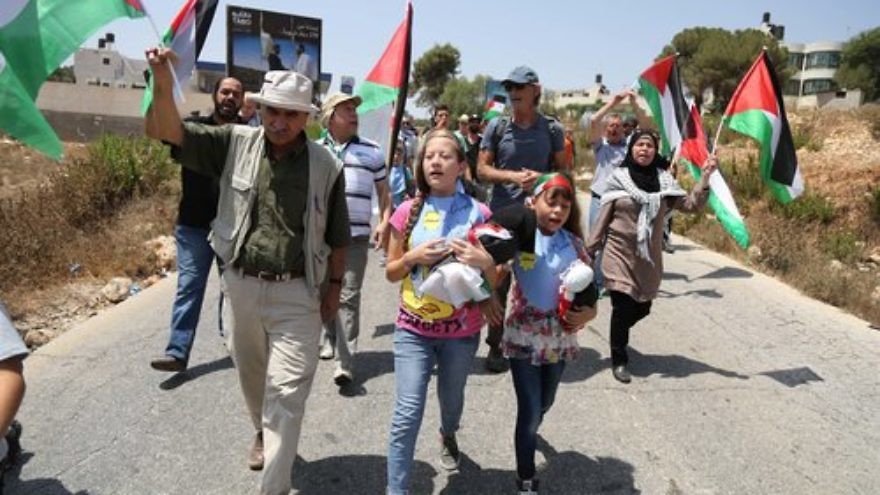 Palestinian demonstrators in Nabi Saleh hold Palestinian Authority flags during a protest against Jewish settlement expansion in August 2015. Nearly every Friday for the past seven-and-a-half years, “Palestinian supermom” Manal Tamimi and her colleagues in Nabi Saleh have marched to the nearby Jewish community of Halamish to demand its expulsion. Credit: Flash90.
Republish this article
1064 WORDS
Spread the word.
Help JNS grow!
Share now:

The United Nations has crowned her a “human rights defender,” while Al Jazeera, the Qatar-based broadcaster, hails her as a “Palestinian supermom.” But Manal Tamimi’s links to violence and tweets accusing Jews of “drinking Palestinian blood” are prompting some of her backers to reconsider their support.

Tamimi, a 45-year-old mother of four, is a leader of the Popular Resistance Organizing Committee in the town of Nabi Saleh, near the Palestinian Authority (PA)-controlled city of Ramallah. Nearly every Friday for the past seven-and-a-half years, Tamimi and her colleagues have marched to the nearby Jewish community of Halamish to demand its expulsion. Halamish is the village where July 21, a Palestinian terrorist stabbed to death three members of the Salomon family at their Shabbat dinner table.

During the Friday protests, many of the marchers have hurled rocks at Israeli soldiers guarding the town, who have responded with tear gas or rubber bullets. Tamimi, her husband Bilal and their children have attracted international attention by posting videos of the soldiers on the internet. The Tamimis contend that the soldiers’ arrests of rock-throwers constitutes persecution of the residents of Nabi Saleh.

Tamimi was included in a list of “human rights defenders” in a recent report by S. Michael Lynk, the U.N. special rapporteur on human rights in the disputed territories.

In response, NGO Monitor, a Jerusalem-based organization that tracks the activities and funding of self-described human rights groups, informed the U.N. Office of the High Commissioner for Human Rights that Tamimi has during the past two years authored tweets such as: “Vampire zionist celebrating their Kebore day [written on Yom Kippur] by drinking Palestinian bloods, yes our blood is pure & delicious but it will kill u at the end.” In another tweet Aug. 1, 2015, she said, “I do hate israel, i do hate zionism, i wish a third Intefada coming soon and people rais up and kills all these zionist settlers everywhere.”

In a Twitter exchange Aug. 20 with NGO Monitor spokesman Daniel Laufer, Tamimi wrote, “I’m not a Jew heater [sic], I have a very good Jew friends, I hate Zionists & I’m not denying that, Zionism, KKK and ISIS R all same 4 me.”

In response to the NGO Monitor complaint, the U.N. agency removed Tamimi from the roster of “human rights defenders” in Lynk’s report.

NGO Monitor President Prof. Gerald Steinberg told JNS.org, “There is no excuse for funding Jew-hatred in the guise of promoting peace or in any other NGO framework, or for giving anti-Semites such as Tamimi the status of ‘human rights defenders.’ Independent examinations of the U.N. and EU agencies involved in this travesty are long overdue—the disconnect between noble objectives and immoral actions has been clear for many years.”

Steinberg added, “Full transparency and oversight for the massive sums [of money] going to radical NGOs is crucial so that this behavior is halted. While some of the European governments, including Switzerland and Denmark, have started to examine funding for political NGOs after parliaments demanded accountability, there is still a long way to go.”

While the U.N. human rights office is distancing itself from Tamimi, Amnesty International has embraced the Tamimis and their cause. Amnesty has declared Nabi Saleh to be a “community-at-risk” and featured it in one of its “Write for Rights” letter-writing campaigns.

“We need to tell the Israeli authorities: enough—you are no longer facing a tiny village on a small hill. You now have the entire Amnesty movement to reckon with,” according to Amnesty researcher Saleh Hijazi, who formerly worked in the PA’s Ministry of Planning.

Edith Garwood, Amnesty International USA’s specialist on Israel, the disputed territories and the PA, has written that the Nabi Saleh demonstrators “face frequent violent repression from the Israeli army just for practicing their human right to peacefully express their opposition” to Israel. Garwood’s essay, which was published in the Huffington Post, did not mention the rock-throwing.

Asked by JNS.org whether Amnesty International is reconsidering its support for Tamimi in view of her anti-Semitism and advocacy of violence, Amnesty spokesperson Amanda Simon responded, “Our position regarding the rights of residents of Nabi Saleh to peacefully protest against Israeli occupation and settlements remains unchanged.” As for whether her phrase “peacefully protest” is meant to include rock-throwing, Simon replied that “even in cases where the protesters have thrown stones…these have posed little or no serious risk” to the Israelis who were targeted. At least 15 Israelis have been killed by Arab rock-throwers since the 1980s.

The Qatar government-funded news agency Al Jazeera featured Tamimi in August in a profile titled “How to be a Palestinian Supermom.” In Tamimi’s view, “to be a Palestinian parent is to be an activist,” the article reported. It noted that she “writes social media posts,” but the article did not mention her tweets advocating violence or denouncing Jews as “vampires.”

Last year, however, Tamimi was denied a visa to enter the U.K. She had been invited to undertake a speaking tour on behalf of the Palestine Solidarity Campaign, including participation in the group’s “Nakba Week” events. (“Nakba,” the Arabic word for “catastrophe,” is the term Palestinians use to refer to the creation of Israel in 1948.)

A spokesperson for the British Home Office told JNS.org, “We do not routinely comment on individual cases,” except to note that “applicants must provide evidence to show they meet the requirements of the immigration rules.” Paragraph 320 of those rules refers to several categories of refusal that might have been applied to Tamimi, including a record of criminal convictions. In 2010, Tamimi was convicted of attacking and spitting on an Israeli policeman.

Tamimi was a guest speaker in July at the “Go Palestine” summer camp for Palestinian teenagers around the world, which was recently reported on by JNS.org.

According to the camp organizers’ account, the teens held an “emotional conversation” with the “amazing” Tamimi in her home July 12. The campers were “deeply inspired” by “the resilience that [Nabi Saleh residents] showed in the face of hardship.”

Tamimi did not respond to requests from JNS.org for comments concerning her activities.