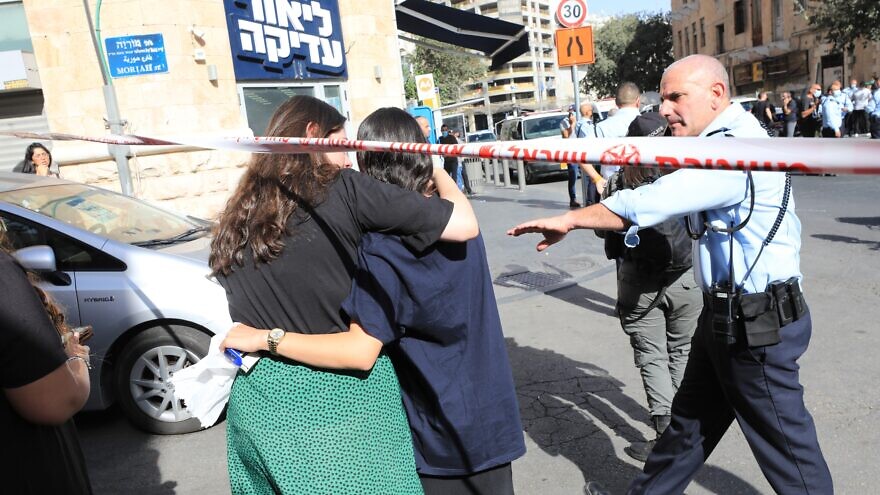 Police and rescue personnel at the scene of a terror attack near the Central Bus Station in Jerusalem. Two Israelis wear moderatly injured in the stabbing attack, and the Palestinian terrorist was shot, Sept. 13, 2021. Photo by Olivier Fitoussi/Flash90.
Spread the word.
Help JNS grow!
Share now:

The attack victims, both yeshivah students, have been evacuated to the hospital. A Border Policewoman shot and critically injured the knife attacker, identified by police as a 17-year-old resident of Hebron.

The attacker’s father has been taken for questioning by the Shin Bet intelligence agency, according to a report by Kan news.

“There is no doubt that an escalation is occurring,” Cmdr. Doron Turgeman, head of the Jerusalem Police District, told Kan.

A Magen David Adom Paramedic recalled arriving at a chaotic scene and finding two injured men fully conscious and suffering from stab wounds. Paramedics treated the stab victims, stopped bleeding and evacuated them to the hospital.

Rabbi Alon Navon, the father of one of the victims, told Ynet that his son had left a yeshivah with a studying partner, passed by a store, and that “a terrorist with a knife pounced on them and stabbed them.”

Navon’s son caught the stabber’s hand and was able to repel him to the floor, he said.

“Thank God, it ended at a relatively low level. I want to thank the Creator of the World,” said the rabbi.