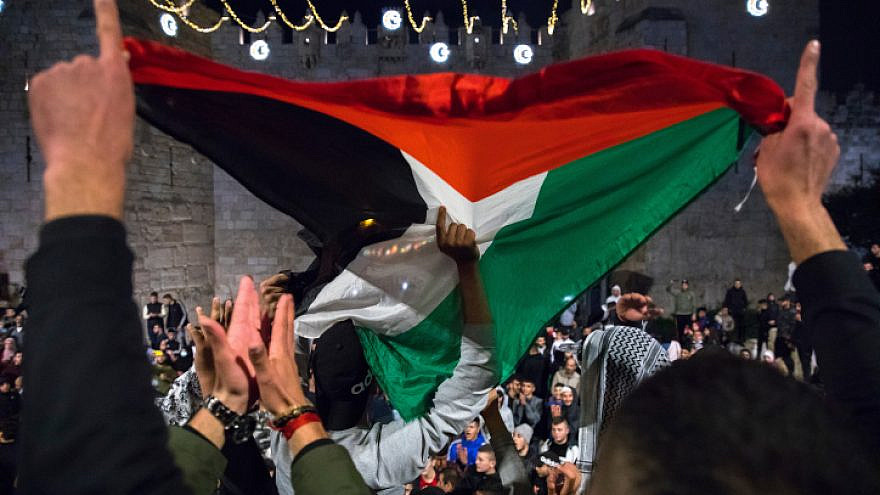 (June 8, 2021 / JNS) Eastern Jerusalem residents are calling for a “victory parade” to be held on Thursday in place of a canceled flag parade that was to have taken place the same day, reported Channel 20. The event’s organizers have called for “hunting the settlers and deterring them,” according to the report.

The procession is to take the intended route of the Jerusalem flag march, which was canceled by the Israel Police on Monday due to security concerns. The flag march originally scheduled for May 10, Jerusalem Day, was delayed by Hamas rocket fire. It was rescheduled for June 10, but police refused to authorize the route, which ran through Damascus Gate and Muslim Quarter.

The victory march organizers also called on eastern Jerusalem Arabs to demonstrate against Israel’s intention to renovate the Mughrabi Gate, the only gate through which non-Muslims are permitted to enter the Temple Mount. The Jews have renamed it “Hillel Gate” as part of an effort to “Judaize” the city, the organizers said, according to the report.

Hours after the Israel Police effectively canceled the flag march, Israeli Prime Minister Benjamin called a meeting of senior security officials to discuss the issue, Ynet reported. It was agreed at the meeting that Israel Police Commissioner Yaakov Shabtai would propose alternate routes for the event.

The cancellation of the June 10 flag march was heavily criticized by right-wing politicians, who accused police of capitulating to terrorists.