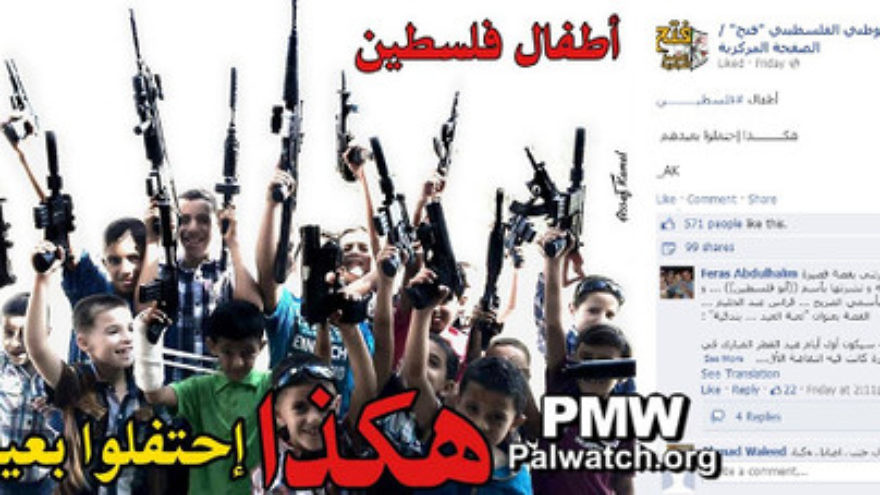 (November 1, 2013 / JNS) The subject of incitement as an impediment to the resolution of the Israeli-Palestinian conflict may finally be getting the attention it deserves. But even now, discussion of the issue glosses over a deeper problem.

Israel has been complaining for years about Palestinian Authority incitement against Israel and against Jews, arguing that it merely inflames old anger, stirs up violence and terror, and foments new hatred in each new generation. Most depressingly, it prevents the population from coming to terms with the idea of peacefully coexisting with Jewish Israel.

The problem is important enough that an American-Israeli-Palestinian committee monitoring incitement was established in 1998. And it is intractable enough that the committee disbanded after a year of bickering, unable to reconvene since.

Israel has recently given the issue a higher profile, including the publication in The New York Times of a column by International Affairs Minister Yuval Steinitz entitled “How Palestinian Hate Prevents Peace.” Steinitz makes a strong case that constant Palestinian dehumanization of “Zionists” as “barbaric monkeys” or “fork-tailed devils,” glorification of terrorists (including Hitler), and denial of Jewish history are internalized by the Palestinian population—particularly children—and make it impossible for any culture of peace to take root.

That column apparently drew diplomatic blood. The PA felt compelled to react, choosing statements by Likud Beiteinu’s Avigdor Lieberman as their target. Recently, Lieberman said that PA President Mahmoud Abbas is no partner for peace. He stated that the current atmosphere is not conducive to any final status agreement due to the radicalized atmosphere cultivated by incitement in Palestinian textbooks and media.

That was tough talk by Lieberman, but hardly inflammatory. Still, PLO negotiator Saeb Erekat, the PA foreign ministry, and the PA’s official news agency all went over the top condemning the comments, calling Lieberman’s statements “dangerous incitement” and “state terror.” For good measure, they called Lieberman a “gangster” and a “fascist.”

The mutual allegations of incitement fly. But there is an imbalance in the type, nature, and source of the incitement by the respective sides. When Israel’s open democracy clashes with the PA’s undemocratic political culture, even verbal confrontations are asymmetrical. Sure, there are incendiary comments made by individual Israelis here and there, including some by politicians. But the incitement coming from the Palestinians is pervasive, and it comes from official PA channels.

At an institutional level, as Steinitz pointed out, the PA is constantly hammering messages that no Jewish state is legitimate, as there is no Jewish people and no Jewish history in Israel; that Jews and/or Zionists are corrupt creatures who corrupt those around them; that the Palestinian struggle will continue until Israel is uprooted and replaced with a Palestinian Arab state; and that all forms of resistance—terror included—are honorable and valid, subject only to the political expedience of particular tactics.

Furthermore, while Israeli media uncovers, reports, and condemns incidents of Israeli incitement, the Palestinian media is used as a vehicle to kindle and stoke incitement against Israel.

Schools provide another contrast. Israeli textbooks have extensive discussions of the Palestinian refugees created by the 1948 war and their plight in various countries; Palestinian textbooks, by contrast, have no maps of Israel, do not mention the Holocaust or the 800,000 Jewish refugees from Arab lands resettled in Israel, and pay no attention to any legal or historical claims the Jewish people have to the disputed land. Terrorists are lionized; Jews are demonized.

The rambunctious Israeli press, politicians, and public cover the political spectrum, and no one is shy about disagreeing with government positions regarding the peace process. An alphabet-soup of Jewish and Israeli organizations regularly protests government policy.

Yet focusing on incitement misses a more subtle—but more fundamental—part of the equation: the absence of contrary, counter-incitement by Arab and Palestinian voices.

The rambunctious Israeli press, politicians, and public cover the political spectrum, and aren’t shy about disagreeing with government positions regarding the peace process. An alphabet-soup of Jewish and Israeli organizations regularly protests government policy.

By contrast, where is the Palestinian dissenting opinion? Where are the Arabic opinion columns arguing that Jews aren’t treacherous devils? That Jews have a deep and ancient connection to the land? That blowing up Israeli cafes and buses is inherently wrong? That real peace with a Jewish Israel isn’t an entirely bad idea? That peace may require that not all of the millions of descendants of 1948 refugees be able to settle in Israel?

Where is the Palestinian Peace Now? The Arab Voice for Peace? P-Street? The Palestinian movement to boycott and divest from Palestinian entities until terror and violence against Israelis is ended?

Curbing Palestinian incitement would go a long way toward peaceful coexistence. But incitement is only a symptom; the uniformly anti-Israel monopoly on Arab and Palestinian opinion is the bigger problem.

Abraham Katsman is an American attorney and political commentator living in Israel. More of his work is available at abekatsman.com.