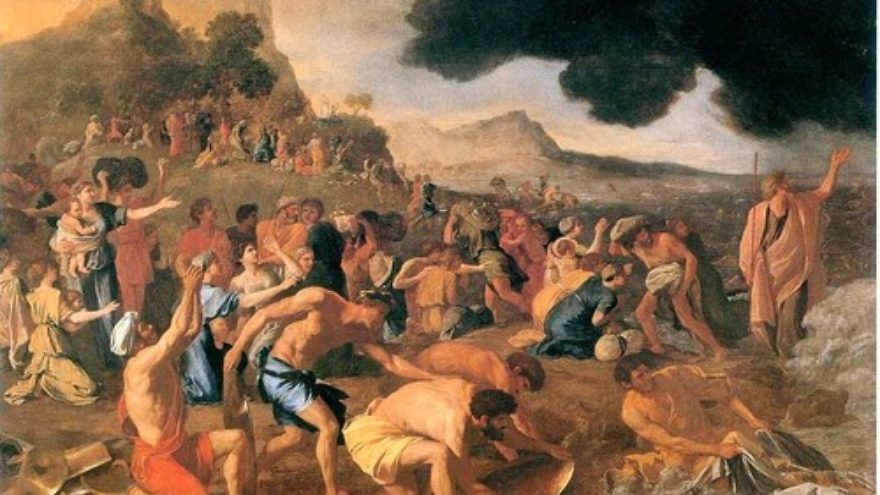 The Israelites left Egypt on the first day of Passover, but the Egyptians didn’t leave them until the sea separated them forever on the seventh day. By celebrating Passover for seven days, we celebrate ambivalent feelings of joy and stress. Shabbat Shira—the Shabbat whose Torah portion contains the song sung by Israel after the splitting of the Red Sea—invites us to focus on the miracle of Passover’s seventh day.

Just imagine the unbearable stress when Israel was caught in a death trap between the Egyptians and the sea, the shouts, cries, and prayers. Imagine the hand of Moses raised, the long and dark night between the protecting pillar of fire and the cloud, the great wind splitting the sea in two, the first steps into the water, crossing on dry land, seeing the vicious enemy destroyed.

It is not surprising that it resulted in an epic song. While evil was drowned in deep water, happiness flooded Israel. Only a heartless man wouldn’t sing. How many of us are capable of imagining this and meaning what they say in Exodus (15:1-2): “Sing to God…This is my God, and I will glorify Him.” What a great national miracle that was, once upon a time.

Is this episode still relevant for us today? When we think of the Sinai revelation, it’s clear—we have the Torah. But is something left from the Song at the Sea? If the answer is yes, what is the key for finding meaning?

Our sages interpreted the future tense of the song as indicating a song that hasn’t yet been sung. Thus, for example they say, “It is not written, ‘then Moshe sang,’ but ‘will sing.’” The sages also attributed a double reading to the words “elohay avi.” They read it as both, “the God of my fathers,” and “God is my father.” They elaborated on the significance of the song to “every single generation.”

My grandmother, Savta Privah, sang her personal song at the sea this week, more than 70 years ago, when she was liberated from Auschwitz. On her way from the refugee camps to Israel, she told my grandfather, “Now that we are making aliyah to Israel, from now on, we are Zionists.”

Going down from the ship, my grandfather, Saba Menachem, was asked for his occupation. He had lost his parents at a young age and had worked for his living even before the Holocaust.

Very well, they said, register with the labor union and we will find you a job.

“I had enough red flags in Europe,” my grandfather said, and established his own business.

Ironically, he found work at Mishmar Ha’Emek, one of the most anti-traditional Israeli kibbutzim. He was the only observant employee. Back then, they had two dining rooms, one for the young kibbutznikim and another one for the elders, because only they kept kosher.

My grandfather—a young man at that time—used to eat with the elders. One day, Shoshana Hazan, mother of Yaakov Hazan, leader of the Shomer Hatza’ir youth movement, came to his table with two Shabbat candlesticks.

“These are our family silver Shabbat candlesticks,” she said, “but my daughter-in-law would never use them. Take them to your wife to light Shabbat candles.”

After my grandparents passed away, my mother and uncle brought the candlesticks back to the place they came from. In Moshav Nahalal, near Mishmar Ha’Emek and itself one of the anti-traditional fortresses of the Labor movement, the children and grandchildren of those anti-religious kibbutznikim have established a secular prayer house. We brought the Shabbat candlesticks to their shul, learned, sang, and prayed together.

This is another great national miracle of our generation in Israel. Many Israelis are again feeling the presence of spirituality in their life, and they are seeking the God of their ancestors that they missed.

This story is one example of the phenomenon of Jewish renaissance in Israel today, a miracle that will change Israeli culture. The key to its success is that Israelis are seeking an authentic spiritual experience of validation of each individual Jewish identity and a strong connection to our tradition.

For many years, Israeli society was split between religious and secular, like two fortresses with an abyss between them. Each tried to protect the inside, to preserve its own identity, while negating the other. Today, more Israelis are bridging this gap. They are keeping their individual identities but striving to influence the Jewish character of the outside, to strengthen this togetherness of the Jewish people as a whole.

A year and a half ago, the Hartman Institute and HaMidrasha at Oranim founded a rabbinical school for Israeli rabbis. The first cohort comprises 16 fellows, many of whom already play a key role in the field of Jewish renaissance in Israel, and includes Orthodox, secular, and liberal participants, some of whom have already qualified for the rabbinate of a particular group. All are teachers, educators, community leaders, and leaders of Jewish organizations in Israel. This first group will be the role models for a new type of Jewish leadership that will emphasize common Jewish heritage and values, the togetherness that Israeli society needs so desperately.

This togetherness is also rooted in our Passover holiday. The great miracle concluded with a verse usually translated as, “And the people feared the Lord, and believed the Lord and His servant Moses” (Exodus 14:31). But you can also translate it, “And the people saw the Lord,” as our sages did, when they said, “A bondswoman at the sea could see what neither Isaiah nor Ezekiel ever saw.”

This wasn’t just a mighty manifestation of the power of God; what the people experienced wasn’t fear. Our sages had a deep insight: When you’re afraid you don’t start singing—you’re paralyzed. It wasn’t a frightening salvation; it was a revelation. This revelation was the big equalizer—everyone sang together. You didn’t have to be Isaiah or Ezekiel, Moses, Miriam the prophetess, a lay person, or a bondswoman—all saw God together and sang.

That was true when all Israelis went out to the streets singing and celebrating the United Nations resolution that established a Jewish state. Witnessing our modern miracles in Israel, we simply have to open our eyes and souls. As we crossed the sea together, as we established a Jewish state together, as we are fighting together for its physical survival, we should work together for its spiritual flourishing. Thus, God willing, we would conclude once again with a national song together.

Dr. Shraga Bar-On is a member of the Beit Midrash for New Israeli Rabbis Program of the Shalom Hartman Institute and HaMidrasha at Oranim.