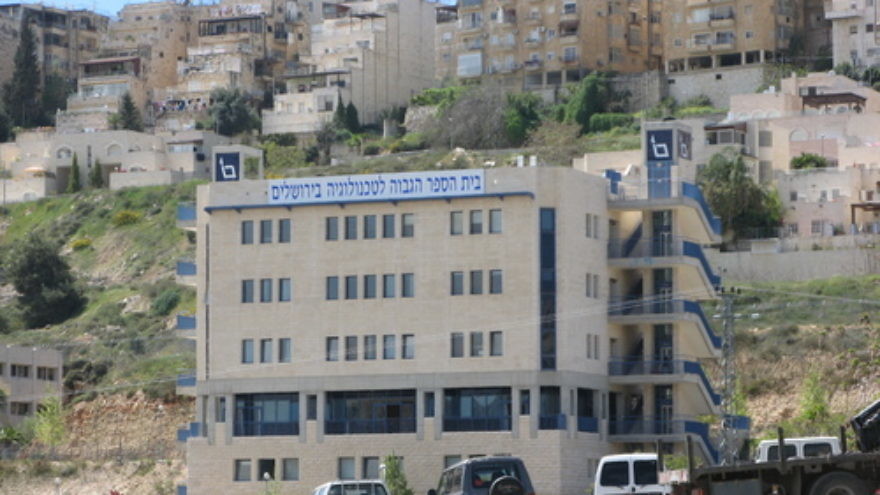 The main campus of the Jerusalem College of Technology, where haredi students can commit time to the study of Torah while simultaneously developing their technical skills. Credit: Yakov via Wikimedia Commons.
Republish this article
861 WORDS
Spread the word.
Help JNS grow!
Share now:

According to a Bank of Israel study conducted in 2011, less than half (46 percent) of Israel’s haredi men were gainfully employed that year. By way of an “apples to apples” comparison, the employment rate among all Jewish men in 2011 was a significantly higher 78 percent. Of course, this deviation is partially by design, as haredi culture has long developed the belief that immersion in Torah study should remain the Jewish male’s sole occupation, even at the cost of a wage-earning career.

Without delving into the substantive halachic (Jewish legal) merits of this philosophy, its impact must be recognized. By and large, haredi women have willingly—and sometimes, unwillingly—carried most of the financial burden for their families, while simultaneously raising a large number of children. Since males typically have more substantial employment options than females, haredi women face many challenges in finding jobs suitable for their overloaded schedules.

Criticizing this culture that promotes reverse gender roles, many academics and members of the secular community have branded the haredim as abusers of social norms and accuse them of entering a state of “voluntary poverty” in which they are left without a source of stable income.  And it’s hard to argue with the facts on the ground.

With large numbers and no formal secular education, haredi families have experienced diminished living standards and increased difficulty in obtaining real financial assistance for basic human necessities, such as food, water, and children’s clothing. This economic strain places an unnecessary burden on each family and on many occasions has negatively impacted the peace in their homes, or shalom bayit in Hebrew. Financial instability most definitely causes daily strife in a marriage, inevitably leading to unhappiness and constant infighting between spouses.

In the Family Relations journal in 2012, a Kansas State University researcher published findings of a study that deciphered longitudinal data from the surveying of more than 4,500 couples. The study found that couples who argued about money early in their relationships—regardless of their income, debt, or net worth—were at a greater risk for divorce. The research also concluded that arguments about money were longer and usually more intense than other types of marital disagreements. Arguments about money, whether initiated by the husband or the wife, were by far the top predictor of divorce, more than children, intimacy, in-law,  or any other internal or external factor, according to the study.

Couples usually fight about money because they are experiencing negative financial events (like job loss), and the stress that accompanies financial problems overwhelms the spouses and causes shalom bayit issues. But the effects of shalom bayit problems are never confined to the walls of the home. In the case of a Jewish family, these problems affect the husband’s ability to conduct many tasks, such as remaining productive at work, learning Torah, and interacting with society at large. In extreme cases, this could lead to divorce, putting further financial strain on the family and on the entire Jewish nation, as the women and children may become a public liability.

For Israel’s haredi population, whose families are already viewed by many in Israeli society as public liabilities, addressing this crucial shalom bayit issue could potentially improve the overall perception of haredim and, in turn, affect Israeli politics and the funding of haredi institutions.

Realizing the importance of shalom bayit (as even Hashem in the Book of Genesis intervened for the sake of Abraham’s shalom bayit) and recognizing Adam’s inescapable punishment that “by the sweat of your brow shall you eat bread,” many haredi men are now motivated to seek employment in order to pay for household staples such as food, clothing, and education. With no formal secular education, the haredi population is seeking out “hybrid institutions,” such as the Jerusalem College of Technology, which offer vocational training and professional career development in an environment where students can commit time and energy to the study of Torah while simultaneously developing their technical skills. It’s truly the perfect solution.

Students in these institutions develop their skills and lay the groundwork for a strong financial future, without compromising their long-held religious beliefs. This “kosher” option allows haredi families to focus on the health of their interpersonal family relationships instead of straining those relationships with monetary strife. Though this concept may seem elementary, it is truly revolutionary in the haredi world and needs the support of the entire Jewish community if it is to succeed.

Though there is the ever-present requirement to look out for our fellow Jews, the advancement of dual-curriculum, employment-focused education as the social norm in the haredi world is about so much more. It’s about promoting self-fulfillment just as much as it is about relieving the Israeli taxpayer. It’s also about preserving the sanctity of Jewish marriage and establishing a stronger, wiser, and more confident Jewish people and Jewish state.