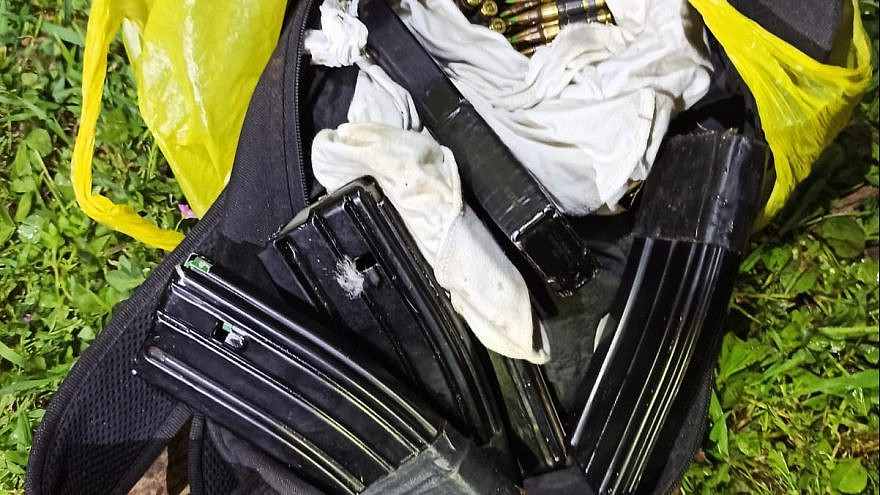 A cache of ammunition found in the possession of two suspects arrested in connection with the assault and robbery of an Israeli soldier on March 4, 2021. Photo courtesy of the Israel Police.
Spread the word.
Help JNS grow!
Share now:

(March 8, 2021 / JNS) The Israel Police on Sunday arrested two suspects in connection with the assault and robbery last week of an Israel Defense Forces soldier.

The suspects, both 25 years of age, are residents of the Bedouin village of Ibtin near Haifa, according to police. They were found by police in a hideout close to the nearby village of Zubaydat, together with a cache of ammunition.

The soldier, a member of the IDF’s elite Egoz unit, was engaged in a solo navigation exercise near Shfar’am in northern Israel at about 3 a.m. on March 4 when he was approached from behind by a vehicle. The vehicle followed the soldier for a time before coming to a halt near him. The vehicle’s two occupants then asked him if needed a ride, to which he made no reply but kept walking. The suspects then exited the vehicle and an altercation ensued, when the soldier’s rifle was stolen.

The suspects will be brought before the Nazareth Magistrate’s Court on Monday for a hearing on a police request to extend their detention, according to Israel Hayom.