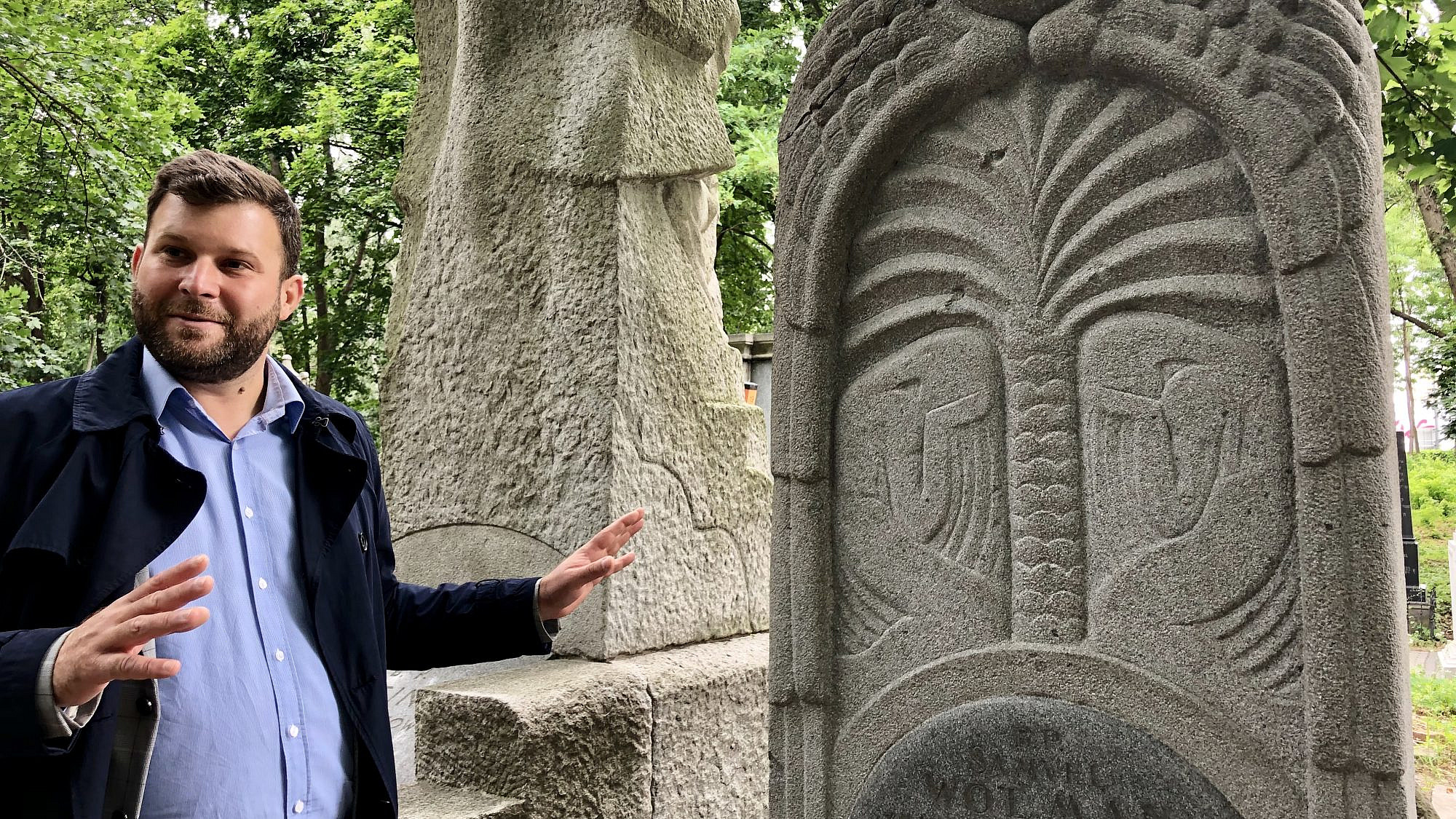 (July 24, 2019 / JNS) Michał Laszczkowski, CEO of Poland’s Cultural Heritage Foundation, spends a great deal of time discussing Jewish law with rabbis at various Jewish cemeteries across Poland; in fact, it’s safe to say that he does so much more than the average Jew. And yet, Laszczkowski is not himself Jewish.

As the visionary behind the $28 million restoration and documenting of Jewish sepulchral heritage in Poland, Laszczkowski has helped the organization raise funds from Poland’s Ministry of Culture and National Heritage and Capital Monument Conservation Office. In addition to their biggest project—cleaning up the major Jewish cemetery in Warsaw—other work includes the preservation of other Jewish and Muslim cemeteries, churches and various national heritage sites connected to Polish heritage abroad.

The Jewish cemetery in Warsaw on Okopowa Street was built in 1806 outside the city ramparts, and is one of the last Jewish cemeteries in Poland that is still being used. From its founding until 1939, some 150,000 Jews were buried there, making it the largest cemetery of its kind in Europe (according to number of people buried there) and representing 10 percent to 15 percent of Jewish tombstones in Poland. 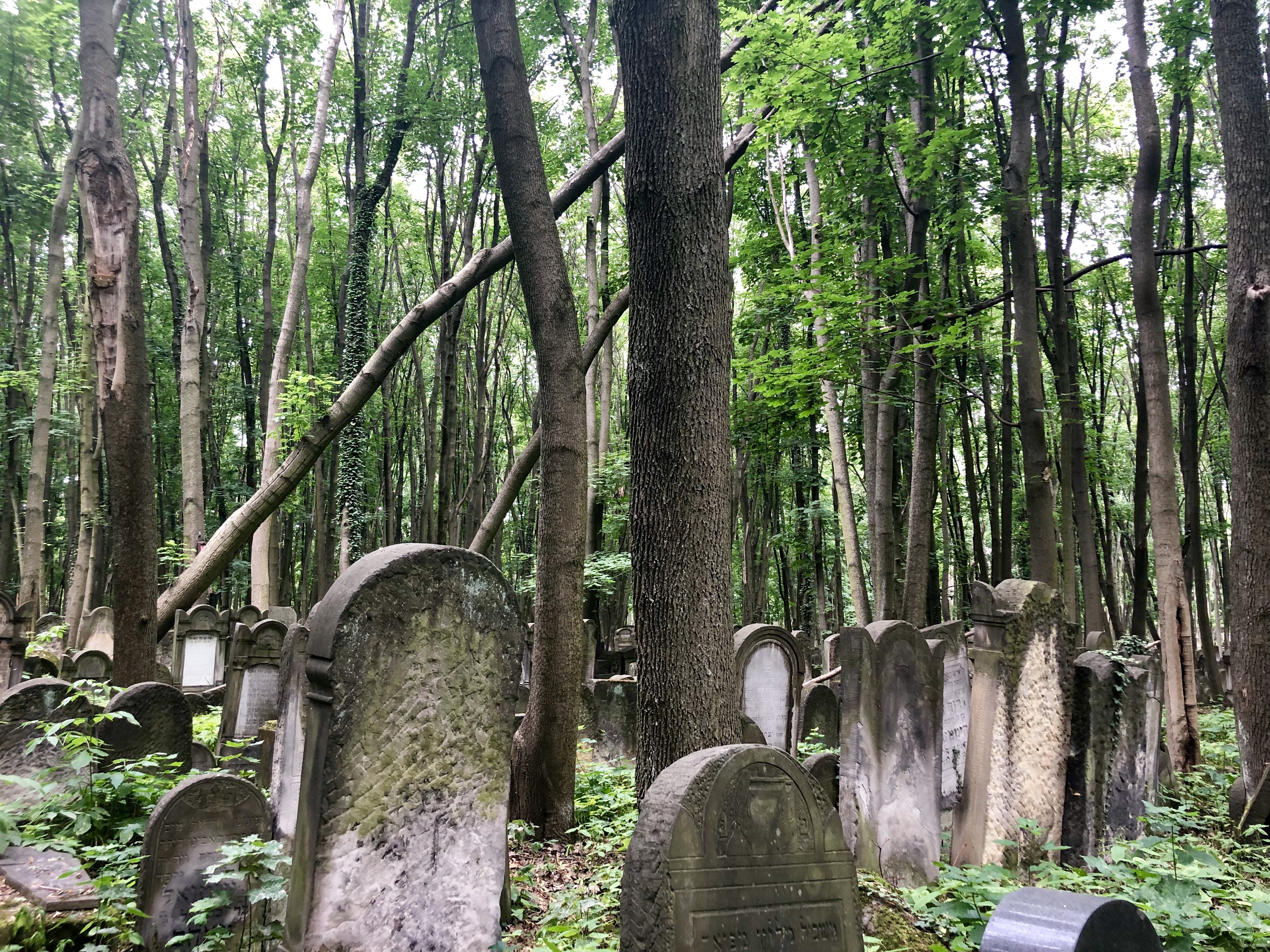 A view of the Jewish cemetery in Warsaw on Okopowa Street. Originally built in 1806, much of it became covered in forest after largely being abandoned after World War II. Photo by Eliana Rudee.

So far, under the direction of rabbis who ensure that the restoration work is done according to Jewish law, the organization has renovated more than 100 tombstones and gravestone art, they have also cut down bushes, weeds and about 500 wild trees that pose a danger to those who visit the cemetery. According to Laszczkowski, making the area safer and better preserved will bring more people to the cemetery, Jews and non-Jews alike.

“Right now, teachers are afraid to take responsibility for bringing students here because of an incident where a tree fell on a tourist,” he told JNS.

As the material heritage of the Jewish community was almost totally destroyed during World War II, with Nazis stealing Jewish tombstones for building projects and street pavements, Laszczkowski expressed the need for Poles “to have a place to understand Jewish heritage and contributions to Polish society.”

“They should know that Jews were in the public of Polish society.”

The cemetery does just that, with styles of the tombstones and the contents of the epitaphs reflecting the diversity of Warsaw’s Jewish community. Although the cemetery archives were burned during the war, and thus the identity of many buried there are unknown, information from the monuments show that among those buried at the cemetery are thousands of victims of the Warsaw ghetto, buried in mass graves; rabbis and tzadikim (“righteous Jews”); leaders of secular movements like the assimilation movement, Zionism and socialism; promoters of Hebrew; Yiddish writers, journalists and actors.

Exhibiting the prominence of Jewish presence in Warsaw, people buried there also include those who were at the forefront of Polish life: leaders of Polish uprisings, industrialists, physicians, scientists, artists, publishers, philanthropists and patrons of culture.

Laszczkowski views the cemetery as it exists right now, however, as a missed opportunity. While 40,000 tourists visit the cemetery each year, he estimates that only 10 percent of them are non-Jewish. With only 400 Jews living in Warsaw (less than 1 percent of the community of nearly 375,000 in 1939) most Poles do not know Jews or about Jewish tradition, maintained Laszczkowski.

“They should know that Jews were in the public of Polish society,” he said.

Ola Waszak, project coordinator for the Cultural Heritage Foundation, noted that before she began to volunteer at the cemetery and started her job, she had never been to the site and didn’t know its history. 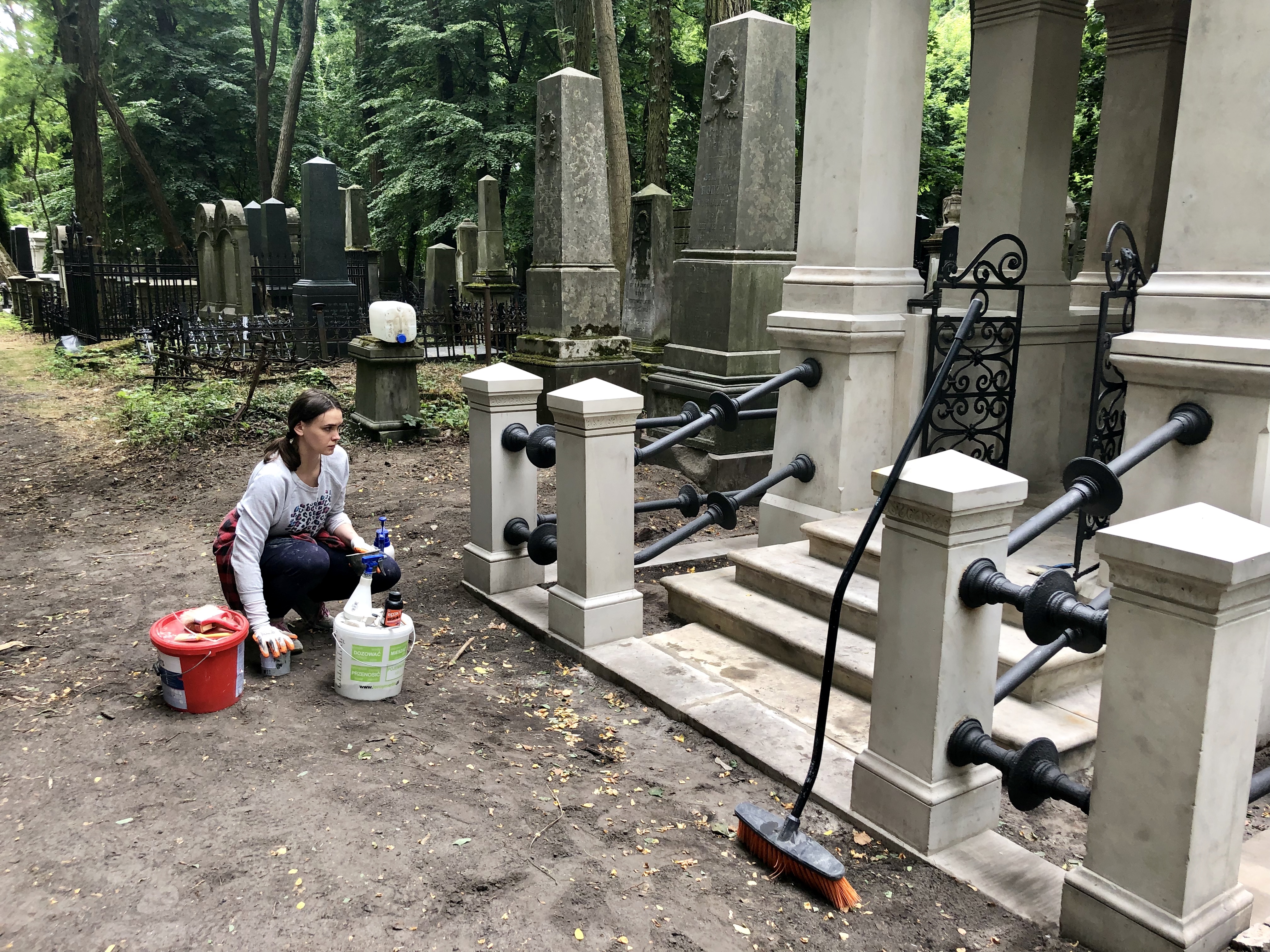 A woman cleans a tomb at Warsaw’s Jewish cemetery. Photo by Eliana Rudee.

Laszczkowski’s vision is to drastically increase the number of non-Jews who visit by making it a mandatory part of Polish education. “I want to organize a large program where every Warsaw student comes to this cemetery during high school,” he said.

Making the area safer and better preserved will bring more people to the cemetery, Jews and non-Jews alike.

“Poles are afraid to come inside the cemetery, and so they don’t open the door. But once they come here during their education, they’ll know that all they have to do is open the door,” he explained. “I want to make this an exotic, attractive place, not just for students but also for Jews to visit tzadikim and relatives.”

In late 2017, after touring the cemetery with Laszczkowski, Polish Deputy Prime Minister and Minister of Culture and National Heritage Piotr Gliński agreed in the importance of the vision, allocating PLN 100 million (more than $26 million) to the Cultural Heritage Foundation.

The donation represented some 2 percent of the ministry’s 2018 budget, and nearly half of the budget earmarked for “institutions whose activities include taking care of the memory, culture and heritage of the Jewish nation,” which also includes the Auschwitz-Birkenau State Museum, the Jewish Historical Institute, the State Museum at Majdanek and the Museum of History of Polish Jews POLIN.

“The heritage of Jews is the heritage of Poland,” said Gliński in a meeting with Israeli journalists earlier this month. “Knowledge of Polish history, including Jewish history and during the Second World War, is insufficient everywhere,” he said. 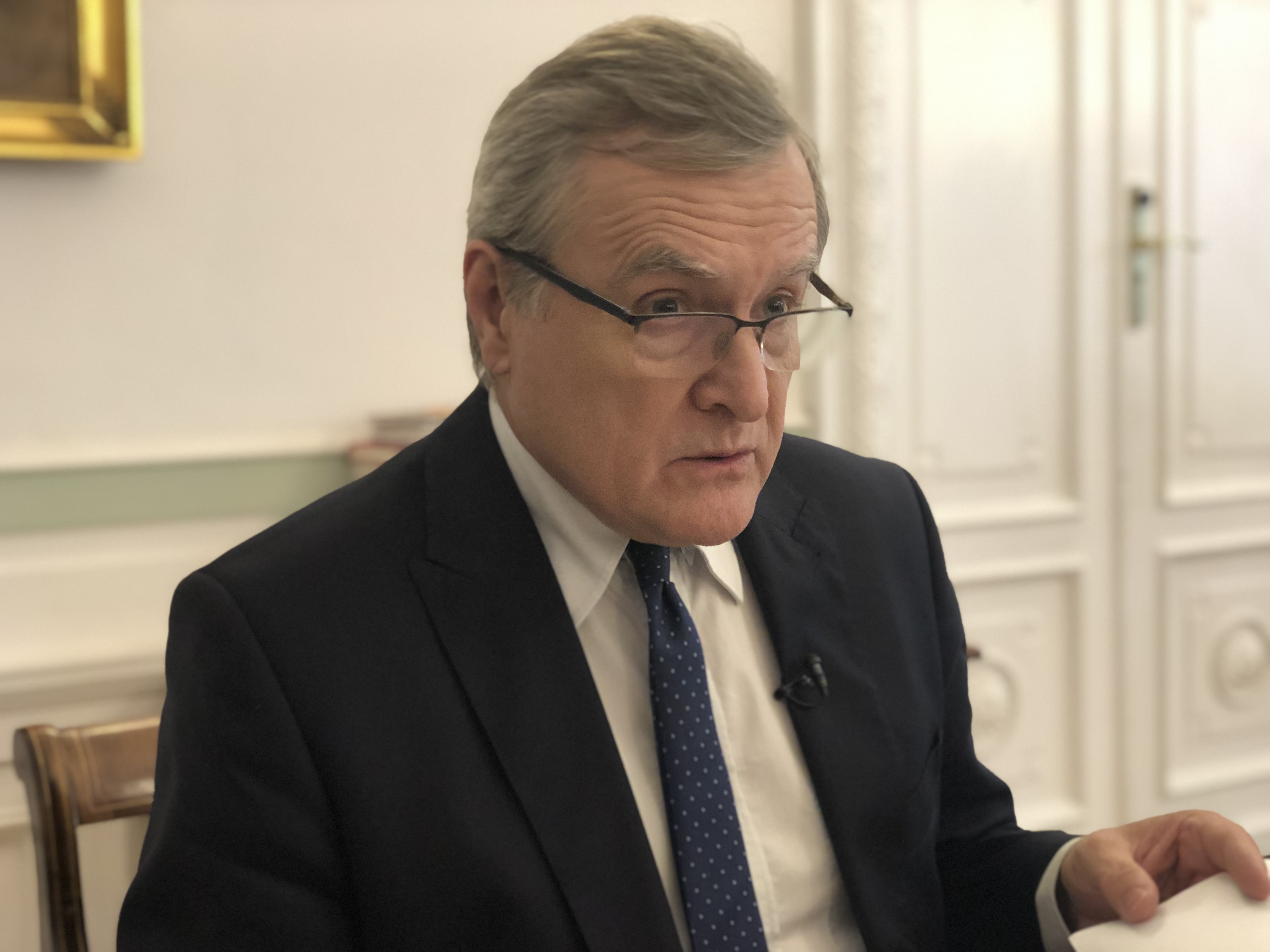 In the same year that the ministry allocated the budget for the Cultural Heritage Foundation, it also signed an agreement for the co-management of the Ulma Family Museum of Poles Saving Jews in World War II in Markowa, which according to the ministry is “of great importance to Poland.”

“I am responsible for this heritage,” said Gliński, noting that ministers from opposing political parties came together on this act. “It’s good for us; it’s good for everybody,” he said.

Laszczkowski estimates that one of the reasons for the large endowment is public diplomacy, “to show that Poland cares about common Polish-Jewish heritage,” he said.

One intention, according to Gliński, is to “increase mutual understanding and knowledge of a complicated history.”

“I hope it doesn’t get more political than it already is.”

In the context of some Israeli criticism that Poland’s lack of reparations, Holocaust bill and anti-shechita (Jewish ritual slaughter) bills were anti-Semitic, the deputy prime minister maintained that there is no visible rise in anti-Semitism in Poland, and while any anti-Semitism is “stupid,” he strongly criticized “anti-Polish sentiment” among some Israelis.

“It is important to eliminate the bad atmosphere and behavior on both sides,” he added.

In light of the controversial Holocaust bill (or anti-defamation bill as Poles call it, which forbade the use of the word “Polish” in relation to “concentration camps,” preferring the term “Nazi-German concentration camps in occupied Poland”), Laszczkowski maintained that while the intention of the bill was important—namely, to affirm that Poland did not collaborate with Nazis and were in fact “one of the most suffering nations in the Second World War—the bill was “inadequate” and “not the way to [achieve its goals].”

“I understand that some people are upset because Polish history is not well-known—in nearly every family, there was a death,” he said. “But because we don’t know Jews, we don’t feel their perspective.”

Gliński, too, noted that while it’s “hard to compare [the loss that Polish people experienced in the Second World War] to the Holocaust, material loss and deterioration of humanity in Poland was terrible, and it was all the fault of the German and Soviet occupants.”

“That is the opinion of 90 to 95 percent of Polish people,” continued Gliński. “Sometimes, our history doesn’t help us, but we have a lot of common interests.”

“I hope it doesn’t get more political than it already is,” said Waszak.

Although the cemetery repairs and upgrades are unlikely to bring back new Jewish life to Warsaw, Laszczkowski hopes that the restoration may initiate dialogue between peoples—both between Poland and Israel, as well as between Poland and its Jewish cultural heritage.