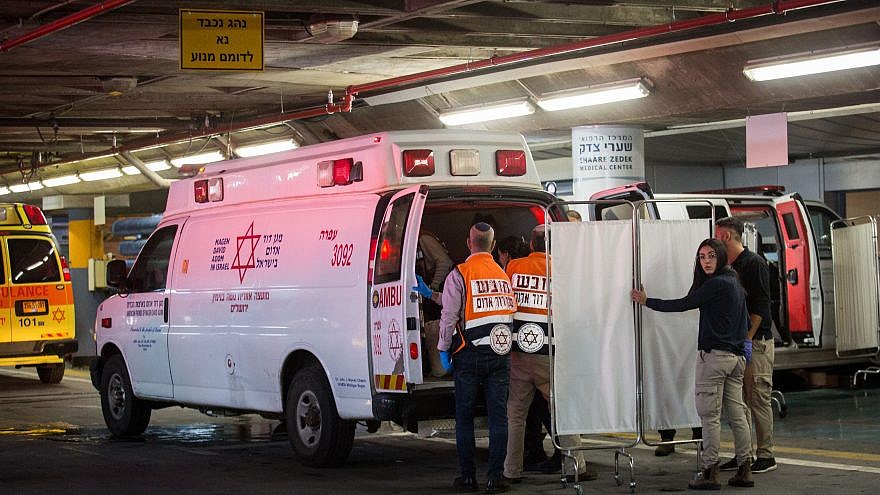 Israeli security and medical personnel evacuate an Israeli woman from the ambulance at the Shaarei Tzedek Medical Center in Jerusalem after she was was seriously injured in a terror attack in Ofra, Dec. 9, 2018. Photo by Hadas Parush/Flash90.
Spread the word.
Help JNS grow!
Share now:

(December 10, 2018 / JNS) A young pregnant woman and six other travelers were injured in a Palestinian shooting attack at a bus stop outside the Jewish town of Ofra on Sunday night.

The woman, who was brought to Jerusalem’s Shaarei Zedek Medical Center in critical condition, has had her condition upgraded to stable, but her son, delivered by emergency Caesarian section, has been downgraded to critical. 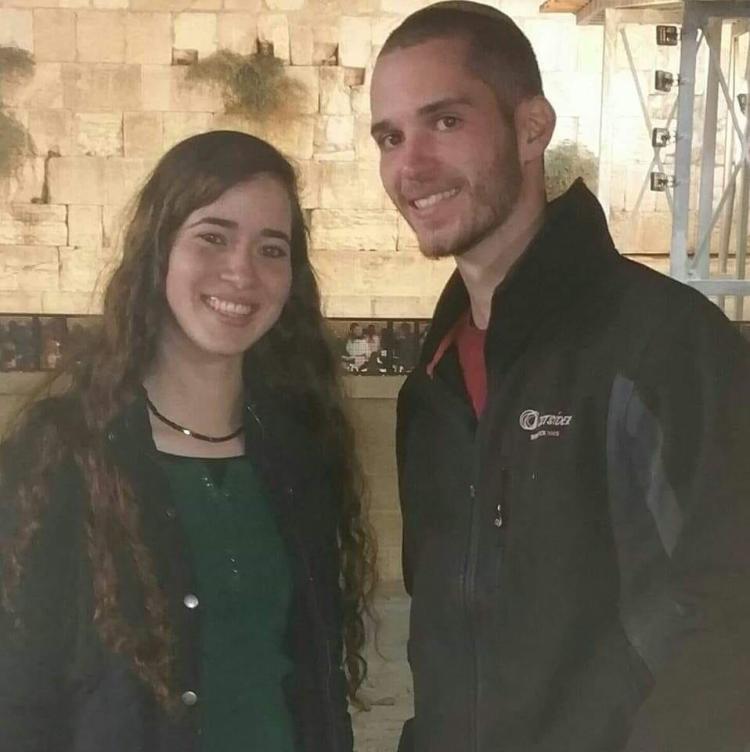 The attack took place on the eighth night of Hanukkah at a popular hitchhiking post and bus stop.

Video of the attack showed a white car driving up to the post and slowing down as it passed a group of Jews standing at the stop. The travelers are seen scrambling away as they were sprayed with bullets, with the car immediately driving away.

One pregnant 21-year-old woman, Shira Yael Ish-Ran, was shot in the lower abdomen and was said to be “fighting for her life,” though doctors managed to save the life of her first child, delivered at just 30 weeks gestation. The boy was immediately transferred to the neo-natal intensive care unit, but his condition worsened overnight, and he is now attached to a ventilator.

“A pregnant woman who loses so much blood cannot provide the oxygen necessary for the baby in her belly,” Dr. Alon Schwartz, a surgeon at the hospital told Army Radio on Monday. “This was apparently the harm to the baby that we discovered.”

According to Schwartz, the young woman lost a lot of blood and arrived at the hospital in a state of shock. The hospital reported that she has regained consciousness and showed signs of movement, but that she remains in life-threatening danger. Her family requested continued prayers for Shira Yael bat Leora Sarah and for her son, Tinok ben Shira Yael.

The woman’s husband was also injured in the attack and underwent surgery at Jerusalem’s Hadassah Ein Kerem Hospital. His condition was said to have improved from moderate to mild-to-moderate.

“Praying for the recovery of those injured in the despicable terrorist attack, including the young mother who brought life to the world from this hellish scene,” wrote Israeli President Reuven Rivlin on Twitter. “I  send my unreserved support to the security forces who are relentlessly pursuing the terrorists.”

IDF, border police and security services forces cooperated in a widespread manhunt for the terrorists in Palestinian enclaves near to the attack. Officials stated that the vehicle in which the attempted murder was committed is believed to have contained at least two occupants.