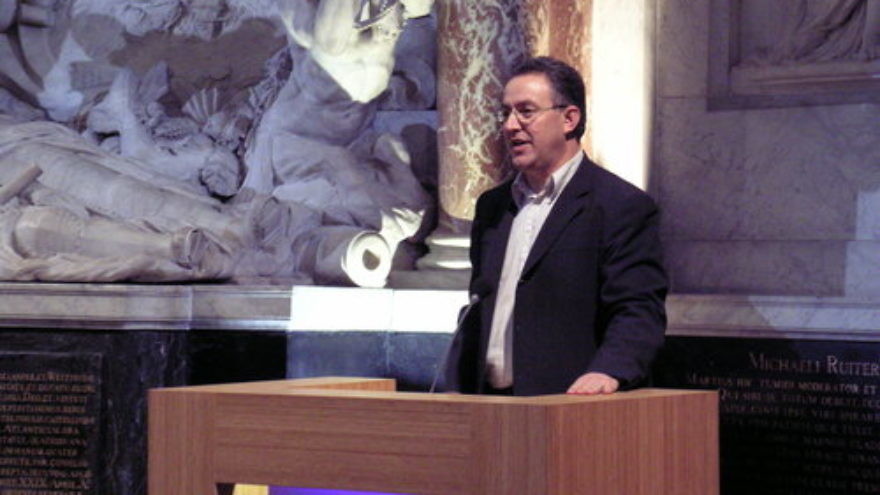 (March 28, 2017 / JNS) The mayor of the second-largest city in the Netherlands is refusing to block a conference by a pro-Hamas group, despite warnings by Dutch Jewish leaders and political figures the event could encourage anti-Semitism and embolden terrorists.

The Palestinian Return Centre (PRC), which is regarded by the Israeli and German governments as a support group of the Hamas terrorist organization, plans to hold its annual “Palestinians in Europe” conference April 15 in Rotterdam.

Netherlands Chief Rabbi Binyomin Jacobs told JNS.org he is “very concerned” the conference “will incite anti-Semitism or pro-terrorist sentiment” in the country, particularly among the country’s rapidly growing community of ethnic Turks. He said the PRC’s activities are “just like the ‘Denk’ party, whose three seats in the new parliament look small, but is the beginning, God forbid, of a direction which we don’t want to go.” Denk, which represents Dutch citizens of Turkish origin, is harshly anti-Israel.

A mob of militant Dutch Turks yelled “Cancer—Jews” as they rioted outside the Turkish consulate in Amsterdam March 11. They were protesting the Dutch government’s refusal to let a Turkish cabinet minister campaign among Dutch Turks concerning an upcoming referendum in Turkey.

Jacobs said he and other Jewish leaders have urged Rotterdam’s mayor, Ahmed Aboutaleb, to cancel the PRC conference. He said the mayor responded that “since there is no proof that Hamas is involved, he can’t do anything.” The rabbi said the mayor promised that “a few of his people” will be present at the April 15 PRC event to “make sure nothing anti-Semitic will happen or will be said.”

Maarten Molenbeek, Aboutaleb’s spokesperson, told JNS.org he would not comment on the controversy due to “a busy schedule,” and also because “we want to be prudent on this case.”

In a recent op-ed for the Huffington Post, Simon Wiesenthal Center Associate Dean Rabbi Abraham Cooper and former Jerusalem Center for Public Affairs chairman Dr. Manfred Gerstenfeld, described the question of whether or not the conference is “a litmus test” for Aboutaleb. They noted that while Aboutableb “is a member of the extreme anti-Israel Labour Party” in the Netherlands, he is “a moderate Orthodox Muslim” and “has not publicly expressed anti-Israel sentiments in the past.”

The Center for Information and Documentation on Israel (CIDI), a Dutch pro-Israel group, recently wrote to Interior Minister Ronald Plasterk and Justice Minister Stef Blok, urging them to block the PRC conference on the grounds that “the organizers of this conference are affiliated with the terrorist group Hamas.” CIDI Director Hana Luden told JNS.org the ministers have not yet replied. Luden said CIDI is “satisfied” with a letter it has received from Mayor Aboutaleb, but declined to reveal what he wrote.

Dutch journalist Carel Brendel, who has written about the PRC’s activities, told JNS.org the evidence of the PRC’s connections to Hamas is “overwhelming.” He noted that two of the organizers of the upcoming conference, Adel Abdallah and Amin Abou Rashed, have received awards from Hamas leader Ismail Haniyeh.

The PRC, which was established in London in 1996, contends that millions of Palestinian Arabs from around the world should be allowed to settle in Israel. Its current initiatives include the “Balfour Apology Campaign,” which seeks to have the British government publicly apologize for its 1917 declaration endorsing the establishment of a Jewish national home in what was then Mandatory Palestine.

Then-Israeli Defense Minister Ehud Barak outlawed the PRC in 2010 because of its Hamas connections. According to the Meir Amit Intelligence and Terrorism Information, the leadership of the PRC includes numerous Hamas activists. In a 2011 report, the German Interior Ministry stated “Hamas does not operate openly in Europe. Instead it uses, for instance, the Palestinian Return Centre in London as a forum.”

Rotterdam City Council Member Tanya Hoogwerf told JNS.org that her Leefbaar Rotterdam faction has repeatedly pressed the mayor to cancel the PRC gathering. “Especially with anti-Semitism on the rise in the Netherlands and Rotterdam as well,” she said, “we think it’s irresponsible and a bad signal to lay out a red carpet for on organization that believes and states in it’s own manifesto that all Jews need to be killed.”

Hoogwerf said she and her colleagues “are still awaiting a response to our questions asking the mayor on what information or advisory from intelligence agency his decision is based.”