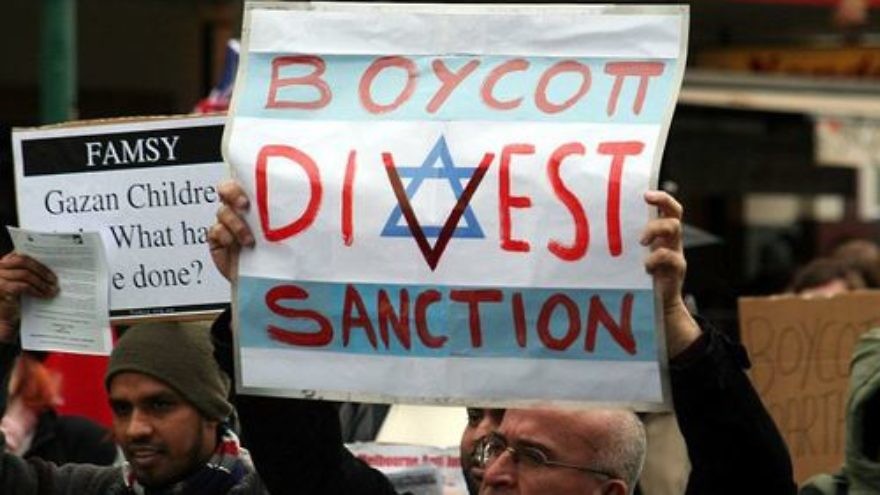 The pro-Israel campus groups Hillel International and the Israel on Campus Coalition (ICC) were denied the right to present a discussion at the Jan. 9-12 Modern Language Association (MLA) convention in Chicago, an event that is seen as a possible precursor to an MLA academic boycott of Israel that would mirror recent boycotts by the American Studies Association (ASA) and the Native American and Indigenous Studies Association.

MLA’s convention includes a roundtable discussion titled “Academic Boycotts: A Conversation about Israel and Palestine,” which will feature supporters but no opponents of the Boycott, Divestment and Sanctions (BDS) movement against Israel.

In a development that was first reported by JNS.org, Hillel and the ICC asked the 30,000-member MLA for the chance to present what they called an “open discussion featuring MLA members regarding academic freedom in Israel, its territories, and Gaza,” but MLA said the deadline to book a meeting at the convention had passed.

“We believe the members of the MLA deserve to hear a far more diverse set of perspectives on the issue of academic freedom in Israel and nearby countries. The MLA members, as academics, certainly can appreciate the value of multiple perspectives on what is a very controversial issue,” ICC’s Baime said.

“MLA has its policies, as any organization is privileged to do. We are disappointed that they wouldn’t make room for us at the convention,” Noam Neusner, a spokesman for Hillel International, told JNS.org.

As an alternative to the MLA panel, the ICC and Hillel have organized a discussion on academic freedom in Israel titled “Perspectives Against Academic Boycotts” on Jan. 9 in Chicago. The alternative panel features three MLA members—including Russell Berman, a past MLA president, and scholar Ilan Troen, chair of the Brandeis University Israel Studies program and a professor at Ben-Gurion University of the Negev.

Ali, the organizer of the MLA convention’s roundtable on BDS, told The Chronicle of Higher Education that the roundtable assumes that Israel violates the rights of Palestinians, and that the debate will center on what to do about it.

“If people want to come and debate occupation, I think it will be a waste of their time, because that’s not what the roundtable is about,” Ali said.

MLA’s convention will also consider a resolution that condemns Israel for “arbitrary denials of entry to Gaza and the West Bank by U.S. academics who have been invited to teach, confer, or do research at Palestinian universities.”

Hillel spokesman Neusner said the MLA resolution overlooks the “simple fact of life” that Gaza is governed by a terrorist group, Hamas. As such, Gaza’s borders are “closed for everyone and everything other than humanitarian purposes,” noted Neusner, meaning that denials of entry into Gaza are not “arbitrary,” as MLA claimed. In its online guidelines for U.S. citizens wishing to enter and exit Jerusalem, the West Bank, and Gaza, the Consulate General of the United States in Jerusalem echoes Neusner’s point by reminding that access to Gaza “is controlled by Hamas, a designated Foreign Terrorist Organization.”

“The United States Government for some time has warned American citizens to avoid travel to Gaza,” the guidelines state. “Due to the situation there, the U.S. government cannot assist Americans in entering Gaza and cannot provide assistance in exiting Gaza.”

“The [MLA] resolution addressing Gaza, just on its face, shows how ill-considered it is,” Neusner told JNS.org.

The U.S. Consulate’s guidelines also state that American citizens applying for entry into Israel and the West Bank “are subject to security and police record checks by the Government of Israel and may be denied entry or exit without explanation.” While the MLA resolution accuses Israel of “arbitrary” denials of entry into the West Bank, the Jewish state’s entry policies are “quite consistent with policies here in the United States” and other countries, explained Neusner.

“What we don’t understand is why Israel is being held to a higher standard than the U.S is, than the U.K. is, or Australia, or France,” he said.

“Hillel is troubled by that double standard, and it reflects poorly on an esteemed academic organization such as MLA that it should allow this resolution to come up for a vote,” Neusner added.

While the MLA resolution does not call for an academic boycott of Israel like the one recently endorsed by the ASA, Neusner said, “Make no mistake. [MLA] will pursue a full BDS resolution in the future and they will use this resolution [from their Chicago convention], should it pass, as a pretext for that effort.”

“We feel confident that if MLA members [and] delegates come to this issue with a free and inquiring mind, they will see that this resolution is merely an effort to delegitimize Israel’s rights as a sovereign state,” he said.

MLA also rejected a JNS.org application for a press credential to cover its convention. Mark Aurigemma, a communications professional representing MLA, wrote in an email to the JNS.org reporter who applied that the convention “reserves media credentials for outlets and journalists that are substantively focused on academic issues.”

“In reviewing your request we could only consider the clip that you authored, as you are the reporter applying,” Aurigemma wrote. “We did also visit your archive at JNS to see if there was other academic coverage there with your byline, but did not find anything that meets the convention’s criteria for media accreditation. In keeping with the convention policies, we cannot grant the credentials requested.”

In its application, JNS.org had submitted nine examples of stories it has published on academic issues, including one authored by the reporter who applied. In a follow-up conversation with JNS.org, Aurigemma said MLA’s decision not to grant JNS.org a press credential was based “exclusively on the fact” that the journalist who applied is not substantively focused on covering academic issues. Asked if there were other news outlets MLA rejected for press credentials on the same grounds, Aurigemma said there were three or four such outlets but refused to identify them.

Asked if MLA received, and accepted or rejected, an application from the anti-Israel news website Electronic Intifada, Aurigemma said, “I’m not personally familiar with that outfit.” He declined to discuss outlets approved for press credentials, citing MLA policy.

“MLA policy is we don’t disclose other journalists who are registered for the convention,” Aurigemma said.