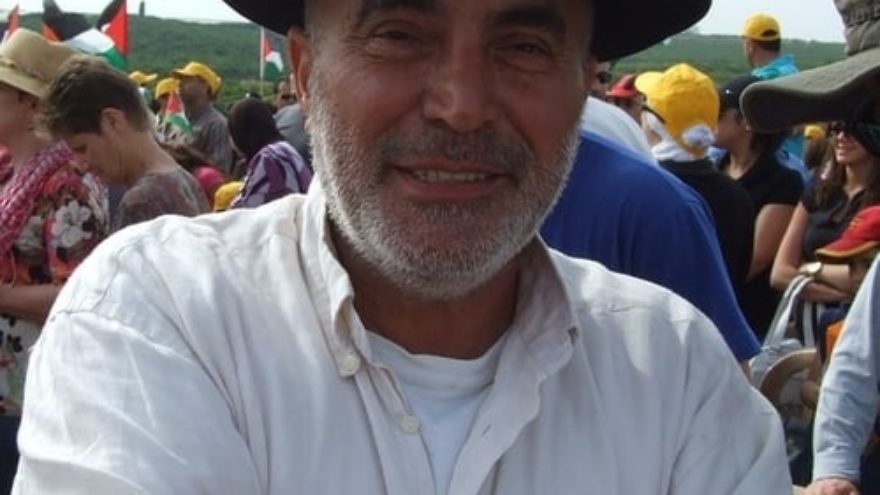 The PA prohibits Palestinians from selling land to Israeli Jews. The exposé was made possible by hidden camera footage filmed by members of Ad Kan (Hebrew for “up to here”), a group founded to uncover malpractice by left-wing groups in Israel. A police investigation has been launched into the revelations, and the allegations were bolstered after the prominent member of Ta’ayush featured in the program was arrested Monday by Israeli authorities while allegedly attempting to flee the country via Ben Gurion International Airport.

“Anyone who has followed the activities and agendas of the fringe anti-Israel NGO network should have seen the signs of immoral behavior behind the human rights façade,” Gerald Steinberg, founder and president of the Jerusalem-based watchdog group NGO Monitor, told JNS.org.

Uvda’s investigative program focused on Ezra Nawi of Ta’ayush and Nasser Nawaja of B’Tselem. According to a report by Liel Leibovitz of Tablet magazine, both men “are among the most internationally renowned members of Israel’s radical left…Nawi is considerably more prominent: when he was arrested, in 2007, for attacking Israeli policemen during a West Bank demonstration, more than 20,000 people—including a long list of prominent Israeli academics as well as progressive American celebrities like Noam Chomsky and Naomi Klein—signed a petition demanding his release.”

On the program, Nawi, who was previously convicted for the statutory rape of a 15-year-old Palestinian boy, is filmed discussing an encounter with Palestinian land sellers to whom he pretended to be interested in buying land.

“Straight away I give their pictures and phone numbers to the Preventive Security Force” (the PA’s security service), Nawi says in the footage. “The Palestinian Authority catches them and kills them. But before it kills them, they get beat up a lot,” he says.

Nawaja also appears on the video discussing the exposure of such Palestinian landowners.

Israeli Prime Minister Benjamin Netanyahu posted on Facebook that Uvda’s exposé “unmasked radicals among us, whose hatred for settlements has pushed them over the edge to the point of delivering innocents for torture and execution. Those who encourage murder cannot continue to hide behind the hypocritical pretense of caring for human rights.”

While it is not known whether any Palestinians were in fact executed because of information provided to the PA by the detained activist, Ad Kan has filed a police complaint against Ezra Nawi. He was then detained Monday on suspicion of conspiring to commit a crime. A remand hearing was set for Tuesday, and an order was issued preventing him from meeting with a lawyer for five days.

His lawyer, Leah Tsemel, said there were no grounds for Monday’s arrest.

“He did not commit any crime, nor was he called in for questioning [before the arrest],” Tsemel said, Israel Hayom reported.

Both B’Tselem and Ta’ayush have responded to the controversy. B’Tselem posted on Facebook that Uvda’s program was “based entirely on materials received from people who pretended to be Ta’ayush activists…[Uvda] did not conduct the investigation itself.”

B’Tselem said Nasser Nawaja is a Palestinian who has been fighting “enormous forces that have been trying for years to evict him and his family from their land in favor of [Jewish)]settlers. When he found out that a Palestinian citizen of Israel…is offering lands partly owned by his family for sale [to Jews], he reported this to the Palestinian authorities. This is the only legitimate course of action for Palestinians considering the fact that the Israeli authorities refuse to protect Palestinian land owners in the region from settlers overtaking their land…Naturally, B’Tselem opposes entirely any torture or execution.”

B’Tselem also alleged a possible conspiracy by Ad Kan, writing that Uvda staffers should have checked the suspicious coincidence in which the Palestinian landowner contacted Ta’ayush’s Nawi just as the Ad Kan activist was filming with a hidden camera.

“The documentary aired last week on Channel 2 is just the beginning. We have more materials on Ezra Nawi, as well as on B’Tselem and other left-wing NGOs,” Ad Kan activist Liran Weiss told the Tazpit News Agency.

In fact, a second Channel 2 revelation showed that Nawi has been on the payroll of two other left-wing groups known for criticism of Israeli policies, Breaking the Silence and Rabbis for Human Rights (RHR).

“Ezra Nawi worked for us at a fraction of a position in the last few months. We had no awareness of what was broadcast in the Uvda report, and those things stand in stark contrast with the spirit of our organization. Nawi’s employment with us has been suspended following the broadcast and we will conduct a hearing with him,” RHR said in a statement.

Breaking the Silence told Channel 2, “We don’t work for the Stasi (East Germany’s Ministry of State Security) and we don’t reply to the Stasi inquiries. Whoever wants a Soviet bloc-style police state—good for them.”

The controversy surrounding Ta’ayush and B’Tselem comes as Israeli Justice Minister Ayelet Shaked is trying to pass an NGO transparency bill in the Knesset. The bill aims to force Israeli NGOs receiving more than 50 percent of funding from foreign governments to disclose their funding sources.

Ta’ayush does not disclose its funding sources, while B’Tselem is funded by the governments of Sweden, Switzerland, Denmark, the Netherlands, Norway, Germany, France, and the United Kingdom, in addition to the European Union and the New Israel Fund.

“The [foreign] government officials that provide [the Israeli NGOs] with millions of shekels, as well as the New Israel Fund, whose leaders created and continue to guide them, are their enablers. Either they deliberately turned a blind eye to the illegalities, or they failed [to conduct] due diligence,” NGO Monitor’s Steinberg told JNS.org.

The Obama administration, meanwhile, has criticized Shaked’s bill. On Monday, the U.S. Embassy in Israel released two statements outlining a meeting between U.S. Ambassador to Israel Daniel Shapiro and Shaked on Sunday, noting that the two discussed the bill and that the U.S. is concerned about a possible “chilling effect” it may have on Israeli society. The bill, critics say, is harmful to democracy because it only focuses on left-wing groups.

Steinberg said Shaked’s bill “reflects widespread Israeli anger at the European government funders of the NGO wars against the IDF and Israeli democracy. Her legislation would require these groups to register as ‘agents of foreign governments’—largely a symbolic move, but one that the NGOs and their supporters and doing everything to defeat. At the same time, the legislation, even if approved, would not apply to European governments, where the problem begins.”

NGO Monitor, said Steinberg, has proposed a set of NGO funding guidelines that can be negotiated by members of the Israeli Knesset or the EU Parliament. He added, “As the Channel 2 reports show, such irresponsible behavior, which empowers anti-democratic NGOs seeking to impose their private opinions on the elected Israeli government, can no longer be hidden from the public.”