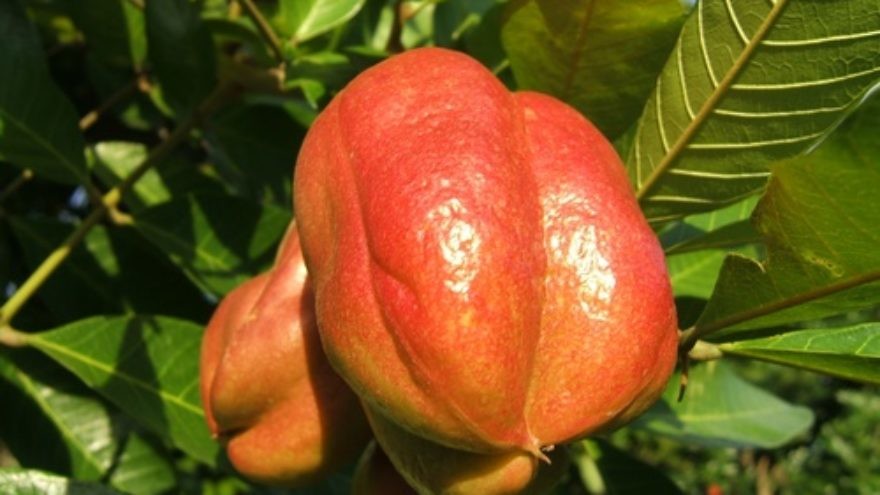 (June 26, 2013 / JNS) Let’s be honest, people—it’s 2013, and with rows of bottled pomegranate juice lining every convenience store refrigerator, the sight of those hundreds of little red stains-to-be on Rosh Hashanah night is just all too humdrum. So when you usher in the Jewish New Year with a new fruit this holiday season, why not treat your family to one of these uber-exotic natural delicacies? That is, if you can find them (and afford them).

The ackee is native to tropical West Africa, and was imported to Jamaica in 1778, where it now holds the rank of national fruit. A relative of the lychee and similar in taste and consistency, the ackee’s fruit is soft and white and grows around three large, dark seeds. Ackees are generally cooked and canned before being sold, with good reason: Eating an unripe ackee can result in a bout of the very bluntly named Jamaican vomiting sickness.

Also known as the horned melon, jelly melon, hedged gourd, blowfish fruit, or my personal favorite, the African horned cucumber. The kiwano is native to Africa but now grows in California, Chile, Africa, and New Zealand. Its flesh is bright green and jelly-like, and tastes like a cucumber with a hint of citrus. The peel can also be eaten and is rich in Vitamin C and fiber. Kiwanos can be eaten raw or cooked, juiced and mixed into lemonade, or even turned into gourmet ice cubes!

If you’re like me, the name of this fruit conjures up the image of a family of stubborn and misinformed German-Jewish farmers. Thankfully, the mangosteen is actually a tasty and widely desired fruit that grows almost exclusively in Thailand. Mangosteens are renowned for their delectable flavor and fresh fragrance, which prompted one botanist to say, “The mangosteen only has one fault; it is impossible to eat enough of it,” according to Mangosteen.com. Fresh mangosteens can be expensive and hard to find in the U.S., but the canned variety are easier to come by.

The jabuticaba tree is very striking, its fruit growing in clusters up and down its trunk rather than hanging from branches. It is native to southeastern Brazil, and is somewhat of a cultural icon for peoples of that region. The jabuticaba fruit is usually eaten fresh, but because it starts to ferment only three or four days after being picked, is also widely used in jams, wines, and liqueurs. Despite being deliciously sweet and chock full of anti-oxidants, the jabuticaba has not gained much popularity outside Brazil, as its very brief shelf life makes it impossible to export efficiently. In other words, good luck finding a fresh one outside Sao Paolo.

Not only do these really exist, you can actually grow them in your backyard (see YouTube for the instructional video). Whether they should count as a new fruit is debatable, however. The secret of squared, or cubic, watermelons is that they are really just regular watermelons grown into square-shaped glass boxes. An enterprising farmer on the Japanese island of Shikoku developed this method about 20 years ago to make the large, cumbersome melons easier to store. Today, the product is fashionable among the elite of Tokyo and Osaka and can be purchased for a mere 10,000 yen (about $83, or 16 round watermelons).