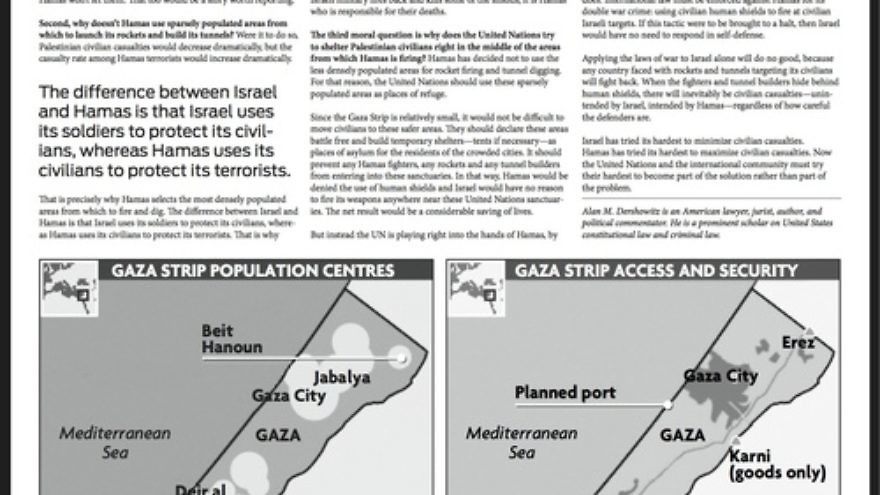 The British newspaper The Guardian turned down an advertorial piece penned by famed Harvard Law School professor and pro-Israel advocate Alan Dershowitz. In the ad, whose rejection was first reported by JNS.org on Aug. 15, Dershowitz refutes statements by many media outlets that all of the Gaza Strip is densely populated, a claim that has been used to justify the use of human shields by Hamas in its recent conflict with Israel.

“The British media is divided,” Dershowitz said in an interview. “But The Guardian, which holds itself out to be a purveyor of diverse truth, clearly reflects a bias against Israel on its editorial pages, as well as in its presentation of the news. Now that bias has spread to the advertising pages.”

The advertisement was based on an older editorial written by Dershowitz for the Gatestone Institute and was sponsored by the Wechsler Family Foundation, confirmed a New York City-based agency that specializes in overseas advertisement placements.

Dershowitz told JNS.org that newspapers “have a right to decide which ads to accept and reject,” but he questioned The Guardian’s decision not to run his advertorial.

“My column was factually sound and not a personal attack on anybody. It simply laid out the geographic facts of the Gaza Strip and its implications,” he said.

“Dershowitz was presenting a new point of view in this article,” Harry Wechsler of the Wechsler Family Foundation told JNS.orgin an email.

“Hamas was not forced into shooting their rockets from pads located in urban areas, thereby leading to unavoidable civilian deaths,” wrote Wechsler. “They were not shooting from some of the densest population centers anywhere because they had no other choice. No—the choice was there. Though not large, Gaza had ample space that was not densely populated—farm land, empty spaces where rockets could have been stored and shot from.  Furthermore, the U.N. could easily have developed temporary quarters in these same spaces for the sheltering of civilian refugees, far away from the sites of battle.”

The editorial board of The Guardian, which screens political or issues-based advertisements before they are published in the newspaper, “turned us down and refused to take our ad, even after working with their people for several days,” according to Wechsler.

In response to a comment request by JNS.org regarding The Guardian’s decision not to publish the Dershowitz advertisement, a spokesperson for the newspaper said, “The Guardian reserves the right to reject any advertisement.”

The Guardian’s refusal of the ad echoes a recent incident in which The Times of London, another major British newspaper, refused to run an advertisement featuring Holocaust survivor Elie Wiesel, who also spoke out against Hamas’s use of human shields. The Guardian was one of the newspapers that accepted the Wiesel advertisement, along with The New York Times, the Washington Post, the Wall Street Journal, and others.

After running the Wiesel ad, The Guardian received 140 complaints, leading it to clarify in a statement that its acceptance of the ad “does not equate to support or endorsement for the views expressed in that advertisement.”

The Guardian is not the only British newspaper facing backlash over the printing of advertising related to either side of the conflict between Israel and Hamas. London’s Jewish Chronicle (JC), which placed a Gaza appeal ad by the Disasters Emergency Committee in its latest issue, was forced to issue a statement that, “This is an advert, and not an expression of the JC’s view.”

According to Adam Levick—managing editor of CiF Watch, an affiliate of the Committee for Accuracy in Middle East Reporting in America (CAMERA) watchdog group—The Guardian’s history of publishing content reflecting Israel’s point of view was already limited before it turned down the Dershowitz advertisement. The Guardian has occasionally published pro-Israel op-eds, including some by Dershowitz, but those instances are rare.

“There was recently a Guardian editorial condemning anti-Semitism,” but for the most part “their coverage, the sensational headlines which suggest that Israel intentionally kills Palestinian civilians in the most sensational and vitriolic manner… actually incites anti-Semitism in the Diaspora,” Levick told JNS.org.

Particularly notable, Levick added, is The Guardian’s nearly complete silence regarding the use of human shields by Hamas.

“The Guardian rarely shows photographs of Hamas fighters firing from densely populated areas. They continue to perpetuate the myth that all of the Gaza is densely populated. They continue to perpetrate the myth that the vast majority of people killed in this was have been children and women, when the fact is the vast majority of people killed have been males of terrorist age,” Dershowitz said.

It is important for Americans and British readers to know that the worst kind of distortion is “distortion by omission, where the media refuses to print the truth or opposing points of view, and the rejection of this ad [by The Guardian] is a manifestation of that,” added Dershowitz.