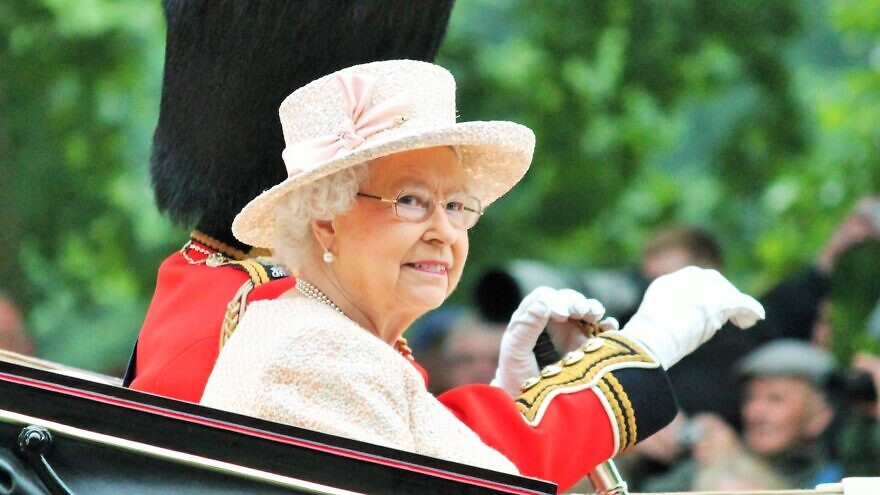 (September 9, 2022 / JNS) Jews around the world are reflecting on the consequential 70-year reign of Queen Elizabeth II following her death on Thursday and what she meant for the Jewish community.

Shortly after the news was announced, Britain’s Chief Rabbi Ephraim Mirvis released a video where he expressed condolences from the Jewish community throughout the Commonwealth.

Mirvis said that the queen embodied “the most noble values of British society” and was a “rock of stability” in an ever-changing world, and that she had a warm relationship with the Jewish community.

According to Mirvis, she was particularly committed to interfaith relations and Holocaust remembrance.

“I recall how on one occasion, she showed me and my wife items of Jewish interest and value in her private collection in Windsor Castle, including a Torah scroll rescued from Czechoslovakia during the Holocaust,” he said. “Her affection for the Jewish people ran deep, and her respect for our values was palpable.”

“The Jewish community is really in mourning along with the rest of the United Kingdom. We really feel that we have lost, I think someone described her as the grandmother of the nation,” Olivia Marks-Woldman, chief executive of the HMDT, said in an interview with JNS. “She’s been there all our lives—seven decades.”

The late Chief Rabbi Jonathan Sacks wrote about the Queen’s attendance at the 60th-anniversary commemoration of the liberation of Auschwitz in 2005, where she met with Holocaust survivors. While usually at the end of her appearances she is ushered away by her staff to adhere to her schedule, Elizabeth refused to leave. She remained, speaking individually to the large group of people. One of her attendants told Sacks that they had never seen her stay so long after a scheduled departure.

“She gave each survivor—it was a large group—her focused, unhurried attention. She stood with each until they had finished telling their personal story. It was an act of kindness that almost had me in tears,” wrote Sacks. “One after another, the survivors came to me in a kind of trance, saying: ‘Sixty years ago I did not know if I would be alive tomorrow, and here I am today talking to the queen.’ It brought a kind of blessed closure into deeply lacerated lives.”

‘A steadfast friend of the Jewish community’

Marks-Woldman said that the queen’s patronage was very significant both for the survivors and for the recognition of the Holocaust.

“You can imagine survivors who have been through the worst horrors and being persecuted to the point of attempted annihilation, and then for her majesty the queen to say, ‘I want to honor your work,’ means an enormous deal,” she said. “But it also sends a very, very important message to the non-Jewish world—and particularly at a time of Holocaust distortion and denial, which has been growing over the past many years—to have her majesty the queen say, ‘I think Holocaust commemoration and education is so vital that I will become a patron of this trust. I will attend the very first national commemoration.’ ”

As Elizabeth got older and was no longer able to attend as many functions, she stopped being a patron to so many charities and had her family take a bigger role. The patronage of the Holocaust Memorial Day Trust was transferred in 2015 to her son, now King Charles III, and in 2020, Prince William, Duke of Cambridge and his wife, Catherine, Duchess of Cambridge, attended the Holocaust Memorial Day ceremony.

Marks-Woldman said that many Holocaust survivors told her that the queen was the embodiment of the welcome they found in the United Kingdom with the possibilities and opportunities for them to rebuild their lives.

“I came to the U.K. as a child survivor of the Holocaust in 1947, and I remember the excitement surrounding the queen’s coronation,” Holocaust survivor Joan Salter said in a news release from the HMDT. “For someone who came from so much upheaval and trauma, the queen has been an important symbol of wisdom and stability for me. My thoughts are with King Charles III and his family at this difficult time.”

British-Israeli Michael Dickson, executive director of StandWithUs Israel, tweeted that the “Jewish citizens of the British Commonwealth will deeply mourn” the queen’s death.

“She was a steadfast friend of the Jewish community throughout the many decades of her reign,” he tweeted.

Dickson also noted in other tweets the Union Flag being displayed throughout Israel—land once administered by Britain—including on Tel Aviv’s City Hall and in the Old City of Jerusalem.

Still, her reign was not without controversy in the Jewish world.

A particularly sore point was that, despite her visits to many countries throughout her long reign, including Middle East and North African countries such as Egypt, Saudi Arabia, Qatar and Jordan, and countries with very poor human-rights records, she never visited Israel.

According to Aish.com, the queen caused concern with the British Jewish community during a visit to Jordan in 1984. Shown a map of Judea and Samaria (also known as the West Bank), which Israel took control of in the Six-Day War in 1967, the queen said it was depressing. She also described Israeli planes flying over the territory as “frightening.”

Her avoidance of Israel in her travels is believed to be at the behest of the British Foreign Office, according to The Jerusalem Post, which feared her visit could possibly spark a backlash from Britain’s Arab allies.

While King Charles has visited Israel on a few occasions unofficially and her late husband Prince Philip visited his mother’s grave on the Mount of Olives, the first official visit to Israel by a member of the royal family was made by Prince William in 2018.

She also conferred a knighthood on former president Shimon Peres in 2008. She conferred knighthoods on a number of prominent British Jews and raised former chief rabbis Immanuel Jakobovits and Sacks to the peerage, giving them noble titles.