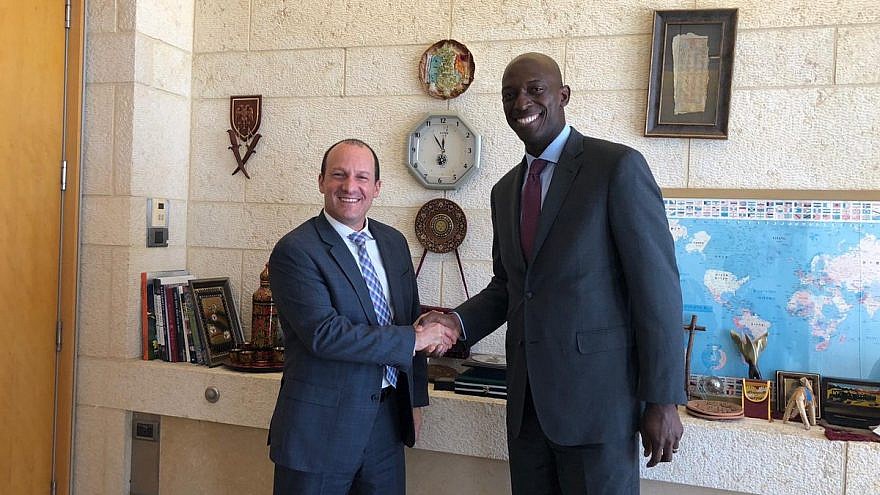 Days after forming an exploratory committee on March 13, Messam, 44, traveled to Israel for the first time.

He attended Florida State University, where he played wide receiver on the school’s football team, which won the NCAA Division I championship in 1993.

Messam and his wife, Angela, have three children.

JNS talked with Messam by phone on May 7. The interview has been edited for brevity and clarity.

Q: What’s your overall stance on the U.S.-Israel relationship, especially having been there recently?

A: My position is that obviously the United States and Israel have a very important and strategic relationship, Israel being our closest ally in the Middle East. It is imperative that our alliance remains strong for the national security of both countries, as well as for the region.

I had an opportunity to visit Israel a little over a month ago—to visit Tel Aviv and Jerusalem, but also a couple of sites in the Palestinian territories, including Ramallah and Hebron. What I saw that was pretty interesting was the fact that everyday Israelis, as well as the Palestinian people, are really for a two-state solution and there’s some expressed challenges in terms of action taking place. But it was a great experience visiting Israel.

Ended my evening with an incredibly moving experience at the Western Wall. pic.twitter.com/8y11aBGolj

Q: What was your reaction to the most recent rocket fire from Gaza towards Israel?

A: It’s the actions of the extreme fringes of the Muslim community that’s provoking these attacks. It’s an overall symptom of either forces not wanting peace or the lack of peace. It’s imperative that we work as a country in terms of the United States to being the honest broker to help facilitate that. It’s very important that the two sides actually sit down and get that progress that was basically decided ever since the Oslo Accords. It’s not only important for Israel; it’s also important for the Palestinian people as well to get to peace. I think the overwhelming majority on both sides want peace. They want to work towards a two-state solution. When you have the two sides [conducting] either violence or disruption towards that process, it does not do any of the relationship any good.

Q: Did you agree with the Trump administration’s statement condemning Hamas and reiterating Israel’s right to defend itself?

A: Of course, Israel has the right to defend itself. This is a very complicated situation. I think when we look at the loss of life due to military strikes, it’s just not being condoned or supported. And it does not work towards working to come to a two-state solution. I would support any action that brings peace. I support any action that brings the two parties together so we can ultimately find peace.

Q: You are the mayor of a city in a state with one of the highest Jewish populations of any state in America—the third-largest, in fact, after New York and California. Please describe your interactions with the Jewish community there and beyond.

Q: You have said that if elected, you would have the United States re-enter the 2015 Iran nuclear deal. Why re-enter a deal that gave $150 billion in sanctions relief to the world’s leading state sponsor of terrorism?

A: It’s difficult when you’re looking at a complex situation. That perspective comes more so because it’s multinational agreement to hold accountable Iran. Any entity that would support terrorism in the region, I think the United States should not be in a situation where we have an isolationist position when it comes to foreign policy when we can work in collaboration with allies to hold nations like Iran accountable. From a military, economic and trade standpoint, it facilitates a scenario that will lead to more stability to the region, as well as a group of allies working together to ensure the ultimate outcome will come to fruition. Any terrorist-sponsored activity will have consequences in response to those activities. In terms of my position, it’s more so from the standpoint of ensuring that we have a strong coalition of allies to hold nations like Iran accountable.

Q: If elected, would you move the U.S. embassy from Jerusalem back to Tel Aviv?

A: It’s something that has to be negotiated between Israel and Palestine. I don’t think it should be America’s position to put our thumbs on the scale in terms of what the two parties would decide among themselves. I don’t think it is America’s position to state where the capital should be, whether Tel Aviv or Jerusalem. What America should do is to work with both sides to help broker ultimate peace and an ultimate two-state solution with the two sides coming together and brokering that agreement.

Q: Just to clarify, you would move the embassy back?

A: I’m not saying that necessarily. What I’m saying is that there are decisions that will be made or have been made that will ultimately not allow a two-state solution. The two sides need to really come together to say, ‘OK, do we really want peace? Do we really want a two-state solution?’ I cannot speak for the Palestinian people. Would the Palestinian people negotiate in good faith if they disagree that the capital was moved from Tel Aviv to Jerusalem? I can’t answer that question. Only the two sides can work through that complex scenario.

Q: Would you undo the U.S. recognition of Israeli sovereignty over the Golan Heights?

A: I think it agitated the process. I view it in terms of the same situation as the move of the embassy to Jerusalem. The question is: How does this fare in terms of reaching a two-state solution? My understanding is that it was an executive order. It’s not honored by the United Nations or recognized by the international community. The question becomes, at the end of the day, that it’s important for America to maintain our strong alliance with Israel so we can achieve peace in the region.

Q: What is your stance on the Boycott Divestment and Sanctions movement against Israel?

A: These are all systematic symptoms of the lack of there being peace in a two-state solution. Perhaps I sound like a broken record, but at the end of the day, I don’t think it solves anything in terms of boycotts, in terms of making political statements. It’s more effort that’s used to getting the Palestinian Authority, along with the Israeli government, to the table to negotiate a finalized peace. I would, in a Messam administration, want to focus our attention and our efforts into getting the two parties together.

Q: What’s your reaction to the latest in anti-Semitism, including some of the anti-Israel verbiage coming from fellow Democrats Ilhan Omar and Rashida Tlaib? The president recently said that the Democratic Party has become an “anti-Jewish” and “anti-Israel” party?

A: I don’t get into political candor. I completely empathize with the Jewish community that may have interpreted her being anti-Semitic. Even in that situation, I think that some of her comments made have been taken out of context and have made her a target for her religion. That is what happens when there is not inclusion and acceptance on all sides. It gets caught up into the rhetoric of things, and we have to be a country where we can be able to speak to these issues. Of course, if the people of Israel and Jewish community are being offended and attacked, we should speak up against that.

Q: You mention inclusion. Would you apply that message especially in the aftermath of the Passover shooting at Chabad of Poway in Southern California?

A: Whoever was guilty of that should be prosecuted to the full extent of the law, just as if someone shot up a Muslim house of worship. I don’t think isolated incidents should prejudice an entire community. We prosecute those that break the law. Intolerance of any religious community is unacceptable in America.

Q: Is there anything else our readers should know about you?

A: My administration would be a friend of Israel and would have a high priority in stabilizing and achieving peace in the Middle East.