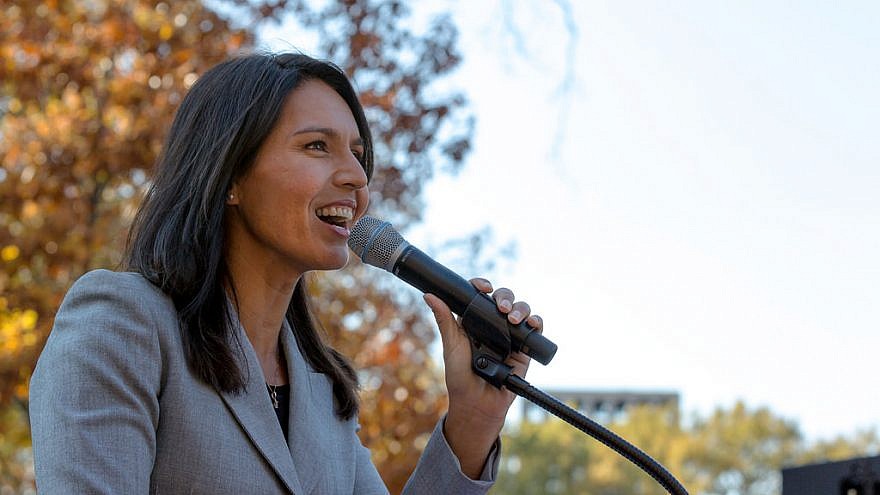 Serving in Congress since 2013, Gabbard’s record on Israel is, at best, mixed, though she has known to defend Syrian dictator Bashar Assad and Russian President Vladimir Putin, both associated with using chemical weapons on the Syrian people, and for aligning themselves with Iran and its proxies, such as the U.S.-designated terrorist group Hezbollah.

Gabbard met Assad in Syria in January 2017 to the dismay of her fellow lawmakers.

“Sitting high above his torture cells in Damascus, Assad is giddily crafting his wish list for the Tulsi campaign,” tweeted Rep. Adam Kinzinger (R-Ill.), a frequent critic of Gabbard.

Sitting high above his torture cells in Damascus, Assad is giddily crafting his wish list for the Tulsi campaign. https://t.co/oHZ2Gsbcti

Gabbard supported the 2015 Iran nuclear deal and voted for it, she said, “not because it’s a great deal or even a good deal. I voted for it because I could not find a better alternative.”

At the annual Christians United for Israel summit in Washington that year, she said: “It’s easy to say that there’s no trust between our two countries (the U.S. and Iran), but without that mechanism for verification, then any potential agreement really becomes a joke,” mentioning that sanctions relief “must be tied to Iran’s compliance to the deal.”

The following year, the Hawaii congresswoman was honored in 2016 by popular commentator Rabbi Shmuley Boteach for being “a strong advocate for national defense and for veterans.”

Although she was not one of nearly 60 Democrats who boycotted Israeli Prime Minister Benjamin Netanyahu’s March 2015 address to a joint session of Congress, warning about the prospects of a nuclear Iran, Gabbard said: “It’s unfortunate that an issue as important as preventing Iran from obtaining nuclear weapons has been muddled by partisan politics. This is an extremely serious issue, at a critical juncture, that should not be used as a political football.”

She continued that the U.S.-Israel relationship “must rise above the political fray, as America continues to stand with Israel as her strongest ally.”

“I know how important our enduring alliance with Israel is,” she said. “My vote upholds my commitment to maintaining and strengthening this alliance, as well as my long-held position that the most viable path to peace between Israel and Palestine can be found through both sides negotiating a two-state solution. While I remain concerned about aspects of the U.N. resolution, I share the Obama administration’s reservation about the harmful impact Israeli settlement activity has on the prospects for peace.”

She slammed U.S. President Donald Trump for withdrawing America from the 2015 Iran nuclear deal in May 2018.

“President Trump’s decision to withdraw from the Iran nuclear deal dangerously increases the likelihood of war and undermines approaching talks with Kim Jong-un to denuclearize North Korea,” she said. “While the Iran deal is far from perfect, Iran is in compliance and the deal is working by preventing Iran from acquiring a nuclear weapon and preventing an all-out war. The concerns regarding other issues like Iran’s missile program should be addressed outside of the existing nuclear deal.”

She continued, “Breaking this commitment that the U.S. made to Iran and our allies will likely push Iran to restart its nuclear-weapons program, increase the potential of war and undermine critical negotiations to denuclearize North Korea—a country that already has nuclear weapons that threaten Hawaii and the United States.”

“This short-sighted decision ruins already damaged U.S. global credibility, proving that the U.S. cannot be trusted to keep its promises,” she added.

In May 2018, she criticized Israel defending itself against Hamas-inspired riots along the Gaza fence: “Israel needs to stop using live ammunition in its response to unarmed protesters in Gaza. It has resulted in over 50 dead and thousands seriously wounded.”

Israel needs to stop using live ammunition in its response to unarmed protesters in Gaza. It has resulted in over 50 dead and thousands seriously wounded.

Whether Gabbard will change or stick with her viewpoints on the campaign trail is to be determined. She is projected to be a dark horse in the presidential race.