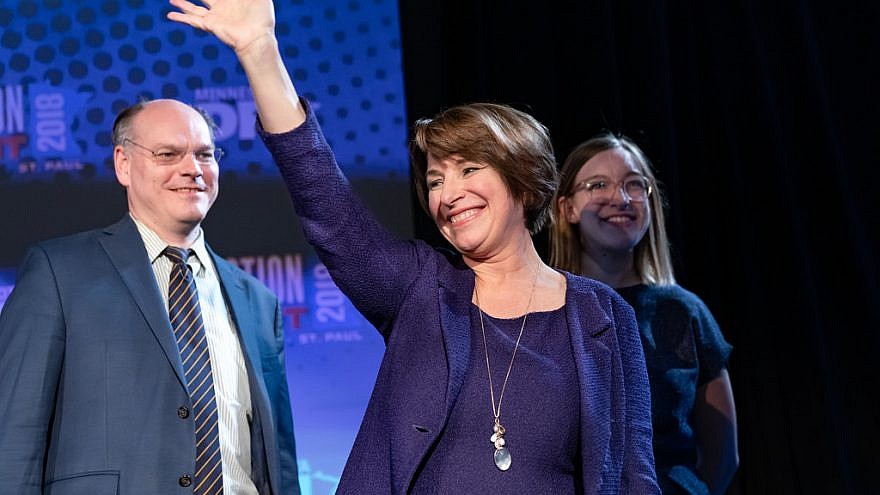 (February 11, 2019 / JNS) Minnesota Sen. Amy Klobuchar put her hat into the ring in announcement on Sunday as part of a growing list of Democratic candidates running in the 2020 presidential race.

Since being elected to the Senate in 2006, she has been “a consistent supporter of the U.S.-Israel relationship,” said award-winning journalist Claire Shipman at the 2018 American Israel Public Affairs Committee Policy Conference. Prior to entering the upper chamber, she served as the Hennepin Country Attorney in her home state.

At the conference, Klobuchar, 58, said in response to how the U.S.-Israel relationship can remain bipartisan despite today’s hyper-partisanship: “A lot depends on the Jewish community in America because I believe that you can find common ground while still standing your ground. That has been really a hallmark of all I have worked in Congress, and we have seen this in Congress with support for Israel, whether it is Iron Dome, whether it is David’s Sling, whether it is the Iran sanctions in the 98-2 vote out of the United States Senate, or whether it is the Memorandum of Understanding and the $38 billion, largest amount ever put into Israel security.

“At the same time, as you know, things have become very polarized,” she continued. “And so the way I would suggest—and your leaders know this and you know this better than anyone—to try to do everything and stop people from injecting partisanship into the Israeli-American relationship, and push back. If you’re a Republican, reach out to Democrats; if you’re a Democrat, reach out to Republicans.”

While Klobuchar has mostly stood along partisan lines on issues such as supporting the 2015 Iran nuclear deal, she has shown a willingness to break from her own party, including on matters related to the U.S.-Israel alliance.

Klobuchar was the only 2020 candidate to break from her Senate colleagues who are running for the White House and voted in favor last week of the bipartisan Strengthening America’s Security in the Middle East Act, which would impose fresh sanctions on Syria, boost security cooperation with Israel and Jordan, and allow state and local governments the right to punish state or local contractors from engaging in boycotting Israel. It also included an amendment that warned against a “precipitous withdrawal” of U.S. troops from Syria or Afghanistan.

A component of the legislation, the Combating BDS Act has sparked opposition from Democrats and the American Civil Liberties Union, which has said that it would violate the First Amendment. New York Sen. Kirsten Gillibrand and Massachusetts Sen. Elizabeth Warren, both Democrats running in 2020, have also expressed opposition, citing the ACLU’s concerns.

“As staunch allies of Israel, we must also ensure that harmful movements, like the resurgence in anti-Semitism and the Boycott Divestment and Sanctions (BDS) Movement are not successful,” said Klobuchar on her Senate website. “The BDS movement undermines a two-state solution, and is counterproductive to both Israelis and Palestinians.”

Despite her desire to maintaining Israel’s security, coupled with flaws associated with the 2015 Joint Comprehensive Plan of Action, or JCPOA, Klobuchar supported the nuclear deal.

Announcing her stance, Klobuchar said that it was “our best available option to put the brakes on Iran’s development of a nuclear weapon.”

“I do this with my eyes wide open to the nature of the Iranian regime, including its human-rights abuses, its unjustified detention of American citizens, its threats against Israel, and its destabilizing actions in the region, including its support for terrorist groups,” she said.

“After a lot of thought and discussion, I have concluded that an Iran in possession of a nuclear weapon would make an already volatile situation much worse by greatly increasing the danger to Israel and our other allies in the Mideast,” she continued. “If we were to reject this agreement, Iran would be able to continue all of its destabilizing activities while continuing its pursuit of the most destructive weapon in the world.”

Along with giving “deep respect for those who hold different views on this subject and acknowledge that this was a difficult decision,” in her announcement with her viewpoint on the deal, Klobuchar listed reasons behind supporting it: “It curbs Iran’s ability to develop a nuclear weapon”; “sanctions can be reimposed, and the military option remains on the table”; “rejecting the agreement would lead to a splintering of the international partnership that has been critical to preventing Iran from obtaining a nuclear weapon”; and “this agreement will move in parallel with increased commitments to security assistance for Israel and our other allies in the region.”

Unsurprisingly, Klobuchar opposed U.S. President Donald Trump withdrawing the United States from it in May 2018.

“We cannot allow Iran to obtain nuclear weapons, and as we head into negotiations on North Korea’s nuclear weapons, we cannot be backing away from international agreements and nuclear inspections,” she said. “I also believe we should be negotiating a more comprehensive agreement moving forward that includes Iran’s ballistic-missile tests and destabilizing activity that pose a direct threat to Israel, which we can do without withdrawing from the agreement.”

On Syria: Concerned ‘for the security of our allies and innocent civilians’

“I am deeply concerned that prematurely withdrawing American troops from Syria is contrary to the advice of senior national security officials and that the president’s announcement will have negative consequences for our country’s national security interests,” she said. “I am also concerned about the implications of U.S. withdrawal for the security of our allies and for innocent civilians in Syria.”

“These concerns are shared by our key allies, including Israel and Jordan. The withdrawal of U.S. troops will also abandon the Kurds, who have been our partners in the region,” she added. “Once again, we see the U.S. abandoning critical alliances in favor of narrow and ill-defined aims.”

As demonstrated over the past couple years, Klobuchar has called out anti-Semitism at home and at the United Nations.

In January 2017, Klobuchar was a co-sponsor of a Senate resolution to rebuke U.N. Security Council Resolution 2334.

A few months later, she signed onto a letter to U.N. Secretary General António Guterres, calling for the end of the world body’s animosity towards the Jewish state.

In the United States, in the aftermath of the Pittsburgh synagogue shooting in October 2018, Klobuchar tweeted: “We stand with the people of Pittsburgh and the members of the Tree of Life Synagogue, and stand against hate, anti-Semitism, and senseless gun violence. We must not tolerate this.”

We stand with the people of Pittsburgh and the members of the Tree of Life Synagogue, and stand against hate, anti-Semitism, and senseless gun violence. We must not tolerate this.

As a Midwestern legislator who has, through her deliberate, thoughtful demeanor, called for bipartisanship, Klobuchar enters the crowded Democratic field as a candidate who could surprise the electorate.