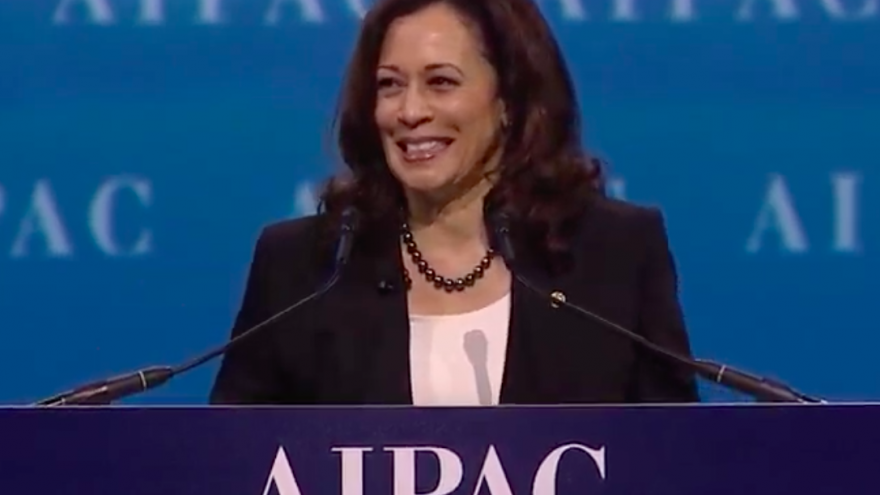 (January 21, 2019 / JNS) Democratic California Sen. Kamala Harris announced on Monday that she is entering the 2020 race for president.

Since being elected to replace fellow longtime Democratic Sen. Barbara Boxer, Harris’s record related to the Jewish community and Israel—from the 2015 Iran nuclear deal to anti-Israel bias at the United Nations—has largely reflected the mainstream positions of the Democratic Party.

Harris, who represents the second-most populous Jewish state in the United States, voted against the nomination of David Friedman in March 2017 to be U.S. ambassador to Israel.

“I am deeply concerned that David Friedman—President Trump’s nominee to serve as U.S. Ambassador to Israel and his former bankruptcy lawyer—lacks the qualifications, experience, and credibility to serve as an effective diplomat in one of the most challenging and important posts in the world,” she said in a statement. “In his writings and statements, Friedman has insulted, vilified and smeared broad swaths of Americans whose political views differ from his own, including using Holocaust references to equate some Americans with Nazi sympathizers.”

“Moreover, Friedman’s stated opposition to a two-state solution contradicts long-standing U.S. policy that is supported by the majority of my constituents and the American people. Despite his efforts to walk back his offensive and radical statements at his confirmation hearing, it is nearly impossible to believe his statements do not represent his true beliefs,” she continued. “As Maya Angelou wisely said, ‘When someone shows you who they are believe them; the first time.’ ”

Personal connection to Judaism and Israel

Just days after voting against Friedman’s nomination, Harris addressed the annual American Israel Public Affairs Committee Policy Conference, where she talked about growing up in the Bay Area, where she collected donations for the Jewish National Fund.

Additionally, Harris married her husband, Jewish lawyer Douglas Emhoff, in 2014 included the ceremonial smashing of the glass to remember the suffering the Jewish people have endured throughout history.

At her AIPAC address in 2017, she stressed her support for a two-state solution to the Israeli-Palestinian conflict.

“I believe that the only viable resolution to the Israeli-Palestinian conflict is two states for two people living side by side in peace and security,” she said. “I believe that a resolution to this conflict cannot be imposed. It must be agreed upon by the parties themselves. Peace can only come through a reconciliation of differences, and that can only happen at the negotiating table. I believe that when any organization delegitimizes Israel, we must stand up and speak out for Israel to be treated equally. That is why the first resolution I co-sponsored as a United States senator was to combat anti-Israel bias at the United Nations and reaffirm that the United States seeks a just, secure and sustainable two-state solution.”

She also addressed anti-Semitism in America, saying “as someone who’s personally prosecuted hate crime, I also believe that we cannot stand by while anti-Semitism, hate crime and bigotry are on the rise, whether that’s a swastika on a Jewish family and children’s services bus in San Francisco or the burning of a mosque in Tampa. That’s why I am pleased to announce for the first time here at AIPAC that I’m introducing a senate resolution that condemns targeting of Jews, as well as any form of religious bias, racism, misogyny or other hateful acts targeting minorities across the United States.”

Indeed, Harris was a co-sponsor of a Senate resolution to rebuke U.N. Security Council Resolution 2334.

In April 2017, Harris signed onto a letter to U.N. Secretary General António Guterres, calling for the end of the world body’s animosity towards the Jewish state.

At the AIPAC conference, she also said, “I believe Israel should never be a partisan issue, and as long as I’m a United States senator, I will do everything in my power to ensure broad and bipartisan support for Israel’s security and right to self-defense.” 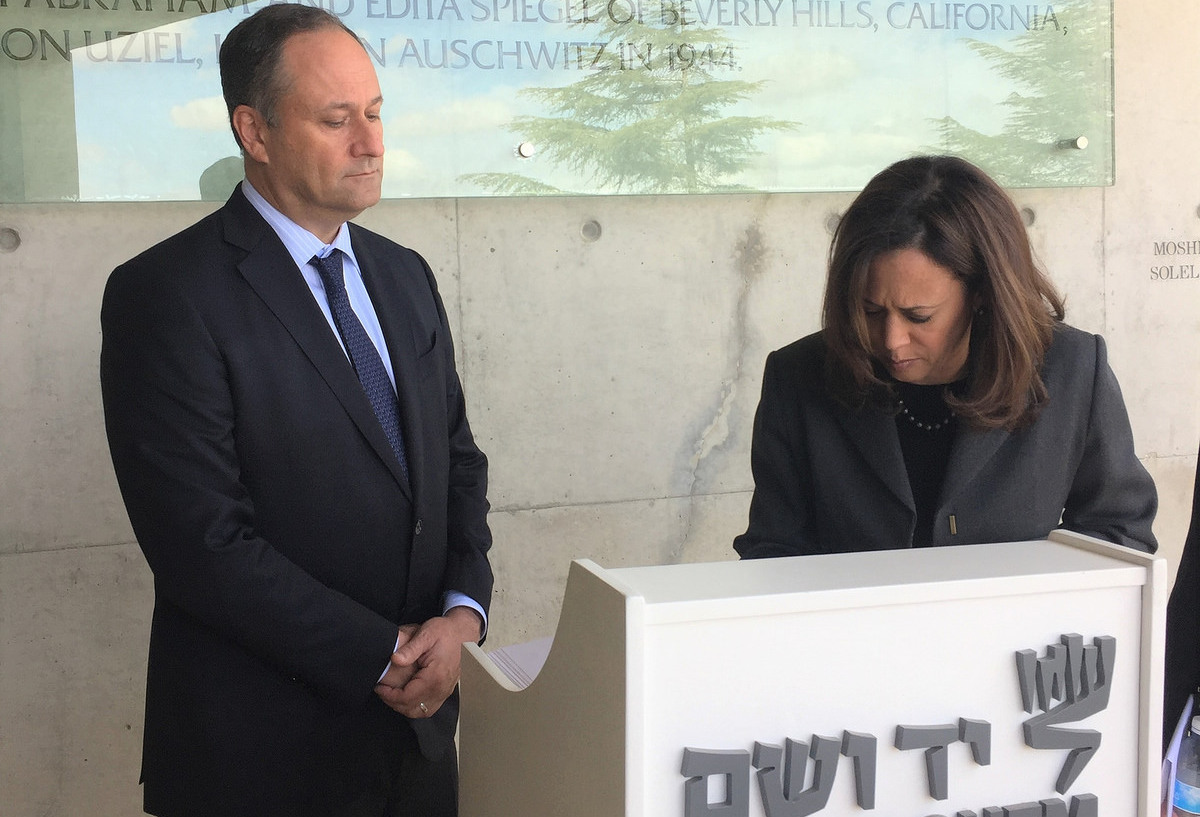 In late 2017, Harris traveled to Israel, where she met with Prime Minister Benjamin Netanyahu to discuss numerous issues regarding “deepening cooperation” between the United States and Israel. She also toured the country, including visiting its supreme court and the Yad Vashem Holocaust memorial and museum in Jerusalem.

Today I met with Senator @KamalaHarris of California. We discussed the potential for deepening cooperation in water management, agriculture, cyber security, and more. I expressed my deep appreciation for America’s commitment to Israel’s security. pic.twitter.com/L5qdcgwWG0

Earlier this year, Harris, like many Democrats, slammed Trump’s decision to withdraw the U.S. in May 2018 from the 2015 Iran nuclear deal: “[The] decision to violate the Iran nuclear deal jeopardizes our national security and isolates us from our closest allies. This nuclear deal is not perfect, but it is certainly the best existing tool we have to prevent Iran from developing nuclear weapons and avoid a disastrous military conflict in the Middle East.”

“As the international community and the Administration’s own national security team has confirmed multiple times, Iran remains in compliance with the deal. In the absence of an Iranian violation, it is reckless to break this agreement without presenting any plan on how to move forward,” she continued. “Instead of establishing a comprehensive, strategic national security policy, this Administration is far too focused on scoring political points.”

In the aftermath of the October 2018 shooting at the Tree of Life*Or L’Simcha Synagogue in Pittsburgh that killed 11 people, the deadliest attack in American Jewish history, Harris called for gun control.

“It’s been 12 days since the mass shooting at Tree of Life Synagogue and a few hours since Thousand Oaks. No one should have to live in fear that their community will be the next one struck by gun violence. This isn’t normal. Congress’ inaction is costing lives,” she tweeted.

It’s been 12 days since the mass shooting at Tree of Life Synagogue and a few hours since Thousand Oaks. No one should have to live in fear that their community will be the next one struck by gun violence. This isn’t normal. Congress’ inaction is costing lives. #GunControlNow

Nonetheless, she has made combating hate crimes a top priority since serving as San Francisco District Attorney. She reported in 2012 that acts specifically targeting Jews were the most commonplace religion-related hate crime.

In April 2017, she successfully introduced and got unanimously passed a nonbinding Senate resolution that condemned hate crimes, in addition to calling for “the development of an interagency task force led by the Attorney General to collaborate on the development of effective strategies and efforts to detect and deter hate crime in order to protect minority communities.”

Despite her legal credentials and growing political stature, Harris enters the presidential race with long odds in a crowded field, and it remains to be seen if her appeal can stretch beyond the progressive community.