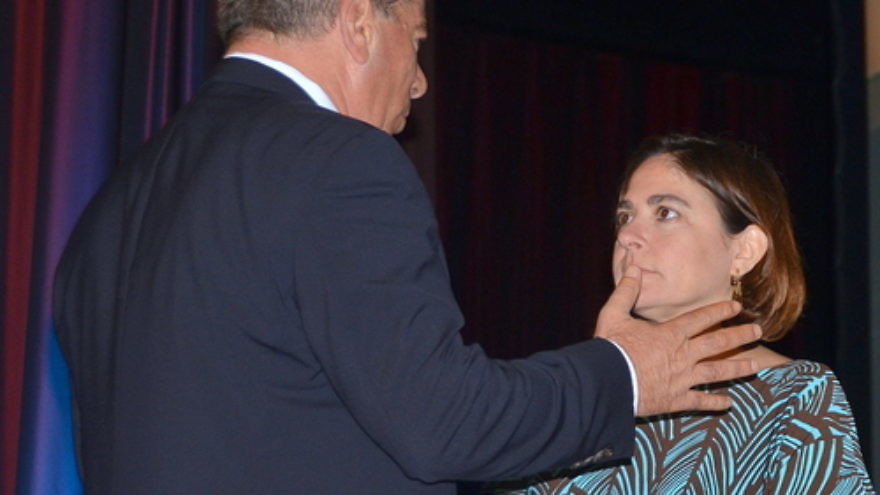 (June 9, 2015 / JNS) “Israel is the most embattled democracy on earth. And what a democracy it is—robust and rollicking, with an often rancorous parliament,” Prime Minister Benjamin Netanyahu said via video feed on June 7, addressing a crowd of 1,500 people at the Jerusalem Post newspaper’s annual conference in New York City. “I can give you personal testimony: a thoroughly independent judiciary—it will stay that way; a free press—it will stay that way; a democracy that rigorously protects the equal rights of all its citizens without exception.”

Indeed, “rollicking” is one way to depict the three-ring circus that performed at the Jerusalem Post event, held at the Marriott Marquis Hotel in New York’s Times Square.

When World Jewish Congress President Ronald S. Lauder took the stage, he encouraged Jewish unity and mutual respect. “All Jews want a safe and secure Israel. … If we disagree in how we get there, let’s do it in private. In public let’s speak with one voice,” he said.

Less than one hour later, a panel on Iran went in the complete opposite direction.

Discussing the challenges of the framework nuclear deal reached in April, the panelists—former Mossad chief Meir Dagan, former IDF chief of staff Lt.-Gen. (res.) Gabi Ashkenazi, former IDF deputy chief of staff Maj.-Gen. (res.) Uzi Dayan, and Jerusalem Post Senior Contributing Editor Caroline Glick—all agreed there was cause for grave concern over the Iranian threat. But when Glick charged that Dagan and Ashkenazi’s prevention of a military strike on Iran in 2010, in defiance of the prime minister’s orders, is what led to the current situation in which Iran is on the verge of getting a nuclear bomb, the stage became a boxing ring.

“In 2010, according to a report from 2012 on the Israeli news program ‘Uvda,’ we learned that two of the gentlemen on this panel were given an order to prepare the military for an imminent strike against Iran’s military installations and they refused,” Glick told the crowd, with a finger pointed at Dagan and Ashkenazi.

“Because it was an illegal order,” Dagan interrupted. “We were always willing to obey any legal order by the prime minister.”

“You were ordered by the security cabinet,” Glick said.

“You were not there, you don’t know what happened there,” Dagan answered.

“Had you not brought in your expert legal opinion to determine whether or not the prime minister of Israel and the defense minister of Israel have a right to order Israel to take action in its national defense, then we would not be where we are today,” Glick charged. “We would not be faced with a situation where no international coalition will be built. Where now we are seeing the United States moving forward at the end of the month to conclude a nuclear agreement with Tehran that will enable them to acquire the bomb. We would be in a different position.”

Ashkenazi then called out, “It is stupid to say what you just said, and above all it is wrong.”

“That is not how it played out in the media,” Glick pushed.

“There was never a decision about it,” Ashkenazi nearly begged, acknowledging that he recommended against a unilateral Israeli strike on Iran at the time.

It was one of many such debates during the conference that kept members of the crowd on the edge of their seats, applauding and booing in turn. Gil Hoffman, chief political correspondent and analyst for the Jerusalem Post, called that kind of action “part of the fun.”

“What the J Post conferences have done in the past is enabled the politicians to air their dirty laundry in front of a very different audience that is not used to seeing politicians act so disrespectfully,” Hoffman said.

“On the one hand it’s problematic; there are those that will say fighting for the world to see is wrong,” he continued. “On the other hand, showcasing Israeli democracy is what makes Israel look good.”

Hoffman, who has been covering Israeli politics for 15 years on behalf of the newspaper, admitted, “It is a circus we bring to town.”

The display is one that highlights how passionate Israel’s leaders are about a country that at only 67 years old “is a work in progress, whose fate is constantly being pondered. … We are fighting here over the future of our country,” said Hoffman.

In remarks at the conference’s conclusion, Glick was upbeat about that future.

“Our coalition building may look yucky, but if it falls, there will always be another one,” she said. “You can trust us (the Jerusalem Post) to bring our roadshow to New York every year.”