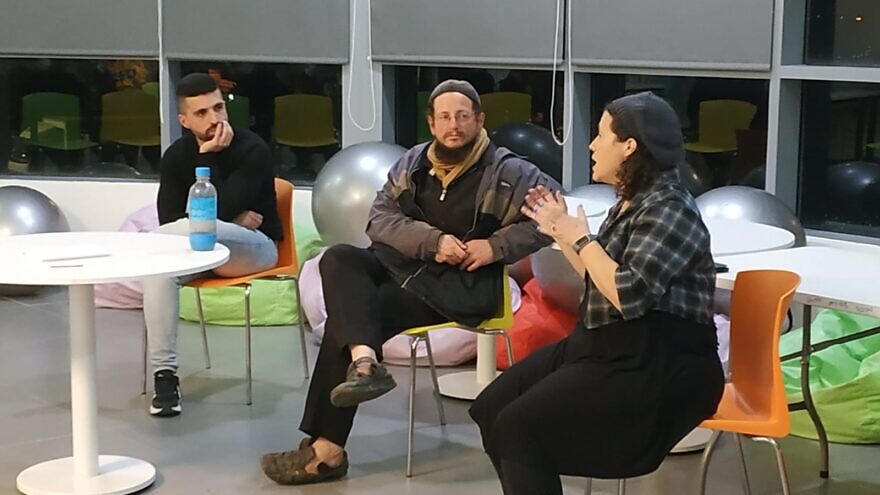 Presenters Natalie Zacks, Yoel Silver and Noor A'wad speak as part of an event organized by Roots, an organization officially founded in 2014 to foster dialogue between Palestinians and Jews living in the West Bank/Judea and Samaria. Photo by Orit Arfa.
Republish this article
1089 WORDS
Spread the word.
Help JNS grow!
Share now:

(February 16, 2022 / JNS) In recent weeks, the hills of Samaria have been headline-making flashpoints in the Israeli-Palestinian conflict.

On Jan. 24, local residents stoned Palestinian cars and businesses, injuring three, in the roadside town of Huwara, awakening outrage over “settler violence.” On Feb. 8 in Nablus (Shechem), the Israeli army shot and killed in broad daylight three Palestinians wanted by Israel for terrorist activity. But the very next day, at a community center in the city of Ariel, a Palestinian “shot” at Israelis—with words meant to create peace, no matter how hard they were for some to hear.

In a presentation organized by Roots (“Shorashim” in Hebrew), an organization officially founded in 2014 to foster dialogue between Palestinians and Jews living in the West Bank/Judea and Samaria, the group’s official speaker Noor A’wad shared his tale of how he went from denying and hating Israelis to empathizing with and recognizing their side of the story. Sporting a faux Western look with black Adidas sneakers and stone-washed jeans, A’wad explained how his grandparents were forced to flee their home in Malha, a neighborhood in Jerusalem, during the 1948 War of Independence to eventually settle in Bethlehem, where A’wad experienced the Second Intifada from 2000 to 2005 as a young adult.

“I thought this must end by resistance. Unfortunately—and I can say, unfortunately—that was referring to a violent resistance. They have an army fighting us; we’re weak,” A’wad, 30, said in an Arabic accent over the sound of the rain hitting windows offering a panoramic view of the Samarian hills. It was a talk he’s given before, but this was his first event in Ariel. About two dozen Jewish people attended—some religious, some secular, some from the region and some from the Tel Aviv area.

It was only until a chance encounter with Roots’ director of international relations, Rabbi Hanan Schlesinger of Alon Shvut in Gush Etzion, that he began to see Israelis as more than “soldiers” and “settlers” as not just “land-robbers.” As a tour guide, he was asked to take his group to a Roots event. Here, his resistance was intellectual. After hearing Schlesinger announce that he was a proud Zionist, Jew and settler, he found himself impressed by his connection to his identity but was tempted to leave the group, in anticipation of anti-Palestinian rhetoric.

“It was difficult for me to listen to Hanan’s words, but then at some point, he talked about his process of realizing there are Palestinians around, and he needs to know more about them. … Rabbi Hanan said that at the end of this day, his mission is to include more than one truth and put many truths in one heart,” said A’wad.

At that point, he felt “seen.” But he has not changed his overarching view that he lives under a violent “occupation,” a term often rejected by right-wing settlers. 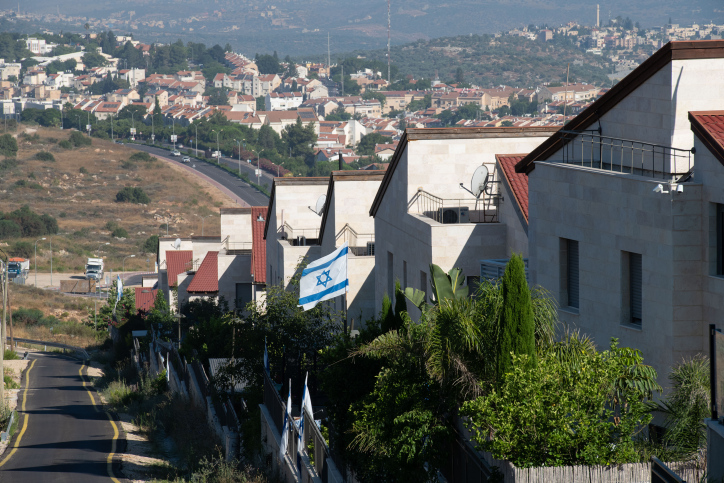 The city of Ariel in Judea and Samaria in July 2020. Photo by Sraya Diamant/Flash90.

‘Each of us has our own narratives’

Yoel Silver, 35, of Karnei Shomron, provided a Jewish counterpoint. He became interested in finding more about his “cousins” when he noticed that Jews hardly interact with Arabs constructing homes in Israeli cities. In his own effort to get to know them, he drove through a Palestinian village and by chance was invited to some home hospitality. With a scraggly beard and a velvet kippah, his bare feet dangling over his sandals, Silver looks the part of a “settler.” But he’s intent on breaking stereotypes that “settlers” hate Arabs. He believes that they can and should live there together. At the same time, he would support financial incentives for Palestinians who want to emigrate.

“Sitting out in the field and having coffee with them, you open up and realize that they are really warm people,” he said in a perfect English that comes from growing up in a Connecticut town ironically named “Palestine” in a 19th century in homage to the pre-state Jewish homeland. “It helped me realize there is a way to make a future. Each of us has our own narratives, but we don’t even want to give the other narrative the time of day.”

These two narratives intersected in the Q&A, with A’wad and the Jewish attendees interchanging terms like the West Bank, and Judea and Samaria, the War of Independence and the nakba (the Arabic characterization of the war, meaning “catastrophe” or “disaster.”)

This particular event was organized by a Roots volunteer and Ariel resident, Natalie Zacks, an immigrant who moved to Israel in 2008 from Detroit. She got involved following coronavirus lockdowns when, while shuttered inside, she became friendly with Palestinian workers renovating her home.

“Getting to know each other and seeing each other as human beings—with families, with lives—it was eye-opening to me,” Zacks told the crowd. 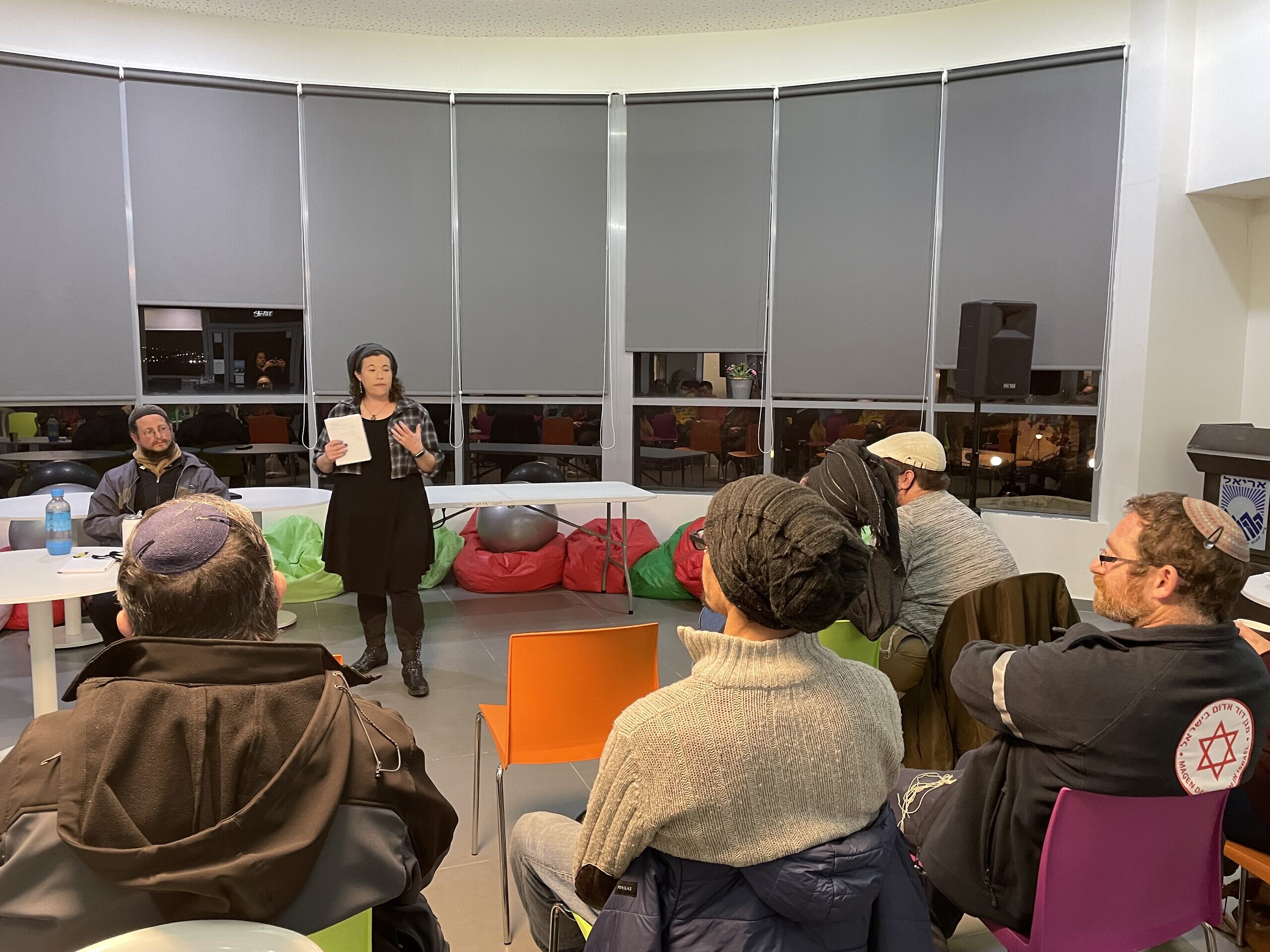 Natalie Zacks, who moved to Israel in 2008 from Detroit. Photo by Orit Arfa.

‘Come as you are’

Roots is headquartered in the Gush Etzion settlement bloc on land owned by the Palestinian co-founder, Khaled Abu Awwad, a member of a well-known Palestinian clan whose status and connections apparently give it reprieve from punishment for breaking the Palestinian law of normalizing relationships with Israelis.

Zacks is intent on creating a branch based in Ariel for the Samarians. A “cafe night” this month, however, is now in jeopardy as local Palestinians are nervous to attend after the tension-raising Nablus shooting. Zacks feels this is exactly the time to talk. What attracted her to Roots is its encouragement of uncensored dialogue.

“I want people to come with their beliefs,” she said. “I don’t want them to have to change who they are or think that they don’t have to be Zionist or too Jewish. Come as you are.”

Zacks has encountered her share of naysayers and skeptics, but A’wad has taken personal risks. For his work with Roots, he said, some friends “canceled” him, some joined him, and some are simply disinterested. What they share is distrust of the Palestinian Authority’s interest in the people.

A natural question that comes up in the Q&A sessions is: What is the political solution?

A’wad said Roots doesn’t advance any one thing but thinks that it must involve joint discourse and reconciliation. He is attracted by a “land for all” model that promotes a two-state confederation.

Zacks and Silver reject “settler violence” and believe the perpetrators belong to a fringe group. Zacks said she would be happy to invite them to a Roots meeting in the contentious hills.

“Normally, we think of war breaking out,” said Silver. “But there can also be peace breaking out.”