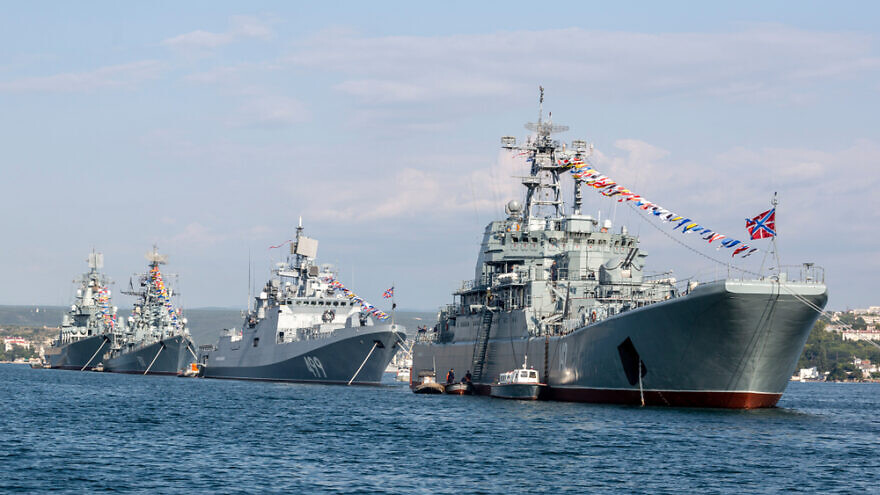 (February 25, 2022 / JNS) Russia could be preparing an option to challenge the West and NATO in the Mediterranean and Middle East as a means of opening a new global hotspot, former Israeli Ambassador to Russia and Ukraine Zvi Magen has told JNS.

Magen noted a large-scale naval and air exercise held by the Russian military in the eastern Mediterranean in recent days, which saw long-range nuclear-capable bombers and fighter jets carrying hypersonic missiles Russia’s Hmeimim airbase in Syria for massive naval drills in the region amid soaring tensions with the West, according to a report last week by Military Times.

“They are in the Mediterranean training and this could form a challenge for NATO’s underbelly. This creates all kinds of problems and a new front against the West in the Middle East,” said Magen, who also served in Israel Defense Forces Military Intelligence, and is a senior research fellow at the Institute for National Security Studies in Tel Aviv. “Russia could be preparing an option for regional activity beyond eastern Europe.”

Regarding Israel’s maneuvering options in the face of the Russian invasion of Ukraine, Magen described Jerusalem’s situation as a “very difficult challenge.”

“On the one side, Israel is a partner of the West and the United States, and it identifies with Western objections to what is happening in Ukraine. On the other hand, Israel is the only country in the world that has a Russian challenge in the form of direct contact with the Russian military on its border with Syria,” he stated.

Over the years, Israel and Russia found a “common language” in Syria’s skies, enabling neutral mutual activity towards one another, and a mutual refraining for interfering in one another’s activities. Russia “did not intervene in our areas and we did not intervene in its operations in Syria and between Russia and its neighbors,” Magen recalled.

Russia’s Ambassador to the United Nations Dmitry Polansiy on Wednesday released a statement saying, “We’re concerned over Tel Aviv’s announced plans for expanding settlement activity in the occupied Golan Heights, which contradicts the provisions of the 1949 Geneva Convention. Russia doesn’t recognize Israel’s sovereignty over Golan Heights that are part of Syria.”

Magen described that statement as “different” from past Russian criticism.

“Israel did state its objections to the Ukraine war, and it did so cautiously, while not going further. If, however, Russia continues in its new critical rhetorical position to Israel, Israel will be more free to criticize Russian interests at the rhetorical level,” said Magen. “But Israel is in constant contact with the Russian military, so the strategic calculations are complex.”

Danny Ayalon, former Israeli Ambassador to the U.S. and a senior research fellow at the Miryam Institute, told JNS that diplomacy has, since ancient times to the modern era, always had to navigate the tensions between “values and interests.” He added that ultimately, “interests always win. Here too, due to the importance of Russia regarding our activity against Iran and Shi’ite militias, our interest is to safeguard keeping relations with Russia on their good side.”

On the other hand, Ayalon added, Israel is “not a superpower and it does not have to express its stance on everything. Even if we speak, it would not help. There are bigger states in the world that have not spoken. Israel can issue a minor, proportional statement that says we hope for a rapid ceasefire, and that we are working for the safety of civilians, principally Jews and Israelis in Ukraine.”

Ayalon said that the statement by Israel’s Foreign Ministry on Wednesday was proportional in that regard. The Foreign Ministry had said, “Israel shares the concern of the international community regarding the steps taken in eastern Ukraine and the serious escalation in the situation. Israel hopes for a diplomatic solution which will lead to calm, and is willing to help if asked. Israel supports the territorial integrity and the sovereignty of Ukraine.”

Yet a statement made by Foreign Minister Yair Lapid on Thursday carried a significantly harsher tone, saying at a press conference that Russia’s attack is “a serious violation of the international order.”

“Israel condemns that attack and is ready and prepared to offer humanitarian assistance to Ukrainian citizens,” said Lapid.

Ayalon noted however that not many foreign ministers directly commented on the crisis at press conferences around the world.

The Russian criticism of Israel’s presence in the Golan, Ayalon said, is “more than a hint” for Israel, and is likely to end the diplomatic tit for tat between the two countries.