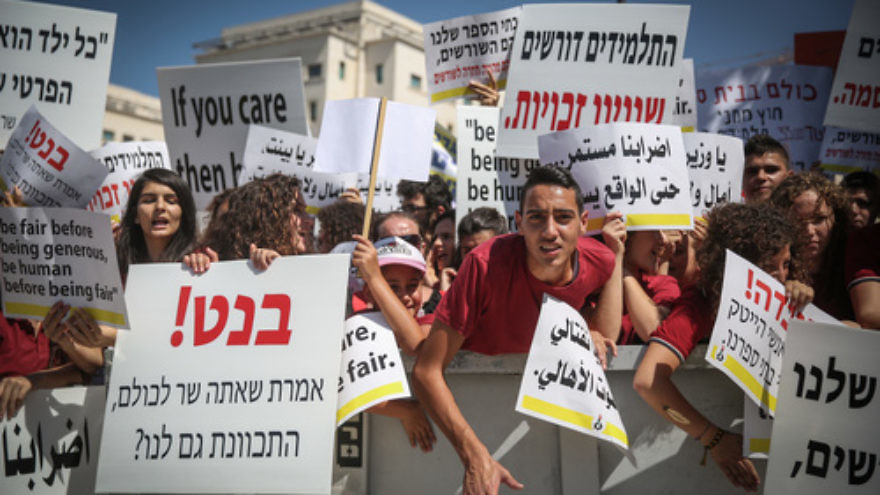 While much attention has been paid to the recent high-profile United States visit of Pope Francis, Israel’s Catholic community finds itself represented by leaders who are increasingly seeking to redefine the meaning of “pro-Israel,” begging the question of whether or not Israeli Catholic laypeople will ultimately side with the pro-Palestinian tone of the Vatican’s local representatives (vicars) in the Jewish state.

Notably, the Israeli vicars are taking direction from a Pope Francis-led Vatican that officially recognized Palestinian statehood earlier this year.

The Holy Land Coordination group—made up of bishops from Europe and North America—stated in 2012, “We have heard and we make this conviction our own: to be pro-Israel has to mean being pro-Palestinian. This means being pro-justice for all, whose certain fruit is lasting peace.” The bishops meet every year to pray, and they support the local Catholic church in Israel.

The latest point of tension indicating a strong pro-Palestinian voice within Israel’s Catholic leadership came from a recently ended protest in Christian schools. A total of 33,000 Christian students in Israel missed school from Sept. 1-27 due to an organized strike by staffers protesting a huge cut in funding.

Strikers alleged discrimination, injustice, and lack of acceptance by Israel, particularly in regards to vying for equal rights for Arab citizens, both Christian and Muslim. Among the 47 schools on strike, 40 of them were Catholic, with about 60 percent of the students being Christian and 40 percent Muslim. Since the schools are open to all Israelis and most are Arabic-speaking schools, Muslim pupils of Christian school are usually taught their own religious curriculum.

The Christian schools have a “recognized” but “unofficial” status in Israel, meaning they are not state-run schools yet still qualify for 75 percent funding from Israel’s state education budget. Two years ago, Christian schools received 65 percent of their budgets from government subsidies, but that figure is now only 29 percent, creating a funding shortfall.

Israeli Minister of Education Naftali Bennett has stated that Israel has no discriminatory policies and that the state’s goal is to ensure that public school funds are not exhausted by needing to give too much funding to private schools.

Father David Neuhaus—patriarchal vicar of Saint James Vicariate, Israel’s Hebrew-speaking Catholic community—said the Christian schools, especially the Catholic ones, achieve the highest matriculation rate among any demographic sector in Israel and produces graduates who make up a “very important segment of the Arab population” that contributes significantly to Israeli society, such as working in the high-tech industry.

“When we consider that and compare [it to] budgeting for ultra-Orthodox [schools]”—which also have a recognized-but-unofficial status in Israel—“we see here blatant discrimination,” Neuhaus told JNS.org, claiming the haredi Jewish schools receive 100 percent of their funding needs from the Israeli government.

Along the lines of Neuhaus’s comments, the 27-day Christian school strike was used in some circles as a platform to promote a pro-Palestinian narrative. Recently, the heads of Israel’s local Catholic churches, which are governed by the Latin Patriarchate of Jerusalem, published an article on their website that argued the school strike was “fundamentally about a flagrant violation of human rights and international conventions relating to cultural, social, and indigenous [Palestinian] minority rights.”

“We, the Palestinians…did not immigrate to the state of Israel, on the contrary, it came to us, so it must respect our cultural rights and especially our language, and everything we carry from our indigenous culture,” wrote the article’s author, Ibtisam Hanna Muallem, chairperson of the Arab Association for Human Rights.

While Neuhaus—a Jew who converted to Catholicism (though Jewish tradition states that there is actually no conversion out of the faith)—has ceased his previous political activities that protested Israeli “occupation” since he became vicar, his prior sentiment on the issue holds firm. But although using a term like “occupation” is usually a clear determinant of one’s allegiance regarding Israeli-Palestinian territorial disputes, some Israeli Catholics toe a fine line on what it means to be “pro-Israel” or “pro-Palestinian.” The Saint James Vicariate website states, “We are in union with Pope Francis and also at home in Israeli Jewish, Hebrew-speaking society.”

Such a statement would come into play when it comes to scenarios such as the Vatican’s approval this past May of a treaty whose language recognized the “State of Palestine.” Israeli Catholics subscribing to the above statement can agree with Pope Francis’s treaty and thereby essentially promote a narrative that calls out Israel for “occupying” Palestinian territory, but at the same time fully identify as citizens of the Jewish state of Israel.

The Vatican itself, meanwhile, had asked Russian President Vladimir Putin to intervene in the school strike issue and raise the matter with Israeli Prime Minister Benjamin Netanyahu during the leaders’ recent meeting in Moscow.

Giacinto-Boulos Marcuzzo, the patriarchal vicar of Jerusalem, said he believes that if Israeli Christian schools give up their current status and become officially recognized state schools, students risk losing their Christian-specific identity through national assimilation such as voluntarily joining the Israel Defense Forces (IDF). Yet Israeli Christians are already enlisting in the IDF in record numbers, casting doubt on Marcuzzo’s assertion of military enrollment being perceived as a threat to Christian identity. On the contrary, Christians seem increasingly eager to integrate into broader Israeli society.

Don Kenner, director of Catholic Friends of Israel, has told the IsraPundit blog, “[Lay] Catholics are patriotic, suspicious of an over-reaching government, and hard-line when it comes to things like terrorism. They sympathize with Israel in the same way that most Americans in general sympathize with Israel….Apart from that general observation…[In] major Catholic publications, anti-Israel material generally comes from priests, nuns, or liberal activists/writers, while a healthy pro-Israel response comes from lay Catholics.”

The school strike is over, but will Israel’s lay Catholics eventually be swayed to the pro-Palestinian side by the Catholic leadership? That long-term question remains as Israeli Catholics continue to find themselves at a political crossroads.