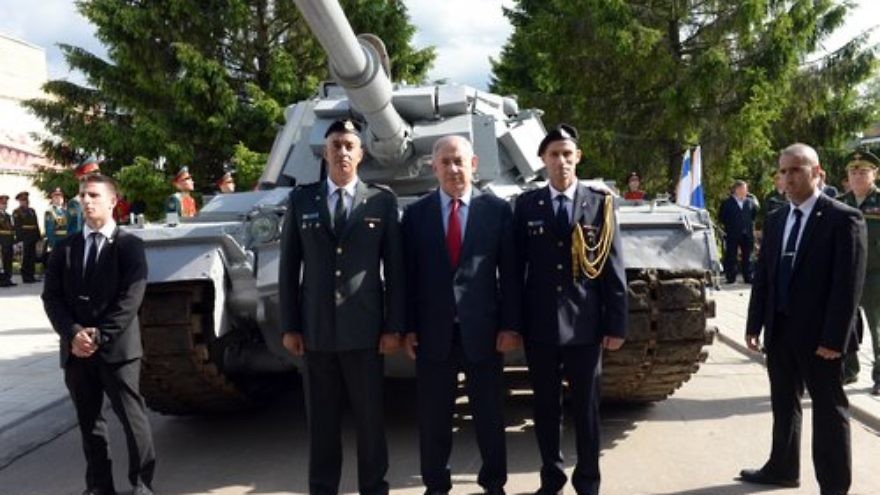 (December 16, 2017 / JNS) WASHINGTON—Although Israelis were distressed by the tension in their relationship with the outgoing Obama administration, that state of affairs has compelled Jerusalem to forge ties elsewhere that have greatly benefited the Jewish state, according to a leading expert on the Middle East, Russia and international security.

Dr. Ariel Cohen, a senior fellow at the Atlantic Council and director of the Center for Energy, Natural Resources and Geopolitics, analyzed Israel’s growing relationship with Russia and other countries in a Dec. 20 conference call sponsored by the Endowment for Middle East Truth, and in a subsequent interview with JNS.org.

“With President [Barack] Obama and the left wing of the Democratic Party turning against Israel, Prime Minister [Benjamin] Netanyahu has made a great effort to build better relationships with Russia, India, African countries and others,” Cohen said. Netanyahu’s recent visits to Azerbaijan and Kazakhstan illustrate Israel’s ability to find allies in unexpected corners of the globe, including some majority-Muslim countries.

Israel’s growing relationship with Russia is “complicated, but clearly a tremendous improvement over relations between the Jewish state and the old Soviet Union,” Cohen noted.

“One the one hand, Russia has allied itself with enemies of Israel such as Iran and the Syrian regime of [Bashar] Assad, and the Russians consistently vote against Israel at the United Nations and other international forums,” he said. But at the same time, Cohen pointed out, “Russia and Israel have significant trade relations, tourism and medical ties, with thousands of Russians going to Israel every year for medical treatment and teams of Israeli doctors visiting Russia to share their expertise and advice.”

One important practical benefit of Israel’s relationship with Russia, Cohen told JNS.org, is that the Russians have refrained from activating their anti-aircraft batteries in Syria when Israel has bombed weapons convoys traveling from Syria to Hezbollah bases in Lebanon. “The Russians have not interfered even though the casualties of the Israeli strikes included an Iranian general,” Cohen said.

Russia continues to support the Palestinian cause, “but at nowhere near the levels of backing that were provided by the old Soviet regime,” Cohen said. “In those days, the USSR was the main supporter and funder of Palestinian terrorism, as well as providing diplomatic and political support.”

By contrast, he said Russia today “does not actively support Hamas or other Palestinian terrorist groups,” and most of Russia’s sympathy for the Palestinian cause is expressed through votes at the United Nations. “This is a very significant change,” Cohen told JNS.org. “[Russian President Vladimir] Putin is not going out of his way to push Israel toward accepting a Palestinian state. He has much bigger fish to fry in the Middle East.”

While cautioning that the Russians are somewhat unpredictable and changing circumstances could alter Moscow’s strategy, Cohen emphasized that Russia’s main interest in the Middle East is to expand its regional influence. In pursuit of that goal, Putin is not limiting himself to the avenues that his Soviet predecessors utilized and is constructing temporary alliances of convenience. Russia’s attitude toward Iran, for example, “is not based on any shared values—the Iranians are Muslims and the Russians are mostly Orthodox Christians—but on their mutual hostility toward the United States,” according to Cohen.

Humanitarian considerations are completely irrelevant to Putin in his effort to expand Russian influence in the region. “In Syria, he will not hesitate to fight to the last Syrian,” Cohen said. “Russian foreign policy is deeply cynical.”

It was the Obama administration’s coldness toward Israel and retreat from the region in general that forced Israel to look for ways to fill the vacuum by developing new relationships, Cohen believes. “Israel became just one in a long line of traditional American allies in the Middle East whom the Obama administration distanced itself from, including the [Abdel Fattah El] Sisi regime in Egypt, Saudi Arabia and the other Gulf states. So naturally Israel has had to look elsewhere for allies, even temporary ones,” he said.

As for U.S. policy under President-elect Donald Trump, Cohen said that in the short run, “the Trump administration will undoubtedly focus on the threat from ISIS (Islamic State) rather than have a confrontation with Russia.” Once Islamic State is defeated, Trump will need to address larger strategic issues in the Middle East, and he is likely to find that Putin “is a really tough customer,” Cohen said.

For Israel, based on Cohen’s assessment, the year ahead will be a period of carefully watching, waiting and being prepared to adapt to new regional circumstances.