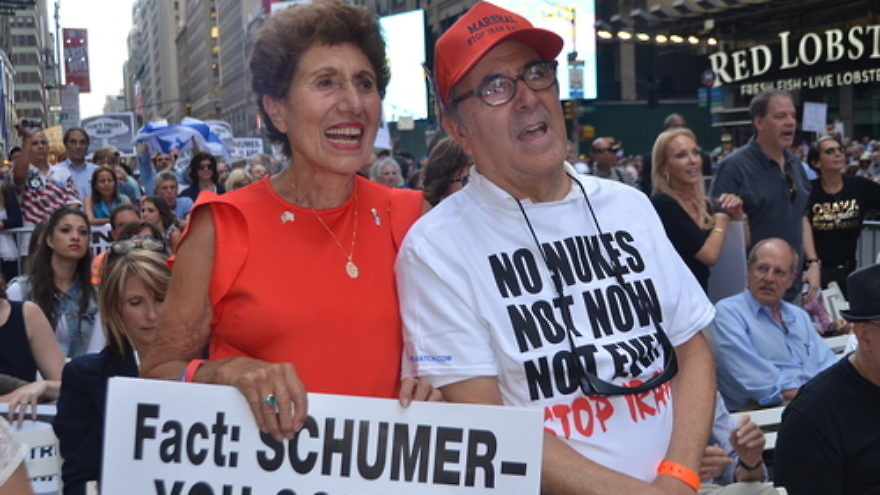 Pictured in front, Helen Freedman, director of Americans for a Safe Israel, with Charles Bernhardt at a July 22 rally against the Iran deal in New York City. The sign held by Freedman targets the vote of U.S. Sen. Chuck Schumer (D-N.Y.), who later announced he would oppose the deal. But the Senate will fall short of producing the 67 anti-deal votes needed to override a presidential veto of its collective decision. Credit: Maxine Dovere.
Republish this article
1425 WORDS
Spread the word.
Help JNS grow!
Share now:

When she became the 34th U.S. senator to publicly support the Iran nuclear deal, thereby stripping Congress of its power to block the Obama administration-brokered accord, Sen. Barbara Mikulski (D-Md.) altered the political calculus for the deal’s opponents.

Now, those who have strongly campaigned against the 159-page agreement face a choice: continue their vociferous opposition, or call for the strictest possible implementation of the deal.

“For those who oppose the deal, killing it would obviously have been the preferential outcome,” Larry Hanauer, a senior policy analyst for the RAND Corporation think tank, told JNS.org. “Having failed to do so, comprehensive implementation of the deal is going to be the biggest constraint on Iran’s nuclear program.”

Following Mikulski’s support, President Barack Obama not only attained the 34 affirmative votes required to sustain his veto of any Congressional rejection of the agreement, but by Tuesday secured the 41 pro-deal votes Senate Democrats needed to prevent an anti-deal resolution from being introduced. Now, Obama will not need to use his veto.

At the same time, some deal opponents believe that each senator’s opinion still matters.

“Today (Sept. 2), we know that the Senate will not override a presidential veto of legislation that will disapprove the nuclear deal with Iran. However, we also know now that once the votes are tallied, a bipartisan majority of America’s representatives in Congress will oppose this deal….Now, days before the Congressional vote, I’m writing to ask you to keep fighting for a better deal,” wrote Robert A. Cohen, president of the American Israel Public Affairs Committee (AIPAC), in an email the day Mikulski revealed her vote.

Congress has until Sept. 17 to weigh in on the deal before its 60-day review period expires.

“Many members of Congress are still undecided,” Cohen wrote. “We must continue to engage them and make our case.”

The Orthodox Union, too, isn’t backing down. The group partnered with AIPAC to bring hundreds of rabbis and synagogue leaders to Capitol Hill on Sept. 9 for a rally, during which they urged Congress to reject the deal. A coalition of organizations including the Zionist Organization of America (ZOA), Christians United for Israel (CUFI), and Heritage Action held a separate Capitol Hill rally on the same day.

CUFI vowed in an email Sept. 3 that it will “continue to fight for every Democratic vote to ensure that President Obama will be forced to use his veto.” ZOA distributed Cardin’s Washington Post op-ed that announced his opposition of the deal, using the email subject line, “ZOA Praises Democrat Sen. Ben Cardin for Opposing Disastrous Iran Deal.”

Even after Congress votes, lawmakers opposing the agreement could try to pass new sanctions that may prompt Iran to walk away from the deal.

But because American allies in Western Europe have signaled they won’t reimpose sanctions, Iran would then be free to sprint towards a nuclear weapon while trading openly with most of the world. That, according to Hanauer, leaves would-be detractors with little choice but to work within the parameters of the deal.

“People who are suspicious of Iranian intentions should now become the deal’s most ardent supporters,” said Hanauer, who previously served as a senior staffer for the House Permanent Select Committee on Intelligence and in multiple Pentagon posts.

In some circles, the shift from opposition to enforcement is already beginning to take place, with those previously committed to killing the deal coming to terms with the prospect of its ratification.

In Los Angeles, 30 Years After, a non-profit seeking to promote political participation among Iranian-American Jews, had waged a campaign to sway legislators against the deal.

“Our primary effort has been to urge our members of Congress to consider opposing the deal, although we do understand the high hurdle faced in rejecting it,” Sam Yebri, the group’s president, told JNS.org two days before Mikulski came out in support of the deal.

Upon Mikuslki’s announcement, 30 Years After—which had already met with multiple Los Angeles-area members of Congress to voice its opposition—changed its approach.

“It is now incumbent on the [Obama] administration to work with Congress to robustly enforce the deal and to ensure that Iran does not cheat or breach the deal, especially given that Iran has violated over 20 international agreements over the last decade,” Yebri wrote in an email the day after Mikulski’s statement.

Mitchell Bard, who heads the American-Israeli Cooperative Enterprise (AICE), a non-profit aiming to strengthen U.S.-Israel ties, called the deal “a disaster that basically is unverifiable and leaves in place the nuclear infrastructure that the president had vowed to eliminate.”

Given the accord’s likely ratification, however, Bard said there are certain steps the U.S. can take to minimize its negative impact.

“Number one is to very carefully and closely monitor Iran’s actions to ensure that it lives up to the terms of the agreement,” Bard told JNS.org.

Bard suggested a second way to respond to the deal’s passage: passing new sanctions to mitigate the infusion of cash to the Iranian regime once the old sanctions are lifted.

According to the deal, once Iran lives up to some initial terms, the president will use authorities baked into existing sanctions legislation to lift economic restrictions with or without approval from Congress. That would allow Iran to freely export petroleum and repatriate about $60 billion in assets currently frozen abroad, according to a report by the Congressional Research Service. Critics of the Iranian regime are worried some of those assets will go towards the Islamic Republic’s oft-stated goal of undermining and ultimately destroying the state of Israel.

“Viscerally, when some regime says ‘Death to Israel,’ and they say, ‘death to America,’ and in many case say, ‘Death to Jews,’ our history does not allow us to ignore it,” Michael Siegal, chair of the board of trustees for the Jewish Federations of North America (JFNA), told JNS.org.

JFNA has refrained from taking a position for or against the deal, instead choosing to facilitate the efforts of the more than 150 local Jewish Federations under its umbrella.

Iran has signaled that new sanctions—even if they are aimed at curbing support for its terror proxies like Hamas and Hezbollah—could prompt it to walk away from the deal. In a July 20 letter to the United Nations Security Council, Iran wrote that it would reconsider its adherence to the deal “irrespective of whether such new sanctions are introduced on nuclear-related or other grounds.”

U.S. allies who participated in the nuclear negotiations have indicated that they will not re-impose sanctions; therefore, if Congress chooses to do so, Iran would reap the benefits of economic relief without any restrictions to its nuclear program, RAND’s Hanauer said.

“That’s a win-win for Iran and a lose-lose for the United States,” he said.

A potential middle ground would be to renew statutory sanctions with the understanding that the president would immediately waive them. That would allow the administration to swiftly reimpose economic restrictions if Iran broke its commitments.

In June, Sen. Mark Kirk (R-Ill.) introduced the Iran Sanctions Relief Oversight Act, which would extend the Iran Sanctions Act of 1996—set to expire this year—for an additional 10 years. Its only original co-sponsor was Sen. Bob Menendez (D-N.J.), one of three Democratic senators to come out against the Iran deal.

But the path forward on that bill is muddled. It’s unclear if Iran would interpret renewal legislation as a breach of the deal. Moreover, lawmakers are still adjusting to the new political outlook.

“He’s just not there yet on discussing next steps,” Menendez’s communications director, Tricia Enright, wrote in response to an emailed question about whether the senator would push to renew sanctions.

Meanwhile, American Jews who opposed the deal must now determine how to navigate what has become a political minefield. For some, it’s as simple as agreeing to disagree.

“We do not support this deal,” Jonathan Greenblatt, the national director of the Anti-Defamation League (ADL), wrote in an email. “But some of the legislators who will are champions of civil and human rights that have earned the respect of ADL and so many Americans.”

Yet others would like to see real political ramifications for the deal’s backers.

“Unless some members of Congress are punished in the election,” said AICE’s Bard, “they’re going to continue to believe that it really doesn’t matter what position they take—they can count on Jewish support.”