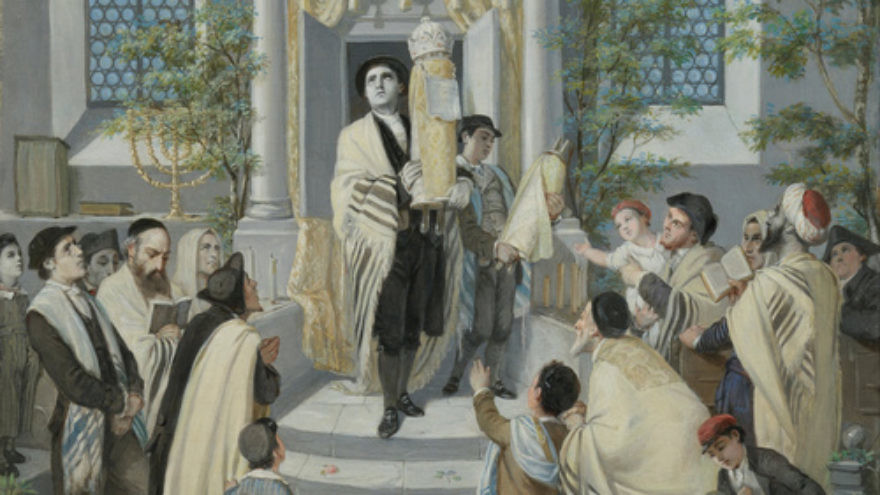 (April 22, 2015 / JNS) At sundown on Saturday, May 23, Jews around the world will start the two-day holiday (which lasts only one day in Israel) of Shavuot. Also known as the Festival of Weeks because it marks the completion of the counting of the Omer period—which is 49 days long, or seven weeks of seven days—Shavuot is one of the Jewish calendar’s shalosh regalim pilgrimage holidays.

Unlike the other two pilgrimage festivals—Passover, which is marked through the retelling of the Exodus story at the seder, and Sukkot, which is celebrated by building a hut or sukkah outside one’s home—there is no definitive ritual associated with Shavuot in the text of the Torah. As such, many Jews struggle to connect with the holiday, which has yet another name: “Chag HaKatsir,” meaning the Harvest Festival.

But despite its undefined nature, Shavuot “is a gift of a holiday,” says Roberta Miller, a teacher at Chicago Land Jewish Day School in Chicago.

“It’s when we got the Ten Commandments, God’s greatest present to the Jewish people,” she says.

In that spirit, here are seven ways to infuse some meaning and minhag (tradition) into your Shavuot this year:

It is traditional on Shavuot to eat dairy foods. Rabbi Robyn Frisch, director of InterfaithFamily/Philadelphia, says some believe this is because the scripture compares Torah to “honey and milk… under your tongue” (Song of Songs 4:11). Another explanation is that when the Israelites received the Torah for the first time, they learned the kosher dietary laws and didn’t immediately have time to prepare kosher meat, so they ate dairy instead.

Baking and consuming dairy foods can differentiate Shavuot from other holidays, says Miller.

“We all have very strong memories associated with scent. If I smell a honey cake, I think of my grandmother and Rosh Hashanah. The smell of cheesecake generates a connection to Shavuot for my kids,” she tells JNS.org.

For families with young children, games are a great way to educate youth about the messages of Shavuot. Miller suggests counting games.

For slightly older children, Miller offers a Jewish commandments version of Pictionary®, in which before the holiday children draw their favorite commandment or commandments on a notecard. The cards are mixed up and put into a box or bag. Then, the family gets together, members draw picture cards, and someone acts out each commandment while participants guess which commandment it is and why it is important.

On the second day of Shavuot, we read the Book of Ruth, the story of the first Jew by choice. Frisch explains that it is also a story of welcoming the stranger and inclusivity. Shavuot is the perfect holiday for inviting new friends over for a meal, or for opening one’s home to people who are interested in learning more about Jewish traditions, says Frisch.

Taking part in a tikkun leil Shavuot—a night of Jewish learning—is another Shavuot custom. Many traditional Jews stay up all night on the first night of the holiday to study Torah. Today, many non-observant Jews aren’t affiliated with a particular synagogue. As such, Frisch suggests hosting a communal night of learning (not affiliated with any particular religious sect or institution) that can draw in a more diverse mix of Jewish learners.

“Jewish learning is being reclaimed,” Frisch tells JNS.org, adding that it is necessary for that learning to be accessible.

For people who live in smaller communities without a formal Shavuot learning event, Frisch says there are multiple online sources that can be used to organize a grassroots evening of learning at an individual’s home.

“Jewish learning doesn’t have to be Biblical texts. … Torah is more than the Five Books of Moses. It could be liberal values or social justice or just a discussion about Jewish identity or Jewish laws,” Frisch says.

Tradition has it that King David, Ruth’s (as in the Book of Ruth) great-grandson, was born and died on Shavuot. Miller suggests holding a King David birthday party—featuring decorations, cake, ice cream, and gifts.

“Use it as a learning tool,” she says, noting how the party can springboard into a historical discussion. “What would you write on a card to [King David]? What do you want to ask him? What would he want for a present? What would he put in the goody bag that he gives to each of us?”

On Shavuot, it is customary to decorate our homes and synagogues with flowers and plants. Ruthie Kaplan, who lives in the Nachlaot neighborhood of Jerusalem and is a former Hebrew school teacher, tells JNS.org that following this tradition of surrounding ourselves with the lushness of the natural world could “add a lot of beauty to the day.”

Shavuot comes in the late spring or early summer, when the weather is perfect and the flowers are blossoming. Kaplan says that is “the perfect time” to connect with nature and appreciate the beauty of the world that God created for us.

Kaplan says that a deeper reading of the Book of Ruth can transform Shavuot from simply another Jewish holiday into an opportunity to set goals and resolutions. Ruth, she says, believed in something (Judaism) and followed through on her belief.

“That story of Ruth excites me and really comes to life on Shavuot,” says Kaplan. “Ruth is open to the truth and therefore she sees it and she is willing to be honest with herself. For anyone searching and struggling, Ruth is a good role model for life.”