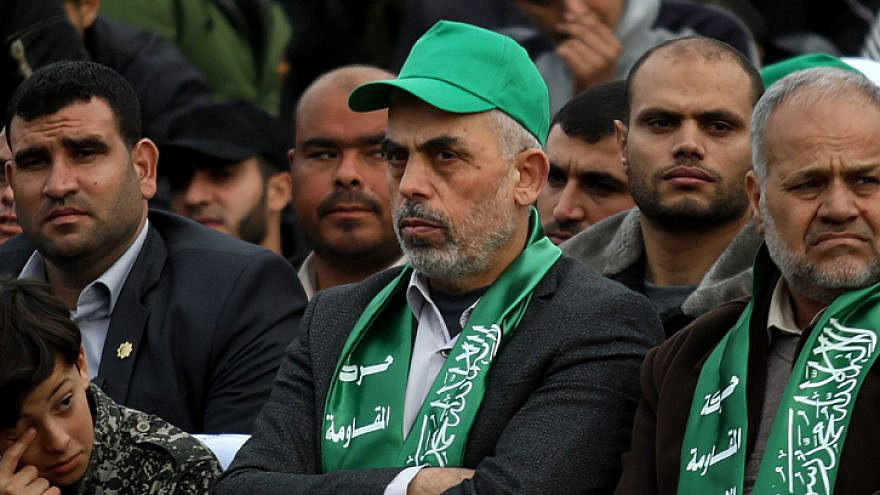 (May 1, 2022 / JNS) The leader of Hamas in Gaza, Yahya Sinwar, said on Saturday that a war would erupt unless Israel ceased enforcing the law at the Al-Aqsa mosque, and accused Knesset member Mansour Abbas of treachery for joining Israel’s coalition government.

“We must prepare for a big war if Israel does not stop harming the Al Aqsa mosque,” the Hamas leader threatened, according to Ynet.

The Hamas leader also praised those who had attacked Israeli security forces and civilians in Jerusalem during the month of Ramadan. He singled out the April 7 Tel Aviv shooting, in which three Israeli civilians were murdered.

Ra’ad Hazem, the terrorist who carried out that attack and who was shot dead the following morning by Israeli security forces in Jaffa, had become “a Palestinian symbol,” said Sinwar.

“The recent heroic attacks in Israel proved that it is weaker than a spider’s web,” he declared.

Addressing Ra’am Party chairman Abbas, Sinwar said: “The safety net you are providing to a government that harms the Al-Aqsa mosque is a crime we will not forgive. This is a denial of our religion and your Arabness.”

Sinwar called on “our brothers in the Islamic Movement’s Southern Branch,” of which Abbas is the head, to go further than merely suspending their Knesset activity.

On April 17, following the increase in tensions due to the clashes on the Temple Mount, the Ra’am announced that it was freezing its parliament activities and coalition membership. The announcement was viewed as largely symbolic as the Knesset will be in recess until May 9.

“If you have a conscience, tonight you have to decide,” said Sinwar.

Abbas responded to Sinwar’s comments a few hours later, stating, “We reject Yahya Sinar’s accusations and we do not owe him a thing. We are committed only to Arab society here. We reached many objectives and we have a long way to go for the future of our society,” reported Ynet.

In his opening remarks to the Cabinet meeting on Sunday, Israeli Prime Minister Naftali Bennett said: “Yesterday, I heard the leader of Hamas in Gaza, Yahya Sinwar, call on Mansour Abbas to break up the government. It is already clear to me at this stage that Hamas does not love this government; perhaps they miss the suitcases of dollars or they simply do not love the possibility of us all working together to improve the conditions of Israel’s Arab citizens.

“This is a very important point, [on] which the masks come off, and it is clear to everyone who wants what. That it is Hamas that wants to topple our government says it all. On this as well, Sinwar cannot be allowed to win.”

“He is trying to heat up the ground. He is frightened and deterred by what we did to him in Gaza exactly one year ago during ‘Operation Guardian of the Walls,’ and since then,” said Kochav. “Due to our capabilities, he is trying to circumvent the IDF and to heat up the Temple Mount and Judea and Samaria.”