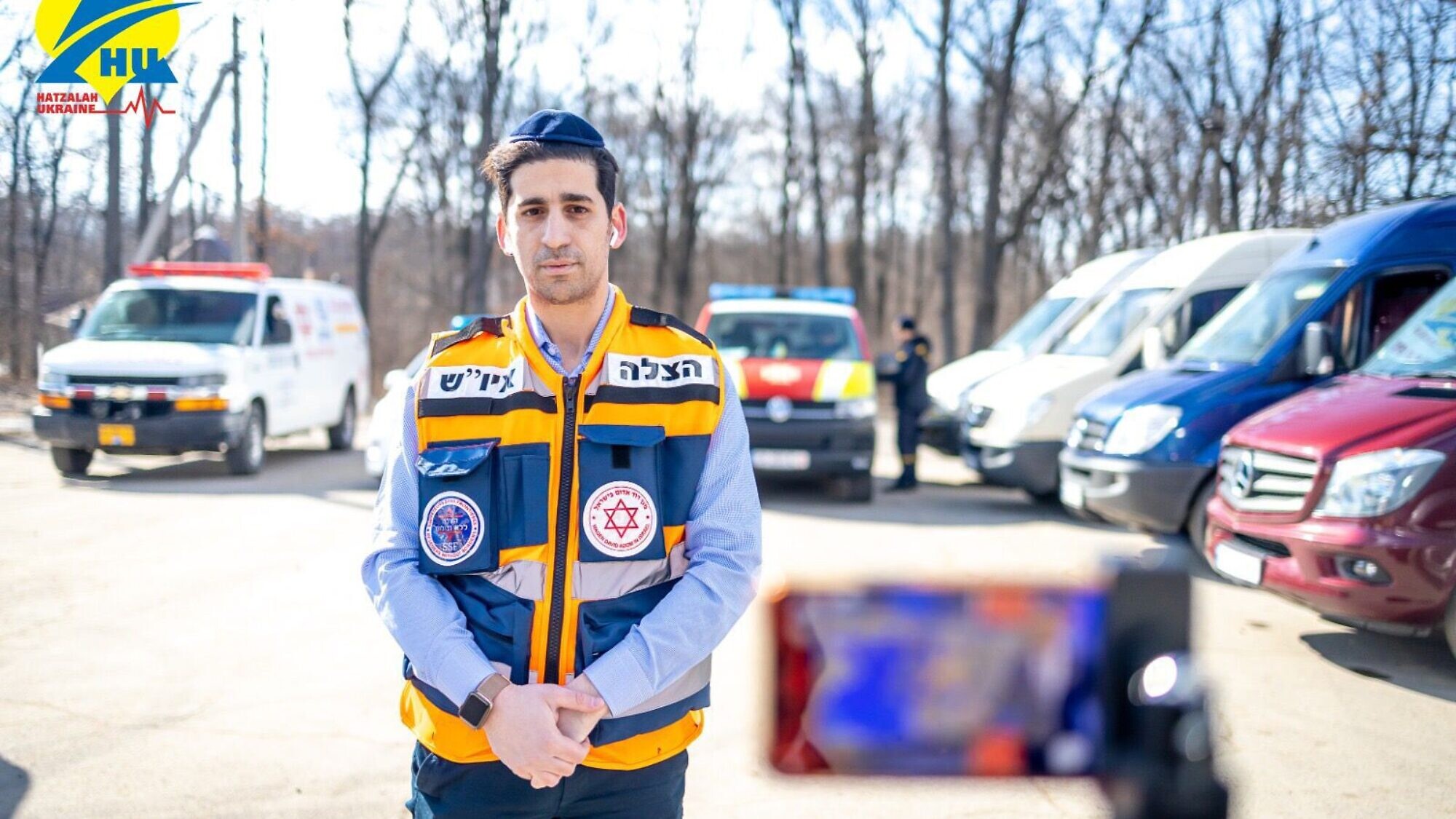 (March 2, 2022 / )A Ukrainian woman who just gave birth to twins prematurely is holed up in her freezing home. She has no diapers, no formula and is not making enough milk to nurse her babies because there is no food.

“We are working on getting a convoy of police and army personnel to cooperate on the matter and get them out to safety,” said Hatzalah Ukraine’s Director-General Shlomo Rosilio. “This is the kind of situation we are dealing with every day.”

Rosilio, who started Hatzalah Ukraine seven years ago, shortly after the war last war, said the situation on the ground is “getting worse by the minute.” Thousands and thousands of refugees – Jewish and non-Jewish – are trying to leave the country as Russian missiles rain down.

“It is an operation to take people out – one that is not easy at all,” Rosilio explained. “We have to find a bus who will take people to the border, and it costs a fortune. One bus is $8,000 and the trip can take six hours.”

Cars line up outside the exits from the country begging for permission to leave. In other cases, he said, people are walking miles and miles on foot in hopes of leaving Ukraine.

Rosilio has not left the country. He and his team of Hatzalah Ukraine volunteers have stayed on the ground, pooling their resources and coordinating projects to help the victims of war.

The organization is buying food for the refugees and those in shelters and safe houses, costing hundreds of thousands of dollars. The organization, he said, needs more money so it can save as many lives as possible.

“I put my business aside, everything aside, so that I would not have to think about anything else but these people,” Rosilio said.

He sent his wife and children to Israel on their own.

“In contrast to Russia’s lies that allegedly bomb only military targets, all Ukrainian cities are aggressively bombarded with an attack that has suddenly started from unexpected directions, apart from heavy airstrikes and tanks and armored vehicles and missiles, there is also a Russian invasion of tens of thousands of infantries and paratroopers,” a website dedicated to raising money for Hatzalah Ukraine describes. “There are many civilian casualties on the Ukrainian side and severe damage to homes and kindergartens.”

“It is impossible to turn off your phone in a situation like this,” Rosilio said.

Take the 78-year-old woman who is living in the middle of the war zone. She cannot leave her home as she would likely die on the commute to the border. But she is in desperate need of oxygen. To bring it to her, Rosilio or his team members will have to risk their lives.

There are also orphans. They lack paperwork and therefore cannot be evacuated from Ukraine. On Tuesday, Rosilio was at an orphanage of 50 special needs kids for which Hatzalah Ukraine had purchased $10,000 worth of food and other supplies. While they were delivering it, sirens went off and they had to run for shelter.

That same night, he saw a mother with her two kids schlepping across the freezing snow. Their home had been destroyed and they were wandering around in the cold with nowhere to sleep.

“Things like this are just devastating,” Rosilio said. “I imagine if it was my own kids.”

He said, “I cannot close my eyes when people are in this kind of condition. This is not going to end soon; it is only going to get worse. Please help.”

Make a gift here and save lives.