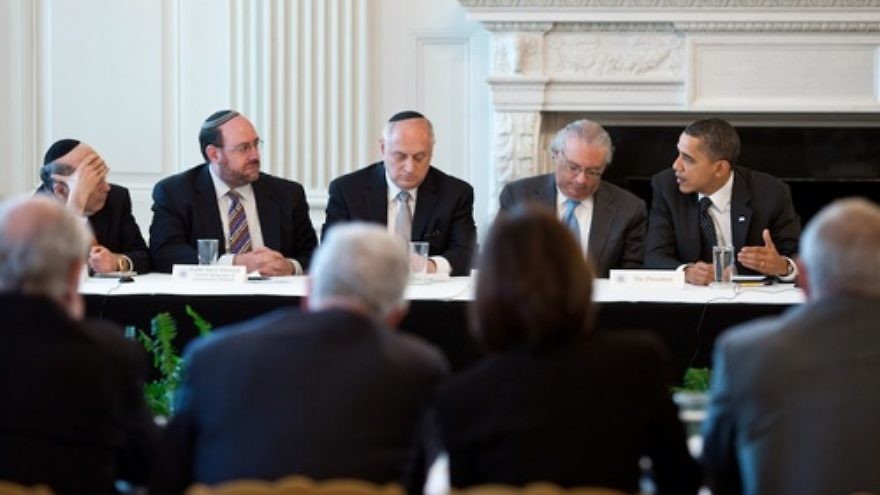 Israeli-Palestinian conflict negotiations and the Iran nuclear program are at the top of the Jewish community’s agenda ahead of tonight’s annual State of the Union address.

Like presidents before him, President Barack Obama has traditionally used this address before Congress to lay out an ambitious agenda—and he probably still will—but it would be difficult to do so without acknowledging the saga endured by the plans he touted in his State of the Union address last year.

One of his highest priorities, the implementation of the Affordable Care Act, has been plagued by errors and delays. Undoubtedly, the president will point to the success stories resulting from the legislation, while reminding the public that the errors and missteps—some of which he attempted to solve through executive order—are to be expected from any monumental, but fledgling, government program.

Judging from statements emanating from the White House, however, even recalcitrant Republicans might not hinder Obama, who has previously shown his willingness to use his executive authority to enact regulations without the backing of Congress. Today, the office of White House Press Secretary Jay Carney announced that while the president in tonight’s speech will tout raising the federal minimum wage to $10.10, through Congressional passage of the Harkin-Miller bill, he also plans to commit himself to using “executive authority to raise the minimum wage to $10.10 for those working on new federal contracts for services.”

Other accomplishments that Obama might review in the State of Union include his recent reforms in accountability and transparency, instigated by the revelations that the Internal Revenue Service was putting extra scrutiny into their auditing of Tea Party and right-wing-affiliated groups, and that the National Security Agency was collecting information beyond what many Americans believe is acceptable.

What appears to interest the Jewish community most, however, is the president’s stance on the Israeli-Palestinian conflict negotiations being facilitated by Secretary of State John Kerry, and the P5+1 conferences in Geneva aimed at reducing Iran’s nuclear capability. If the subject comes up tonight, the president will likely hail the Joint Plan of Action initiated earlier this month as a major breakthrough in relations with the Islamic Republic of Iran—a nation that the U.S. had not had diplomatic relations with in 30 years. At the same time, he will urge the public to have patience and faith in the process and urge lawmakers to not support the Menendez-Kirk bill and avoid interfering with the diplomacy currently underway.

To preview the speech, JNS.org asked various leaders in the Jewish community to identify what they think should be included in the president’s address. Here are their responses:

William Daroff, senior vice president for public policy and director of the Washington office of the Jewish Federations of North America:

“Jewish Federations urge President Obama to reiterate his commitment to ensuring Iran does not develop a nuclear weapons capacity, while keeping ‘all options on the table.’ Federations also urge the President to continue promoting the critical importance of charities in our society, speak out in support of Senate passage of the Convention on the Rights of Persons with Disabilities, and to advocate for assessable long-term care for older Americans and services for their care-givers.”

Sarah Stern, president and founder of the Endowment for Middle East Truth:

“I would like the President Obama to clearly state that the United States and Israel are engaged in a shared and existential struggle with radical Islam and that the greatest threat facing the United States, Israel and most of Europe is a nuclear Iran.

“I’d be encouraged to see him say that ‘yes, we’d like to see two states living in peace side by side, but it is unlikely to come about, as long as the Palestinians continue to teach their children that one day all of the land will be theirs. In order to achieve the lofty goal of peace, the Palestinians must end their incitement, which is based on an unjustifiable hatred that is unacceptable. If and when that day comes America will be ready to assist the Israelis and Palestinians in peace.’

“On the topic of negotiations with Iran, I’d like to see the president assert that it is necessary to use all means to defeat a nuclear Iran, including negotiations, sanctions and the military option. I’d like to see the president say, ‘I have taken notice of the Iranians’ claim that the negotiations do not impede their goal of nuclear capability. I differ in that view, but if that is their view, then they have proceeded to negotiate in bad faith, and it is reasonable to prepare new sanctions, and I support such efforts.’”

“We all have a fair idea of what he might be saying on the domestic issues.

“The only thing I truly will be listening for is to what he says with regard to the security of the state of Israel and the relationship with Iran. I’m anxious to hear his comments. I’ve been less than satisfied with the approach that they’ve taken to date.

“I’m obviously not happy with the Iran deal and I would like to hear him say that if Iran doesn’t meet all of the expectations, not only will the U.S. pull out, but they will at the same time ratchet up sanctions that they’ll impose in the Menendez-Kirk bill.

“And with regard to Israel, I don’t know exactly where we are in this peace process, but it certainly doesn’t sound like Secretary Kerry’s approach to date has been what’s necessarily in the best interest of Israel. I’d like to hear him further clarify what he’s going to do to secure Israel, especially as you look at what was going on this past week in the West Bank with terrorist attacks being planned.”

“I think that he will definitely address the two major issues: Iran and the Kerry initiative for the two-state solution.

“We know that the president is committed to this effort; what I think we would like to hear is a renewed commitment to Israel, to Israel’s security, and to the idea that this conflict with the Palestinians can be settled and it could be done now, this year. And that he will back to the hilt Secretary Kerry’s efforts, and that he will personally intervene at the right moment, and that this is a time for the leaders of Israel and the Palestinian Authority to show leadership and to take bold decisions for peace. But that the United States will always have Israel’s back and would never abandon that.”

Steve Rakitt, CEO of the Jewish Federation of Greater Washington:

“I hope to hear President Obama reaffirm that the United States stands firmly with the people of Israel in dealing with the Iranian nuclear threat and in the Israeli-Palestinian negotiations.”

Dina Siegel Vann, director of the Latino and Latin American Institute of the American Jewish Committee:

“I would like to hear the president say that comprehensive immigration reform is a top priority for his administration. This issue is in the national interest and the smart thing to do. Fixing our broken immigration system has to contemplate a path to citizenship for the 11 million undocumented immigrants, effective enforcement, increased visas for high and low-skilled immigrant workers to satisfy the labor needs of American businesses to remain competitive in a global economy, and support for family reunification.

“He should also say that he will spare no effort or resource and will invest whatever political capital necessary to make this a reality, hopefully with the concurrence of those in Congress and the majority of the American people, who are convinced, as I am, that this anomalous situation runs counter both to our values and our interests.”

“The president should address the deep concern about Iran’s continued pursuit of nuclear weapons at a time when the Middle East is teetering between order and chaos. He should address the growing gaps between our society’s political extremes and call for a renewed American dialogue based on the values of civility, patriotism and the divine call to build a better world. And, finally, he should speak passionately about the Jewish value of welcoming the stranger—a value that leads us to embrace the immigrant and refugee and help them find their place in our country.”

“One of the things I would love to hear in the State of the Union, though I don’t think it’s going to come up although we would love to see it, is the commitment to senior citizens housing, in particular, but more nationally, the issues relating to refocusing our nation’s housing policy to persons who might need affordable rental housing.

“We’ve had a lot of discussion and rhetoric over the last number of years about homeownership and I’d love to see us have a little more of an emphasis back to affordable rental housing—in particular where older persons can receive community services at a place where they live, which is significantly cheaper and much easier and cost effective than having to go to institutional settings when they don’t really need it.

“In years past we’ve had a strong affordable housing policy, but that has changed over the years as the pie has gotten significantly smaller. So I’d love to see much more emphasis back on affordable housing for older persons, especially since the population is getting that much older.

“The nature of domestic spending has gotten significantly less over the years and with all the discussion that we heard on the Hill over the last couple of years, it is getting more and more difficult with the sequestration; all of that is less and less money for senior housing. So the affordable housing pot has just begun to get smaller and that has been difficult for those of us who are particularly interested in this issue.

“One of the other things would be with regard to health reform, which I’m sure he will mention in his speech. We’d like to see references in particular to the importance of continued outreach to the younger, more-healthy older population—those in their 50s and 60s who could not get insurance coverage before the health reform and affordable care was enacted, but now obviously can, and we strongly endorse and support that.

“Lastly, we want to reinforce our strong commitment in support of the state of Israel.”