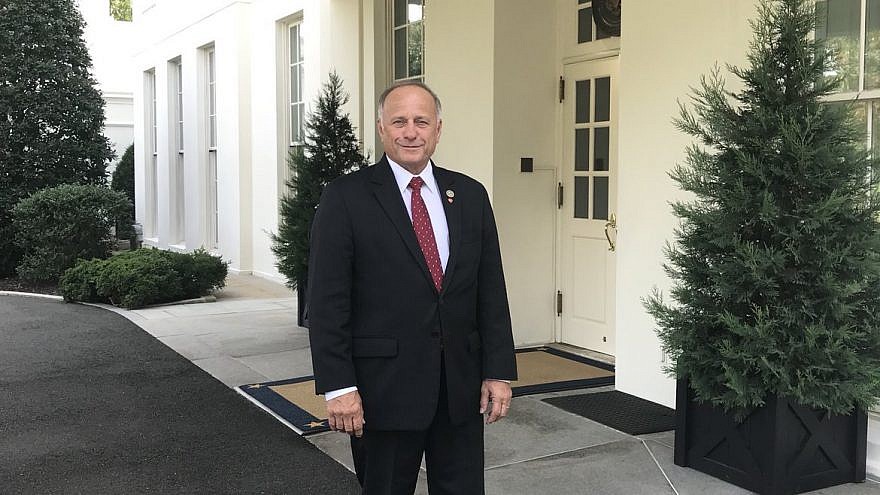 (May 14, 2020 / JNS) Rep. Steve King (R-Iowa) has said that House Minority Leader Kevin McCarthy (R-Calif.) told him that he would “advocate” for his return to committee assignments he was stripped of in January 2019, following comments the nine-term congressman made about white supremacy.

“On April 20, Kevin McCarthy and I reached an agreement that he would advocate to the steering committee to put all of my committees back, all of my seniority,” said King at an event on Monday, reported The Sioux City Journal. “When Congress comes back into session, when the steering committee can (inaudible) together, I have Kevin McCarthy’s word that that will be my time for exoneration.”

A McCarthy spokesperson told JNS, “Congressman King’s past comments cannot be exonerated. Committee assignments are determined by the steering committee, and he will have the opportunity to make his case.”

However, Republicans and Democrats on that committee have objected to reinstating King on the committee assignments he previously held, which were the House ones on the Judiciary, Agriculture and Small Business.

King has a history of making controversial and racist remarks and moves.

In January 2019, King told The New York Times, “White nationalist, white supremacist, Western civilization—how did that language become offensive? Why did I sit in classes teaching me about the merits of our history and our civilization?”

As a result of the remarks, King lost his committee assignments and was condemned in a passed resolution in the U.S. House of Representatives that called him out by name.

The Washington Post reported that King spoke in Vienna in August 2018 with Unzensuriert (“Uncensored”), a website associated with Austria’s far-right Freedom Party, following a five-day tour in August of Jewish and Holocaust historical places in Poland, funded by From the Depths, a group that seeks to educate lawmakers about the Shoah.

“Current Iowa Congressman Steve King does not represent the values of the Republican Party or those of the Republican Jewish Coalition,” said the organization’s executive director, Matt Brooks, in a fundraising email. “His record of inflammatory comments condoning white supremacists and anti-Semites is the antithesis of our goals and values as an organization. King’s egregious record even includes meeting with and endorsing a candidate who appears on neo-Nazi podcasts.”

Ahead of the June 2 primary, RJC PAC has donated $5,000 to Feenstra’s campaign, the maximum amount a political action committee can give to a candidate in an election year.

“In Congress, I’ll be a champion for a strong, pro-Israel foreign policy. Honored to have the support of the @RJC,” tweeted Feenstra.

In Congress, I’ll be a champion for a strong, pro-Israel foreign policy. Honored to have the support of the @RJC. #IA04https://t.co/jBqEqicbSk

The RJC last hosted an event with King in 2012.