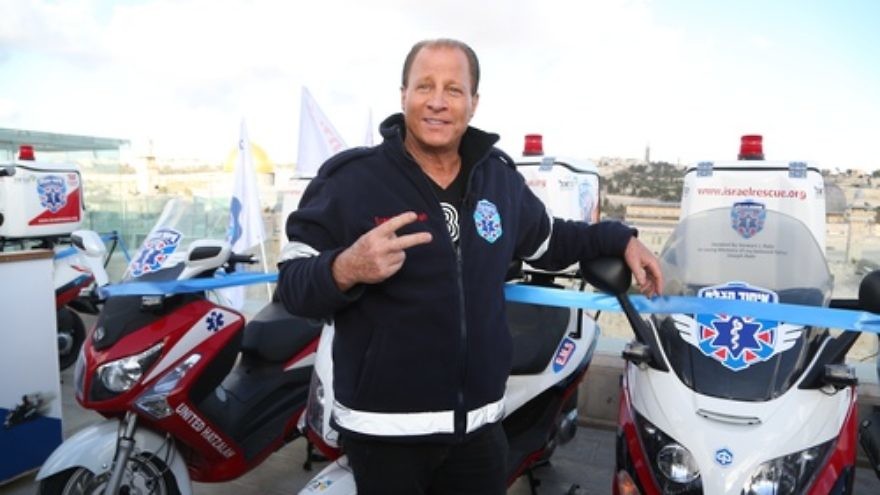 Click photo to download. Caption: Billionaire and philanthropist Stewart Rahr pictured with ambucycles at a Jan. 28 event in Jerusalem that marked his donation of 50 ambucycles, worth a total of $1.3 million, to United Hatzalah. Credit: United Hatzalah.
Republish this article
735 WORDS
Spread the word.
Help JNS grow!
Share now:

Rahr, 67, had originally donated a fleet of 12 ambucycles, which were on display at the event. (Ambucycles are outfitted with a specialized storage box that contains a complete trauma kit, oxygen canister, blood sugar monitor, and defibrillator.) But after Rahr shared his “rags to riches” life story—how after selling his billion-dollar pharmaceutical business, Kinray several years ago he decided to dedicate the rest of his life to philanthropy and “helping the little guy”—inspired attendees began making pledges towards additional ambucycles on the spot.

Feeding off of their enthusiasm, Rahr committed to match every donation to United Hatzalah dollar for dollar, thus quadrupling his initial pledge.

Rahr’s generosity comes amid the backdrop of a new campaign to double United Hatzalah’s ambucycle fleet from 300 to 600 vehicles, which would drastically cut down emergency response times across the country.

United Hatzalah is Israel’s first and largest fully volunteer emergency rapid response service. By utilizing an ambucycle fleet with its patented GPS based dispatch technology, the group’s 2,300 medical volunteers are able to arrive on site to administer urgent care within minutes of the initial call of distress—bridging the gap between emergency and ambulance arrival.

Rahr told JNS.org that he only recently learned about United Hatzalah and its work but was “so impressed with their enthusiasm that after just 30 seconds I was hooked.” He added that “saving lives brings [me] instant gratification.”

In an interview with Bloomberg TV, Rahr explained that “there are no luggage racks on a hearse (you don’t take your money with you when you die), and since God blessed me with so much, I want to give back and share with those in need.”

United Hatzalah President and Founder Eli Beer told JNS.org that Rahr is “truly an inspiration” and “a great Jewish philanthropist that only wants to do good, and only wants to give back.”

In his remarks from the podium, Beer referred to the fact that Rahr had arrived in Israel for the event only several hours after accompanying Israel’s Knesset delegation to Poland for International Holocaust Remembrance Day.

“Just yesterday, on International Holocaust [Remembrance] Day, Rahr went to Auschwitz to see where millions of Jews were murdered. At United Hatzalah here today, we are doing the exact opposite of the Nazis—fighting for human lives. Stewart Rahr is fully committed to our cause and we are proud to have his support; this generous donation will assist us to save even more lives,” said Beer.

Rahr decided to make the initial donation after watching an inspirational TED (Technology, Entertainment, Design) talk delivered by Beer, which has generated hundreds of thousands of online views. At first he pledged four ambucycles and then sent out an e-mail to his personal rolodex of more than 700 A-list celebrities, asking them to donate whatever they could to United Hatzalah, with a promise to match every donation.

At the Jerusalem event, Rahr was sporting a personalized Hatzalah fleece bearing his name in Hebrew and English, bright yellow athletic shoes, and a yellow watch. Yellow he explained, is his favorite color, representing his optimistic outlook on life.

From the podium, Rahr said, “I just love the energy level of United Hatzalah, I just love everyone sitting here to do this mitzvah today.”

“This is the type of organization I relate to, starting from the bottom just like I started,” he said. “It took me a lot of work, just like Eli Beer and Hatzalah, from the bottom up. To see these wonderful ambucycles and to know they save lives—it is truly exciting. If you can save one life, it’s worth it, no matter how much you have to spend.”