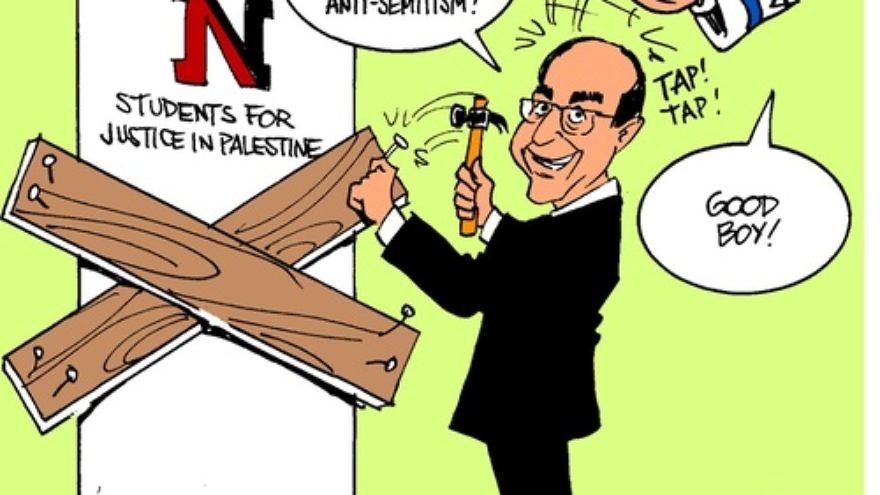 A cartoon posted on the Facebook page of Northeastern University's Students for Justice in Palestine chapter—which was recently suspended for a year—depicts University President Joseph Aoun nailing boards on the door of the student group. Mirroring the conspiracy theory that Israel controls American foreign policy, the cartoon features a disembodied arm from the sky—with a Star of David and “The Lobby” written on its sleeve—patting Aoun on the head. Credit: Northeastern SJP Facebook page.
Republish this article
1302 WORDS
Spread the word.
Help JNS grow!
Share now:

American universities have long been a place of political engagement, where rhetoric far from the sphere of mainstream political discourse is often the norm. But the recent suspension of a pro-Palestinian student group has thrust Boston’s Northeastern University into a national debate on what constitutes free speech and what crosses into anti-Semitism and intimidation.

The situation recently gained national attention after the Northeastern chapter of Students for Justice in Palestine (SJP)—ranked by the Anti-Defamation League as one of the top 10 anti-Israel groups in the U.S.—slipped 600 mock eviction notices under dorm room doors. SJP claims the fliers were intended to symbolize what the group says are arbitrary evictions of Arab residents of Israel. The action, however, spurred a swift rebuke from university administrators, who suspended SJP for one academic year.

“The undergraduate Students for Justice in Palestine organization at Northeastern has been temporarily suspended for multiple violations of university policy over an extended period of time,” said a March 17 statement from the university’s administration. “This decision was handed down only after a careful and thorough review of the facts, and only after repeated efforts by university officials to guide the leadership of the undergraduate SJP organization.”

According to Renata Nyul, director of communications at Northeastern, SJP’s violations spanned a period of two years and “included vandalism of university property, disrupting the events of other student organizations, not getting the appropriate permits when required, distributing unauthorized materials inside residence halls and sliding them under the doors of private rooms, not providing a ‘civility statement’ which was required after a previous sanction [and] not meeting with university advisers.”

Nyul pointed to the university’s Student Organization Resource Guide, which among other things prohibits “dorm storming”—sliding fliers under residents’ doors.

Northeastern law student and SJP leader Max Geller does not deny that his organization distributed the flyers without permission. But he said SJP is careful in choosing which methods to spread its message and that the university does not enforce the rules for other organizations. He also denied SJP’s involvement in the vandalism accusations.

“We are calculated and we would never do something so belligerent as defacing school property,” said Geller. “I would like to say, for the record, that it never happened and we were never formerly charged with that [vandalism]. They are sort of tacking it on to make a scene like we’re out of control and we’re undisciplined with our decisions about where and when to engage in speech.”

Still, SJP’s situation has attracted supporters such as the Massachusetts chapter of the National Lawyers Guild, the Center for Constitutional Rights in New York, and the American Civil Liberties Union.

“The bottom line is our three legal organizations view this as interference with freedom of expression on a university campus,” said ACLU Massachusetts staff attorney Sarah Wunsch. “It’s totally at odds with the nature of what a university is supposed to be about.”

But Jewish organizations on and off campus are claiming that SJP’s actions are going beyond acceptable speech—crossing the line into intimidation of Jewish students on campus.

Kenneth Marcus, president and general counsel at the Louis Brandeis Center for Human Rights Under Law and former staff director of the U.S. Commission on Civil Rights, says that SJP’s actions are part of a national trend among pro-Palestinian activists to create a hostile environment for Jewish and pro-Israel students. At first most visible at West Coast universities, such actions have spread to the East Coast, said Marcus. Some universities, he charged, are afraid to handle the problem.

Marcus said that under Title VI of the Civil Rights Act of 1964, the university could expose itself to legal action if it does not prevent students being subjected to a hostile environment due to their ethnic or ancestral characteristics.

“One of our concerns around the country is that administrations have much more difficulty dealing with anti-Semitism when Israel is involved, or when the perpetrators are members of other minority groups,” he explained. “We’re constantly hearing across the country that administrators are reluctant to take action against Palestinian or Muslim organizations for fear that they would be considered racist if they did so.

“The question for federal agencies is whether the situation has gotten so out of hand that a reasonable student in the position of a Northeastern undergraduate would have less opportunity to get an equal education,” Marcus added. Although Northeastern is a private institution, it must still abide by non-discrimination law because it receives federal funding.

Although the university acted in response to the February incident, Northeastern has been accused in the past of not fostering a welcoming environment for Jewish students.

In July 2013, the Zionist Organization of America (ZOA) conducted interviews of Jewish students at Northeastern and sent a letter to university president Joseph Aoun describing instances the singling out and the intimidation of Jewish students by members of the student body and some professors. Aoun did not respond to the letter.

Susan Tuchman, director of the ZOA’s Center for Law and Justice, commended the university’s latest action to enforce its rules.

“My understanding is that the university is holding that group [SJP] to the same rules and policies that apply to everybody on campus, and that’s the right thing to do,” said Tuchman.

Tuchman said the purpose of the 2013 letter was to encourage the university to take action, adding that the standard ZOA uses to describe the difference between anti-Zionism and anti-Semitism is not just based on the organization’s beliefs. She pointed to a study released by the U.S. State Department in 2008 on what it called the “new anti-Semitism.”

“According to the EUMC [European Monitoring Centre on Racism and Xenophobia] definition,” the report concludes, “regardless of the motive, anti-Zionist and anti-Israel criticism become anti-Semitic when they entail: Denying the Jewish people their right to self-determination; applying double standards to Israel; using the symbols and images associated with classic anti-Semitism to characterize Israel or Israelis; drawing comparisons of contemporary Israeli policy to that of the Nazis; or holding Jews collectively responsible for actions of the state of Israel.”

SJP’s Geller denied that Jewish students were specifically targeted by the flyer drop and said the organization purposely avoided the campus Hillel and Jewish fraternity neighborhoods. He also claimed that no one would mistake the message for an anti-Semitic one.

“You might look at the flier for an instant and think, ‘Uh Oh. What is this?’” said the ACLU’s Wunsch. “But if you looked at it at all, it’s quite obvious that this is about the Palestinians and what happens to them and their housing by the government of Israel.”

“Some people have said that Northeastern has responded this way to please some of its donors,” she continued. “And if that’s the basis on which they’ve chosen to suspend SJP, that’s really shameful for a university to do.”

Those in charge of the Northeastern SJP’s Facebook group have apparently endorsed Wunsch’s contention, posting a political cartoon that depicts Aoun nailing boards on the door of the student group. Mirroring the conspiracy theory that Israel controls American foreign policy, the cartoon features a disembodied arm from the sky—with a Star of David and “The Lobby” written on its sleeve—patting Aoun on the head. A voice belonging to the arm says, “Good boy!”