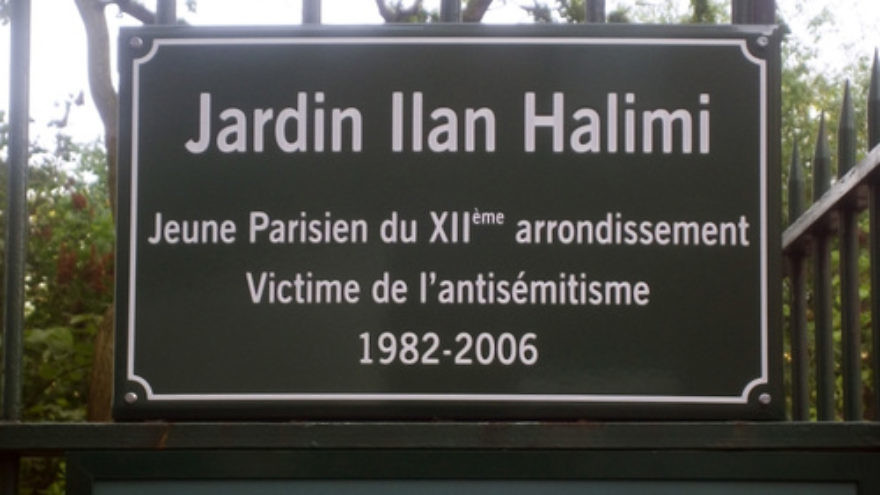 A plaque in Paris in memory of Ilan Halimi, the French Jew who was kidnapped and murdered in 2006. Credit: Poulpy via Wikimedia Commons.
Spread the word.
Help JNS grow!
Share now:

The report was compiled by the European Union Agency for Fundamental Rights, which was established to uphold human rights and fight all forms of racism. According to the report, 89 percent of Jews surveyed said that anti-Semitism in the E.U. had risen significantly in the past five years, with 85 percent saying that anti-Semitism was the most serious problem they faced.

The report is based on the largest survey on anti-Semitism conducted anywhere in the world, which included 16,400 respondents from 28 E.U. member nations.

Nearly one-third (30 percent) of respondents said they had personally experienced anti-Semitic attacks. Most of those were people whose appearance identified them as Jews.

Of the tens of thousands of Jews surveyed, 80 percent told the EUAFR that they  had refrained from reporting anti-Semitic incidents to the police or other authorities, thereby skewing official reports on the scope of anti-Semitism in a number of countries. A third of respondents said they chose to stay away from Jewish events or Jewish institutions out of fear for their personal safety.

Respondents reported that the most common anti-Semitic comments they encountered included “Jews have too much power and influence”; “Jews exploit the Holocaust for their own interests”; and “Israel treats the Palestinians like the Nazis treated the Jews.”

Yaakov Hagoel, vice chairman of the World Zionist Organization, said the report showed that decisions taken to combat anti-Semitism must be implemented immediately.

“Jews are loyal citizens of the countries where they have decided to live,” he emphasized, “and the governments of those European countries have a responsibility to ensure their safety.”